Washington: A Chinese blockbuster claiming defeat of the US Army during the Korean War has become the country’s biggest ever film.

The Battle at Lake Changjin is a three-hour epic that depicts Chinese soldiers battling US troops during the bitter cold of the 1950-1953 Korean war, highlighting a victory that the Chinese claim was a turning point in the conflict. 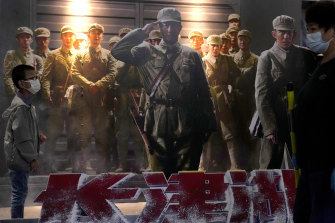 War movie “The Battle of Lake Changjin” has been a massive hit in China.Credit:AP

The film has been such a runaway hit that fans have even been inspired to eat frozen potatoes in homage to the soldiers who endured extreme hardships.

By Wednesday it reached the same revenue earned by the 2017 action film Wolf Warrior 2, but it is still in cinemas and accounts for 7 per cent of all films being shown.

It has taken at least 5.69 billion yuan ($1.25 billion), becoming China’s highest-ever grossing film, according to Maoyan, an online movie ticket booking platform. The film was released to coincide with the October 1 national holiday, and the ruling Communist Party is often keen to ensure a patriotic spirit around such events.

One scene in the film shows soldiers chewing frozen small potatoes between battles while their US counterparts feast on Thanksgiving turkey. 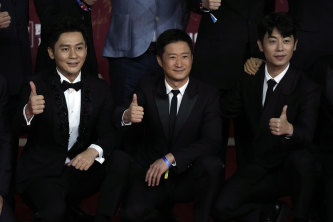 Actors from the movie “The Battle at Lake Changjin” from left, Li Chen, Wu Jing and Zhu Yawen.Credit:AP

Some cinemas have distributed frozen potatoes to audiences before the movie, according to videos on Douyin, the Chinese version of TikTok, with many showing moviegoers eating them or the fried flour that was also eaten by Chinese soldiers.

A young woman in one video cried after the first bite, saying that it was impossible to eat. “The frozen potatoes they ate give us the good life we have today,” another Douyin user said.

The war ended in an armistice rather than a peace treaty or blowout defeat for either side, leaving US-led UN forces technically still at war with North Korea.

A sequel, Water Gate Bridge, is in the works, according to local media reports.

China is now the world’s second biggest film market after the United States, underscoring its importance as a key market for Hollywood’s moviemakers.

However, Chinese filmgoers have been shifting to local content in recent years amid rising patriotic sentiment. The Chinese government has imposed a quota of 34 imported films each year, many of which are produced by major Hollywood studios.

Elsewhere, a documentary about pro-democracy protests in Hong Kong won an award at the Golden Horse Awards, the Chinese-speaking world’s Oscars, in Taiwan yesterday.

Kiwi Chow’s Revolution of Our Times was named best documentary, prompting a long round of applause and shouts of support for Hong Kong from audience members at the glitzy event in Taipei. Chow, who sent a pre-recorded message from Hong Kong expressing thanks for the award, dedicated the film to Hongkongers, saying he hoped it would bring them some comfort.