Washington: The Taliban would roll back much of the progress made in Afghan women’s rights if they regain power, according to a US intelligence assessment released on Tuesday.

The US National Intelligence Council report appears to reinforce fears that the Taliban will resume the harsh treatment that women and girls suffered under their 1996-2001 rule should the insurgents prevail in a full-blown civil war. 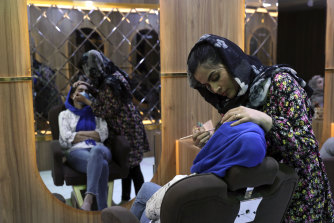 Sultana Karimi applies make-up at a beauty salon in Kabul. Some Afghan women fear the return of the Taliban and their hard-line stance on women’s rights.Credit:AP

“The Taliban remains broadly consistent in its restrictive approach to women’s rights and would roll back much of the past two decades of progress if the group regains national power,” said the US intelligence community’s top analytical body.

The council’s “Sense of the Community Memorandum” said women’s rights could be threatened after the US-led military coalition withdraws, a finding reflecting the conservative nature of Afghanistan’s male-dominated society.

“Progress [in women’s rights] probably owes more to external pressure than domestic support, suggesting it would be at risk after coalition withdrawal, even without Taliban efforts to reverse it,” the assessment said.

US President Joe Biden’s decision to withdraw the last 2500 US troops – triggering a pullout of other foreign forces – is fuelling fears Afghanistan could plunge into an all-out civil war that could return the Taliban to power.

Those concerns have been stoked by a deadlock in US-backed peace talks, while the Taliban have intensified attacks on government forces after a missed May 1 deadline for the US troop departure.

Before being ousted by the 2001 US-led invasion, the Taliban imposed a harsh version of Islamic rule that included barring girls from school and women from working outside their homes and prohibiting them from being in public without a male relative.

Women who violated those rules often suffered humiliation and public beatings by the Taliban’s religious police.

However, the new report noted that many of those practices have continued in government-controlled areas and “years of war have left millions of women maimed, widowed, impoverished and displaced.”

Gains made in women’s right have been touted as a major accomplishment during the 20 years that US-led forces have been deployed, although mostly in urban centres.

The Biden administration has pledged to continue civilian assistance after US troops depart, including to women’s programs.

The US administration has also warned that Afghanistan would suffer isolation and sanctions if it backslides on human rights..

A February 2020, US-Taliban accord struck by the Trump administration specified a May 1 deadline for completion of a US troop withdrawal from America’s longest war.

However, Biden instead decided to complete the withdrawal before the anniversary of the September 11, 2001, al-Qaeda attacks on the United States that triggered the US-led invasion.

What in the World

A note direct from our foreign correspondents about what’s making headlines around the world. Sign up for our weekly newsletter here.