Last year, the British actress won for “After Love,” a melodrama she led after years of comedic roles and only getting her first acting job at 34. 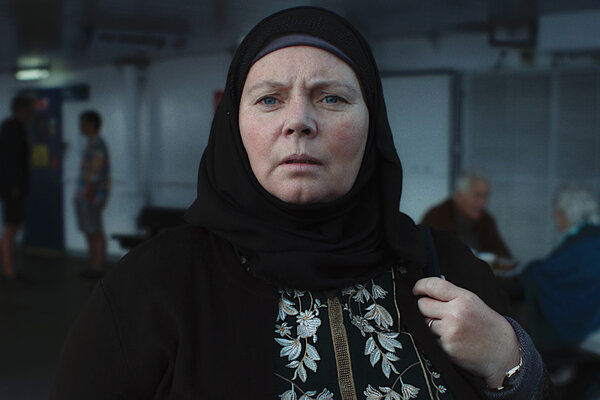 Joanna Scanlan had been a full-time acting teacher at a university for six years when she had a mental breakdown. She was 31. Her doctor blamed a lack of professional fulfillment for the collapse and warned her about the long-term consequences of hindered aspirations.

“Dr. Bloodworth said, ‘Are you living the wrong life? If you don’t go back to acting you’re going to be ill for the rest of your life,’” Scanlan recalled in a recent video interview from her home in London. “And as he said it, I thought, ‘That may be true. I’m not in the right work for me.’”

Scanlan took his advice. She left the university, but to stay financially afloat began working for the British body that distributes government arts funding. Eventually, the success of the 1995 installation piece “The Maybe,” which she developed with the actress Tilda Swinton, helped Scanlan get an acting agent. She landed her first acting job when she was 34.

Since that physician-prescribed epiphany, the British actress, now 61, has been consistently cast in film and TV for over two decades. But her first lead role in a feature film only recently materialized, with the indie drama “After Love,” in theaters Friday.

For the unassuming part, Scanlan transformed into Mary, a Muslim convert who discovers that her late husband had concealed a secret life. With little dialogue, but plenty of restrained expressiveness, she renders Mary’s complex state, caught between loss and betrayal.

The grief-stricken performance earned her the 2022 BAFTA award for best actress in a leading role, beating Hollywood-famous nominees including Lady Gaga and Tessa Thompson.

In a review for The New York Times, Beatrice Loayza praised the “restrained emotion of Scanlan’s minimalistic performance,” and made the film a Critic’s Pick. Mark Kermode, a film critic for the Observer, described Scanlan’s turn as “a master class in the dramatic power of understatement.”

The Projectionist Chronicles the Awards Season

Scanlan finds the glowing remarks hard to swallow. “I don’t feel comfortable around praise,” the actress said. “But I don’t want to be falsely modest either, because to not recognize that there must be some skill set at work is silly as well.”

Until “After Love,” the praise Scanlan received was mostly for the comedic roles on her extensive résumé. She has collaborated numerous times with the renowned satirist Armando Iannucci, in his Academy Award-nominated feature “In the Loop” and the series “The Thick of It,” both of which offer biting looks inside the British political machine.

While she can’t pinpoint what quality in her made others consider her for comedy roles, her approach has always relied on earnestness. “I try to play the serious truth of the moment,” she said. “The more you take it seriously as a character, the funnier it can become.”

Scanlan had always intended to pursue acting, but succumbed to life’s detours. She studied law and history at Cambridge University’s Queens’ College, where she joined the drama society and appeared in 23 student-generated stage productions over the course of two years.

But after graduation, and a romantic breakup with a partner with whom she was touring in a play, Scanlan lacked the connections and know-how to break into her dream career. At the time, performers in Britain also had to have a union card to act professionally, and she didn’t know how to obtain one.

For years she worked at her local community theater in the Docklands area of London, until she landed the academic position that precipitated her life-changing breaking point. “I never fit in with the grown-up life,” Scanlan said. “Somehow the child in me remained too strong and I needed to be able to try to earn a living out of that part of myself.”

By the time Scanlan switched careers, the acting union’s reduced power meant she no longer needed a union card to be cast. In hindsight, she concedes that her long-awaited transition happened at the right time. “All the life that I lived before has really helped me as an actor,” she said. “There’s a good thing about living hand-to-mouth with no access to any of the glamour.”

At home, no one ever suggested she’d be “better off as a lawyer or a doctor,” she said. Scanlan comes from a lineage of frustrated artists working less creative jobs: Her father wished to paint and sculpt, while her mother longed to be a writer. “Up to a certain point, I’m living their unlived lives,” she said.

From the years of struggling to attain a place in the entertainment industry, Scanlan developed an immense gratitude and pleasure in the process itself: “the moment between action and cut.” Unconcerned with the size of the part or the outcome of the final product, she said it was in the doing on a daily basis that she constantly reaffirmed acting as her calling.

Scanlan started writing in her free time when she left her university job, and learning to write for the screen became an extra tool to try to get herself cast. In 2009 the hospital sitcom “Getting On,” which she co-wrote and starred in alongside Jo Brand and Vicki Pepperdine, premiered on the BBC (a U.S. version was later created for HBO).

For audiences who know her from her comedy work, Scanlan’s quiet rendition of mourning in “After Love” may have come as a surprise, but for the director Aleem Khan it was Scanlan’s resemblance to his mother, who inspired the character of Mary, that initially led him to cast her.

Still, since Scanlan isn’t Muslim, the filmmaker had to ensure she was equipped to respectfully portray a woman of faith whose existence centers on ritual. To that end, Khan set up a meeting for his mother and Scanlan to learn about each other.

“My mom taught Joanna how to cook the curry that she cooks in the film,” Khan said in a recent video interview. She also brought Scanlan “a whole bag of clothes” to wear.

Naturally curious, Scanlan embraced the immersion, which included learning to pray authentically, Khan said. But even though the story’s protagonist is based on a real person, the situations in the plot were fictional. This allowed for some creative license.

For Scanlan, the role felt like stretching her range to embody somebody whose personality and experiences are distinctly dissimilar to hers. The privilege that actors have to get inside other people’s lives, she said, has helped her grow as a human being.

“Joanna is a deep feeler,” Khan said. “She can get lost in the emotion. That’s an important ability for an actor to possess, to allow themselves to become vulnerable.”

When she accepted her BAFTA, onstage at London’s Royal Albert Hall, Scanlan said she had to focus on the actor Benedict Cumberbatch, sitting below, to prevent the intensity of the moment from rendering her “completely inarticulate and speechless.”

“Some stories have surprise endings, don’t they,” she said from the stage.

Unaccustomed to that kind of glamorous attention, Scanlan joked in the interview that she worries the spotlight could turn her into an “almighty diva who’s going to just be demanding my own sushi chef.” As she grapples with the trajectory of her journey, from her doctor’s warning to the BAFTAs, her hope is that the accolades for “After Love” mean other stories about people rarely depicted onscreen, such as a Muslim widow, can continue to be made.

“If this machine of awards-giving that I’m lucky to have been a recipient of is part of allowing those stories out into the world,” she said, “then it’s a wonderful thing.”