Julianne Moore plays a parent to a son (Finn Wolfhard) with whom she fails to see eye-to-eye in this comedy directed by Jesse Eisenberg. 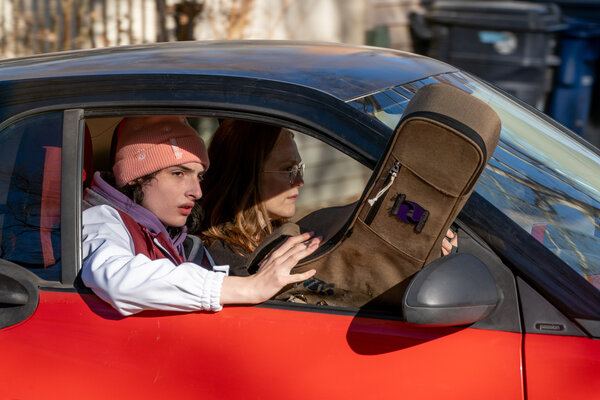 “When You Finish Saving the World” is, for better or worse, exactly the movie one would expect from the actor, writer and playwright Jesse Eisenberg: wordy, whiny and self-consciously wry. Adapted from his 2020 audio drama of the same name, this slight debut feature alights on a mother-son dynamic so cringe-inducingly toxic that we can sympathize only with the man of the house (Jay O. Sanders), an academic who exists mainly to complain about his own irrelevance.

And not without reason, when neither his wife, Evelyn (a firmly deglamorized Julianne Moore), nor their teenage son, Ziggy (Finn Wolfhard), bothers to attend his promotion to chancellor. Evelyn’s exhausted-hippie look and teeny-tiny car fit perfectly with her job at a shelter for victims of domestic abuse, where she oozes the empathy and attention she denies her son. For his part, the perfectly named Ziggy (his head is filled with stardust) is a self-involved twit who cares for nothing except nurturing his professed “passion and charisma,” livestreaming his dorkily fervent folk rock to a rapt audience of international tweens.

When Evelyn, her voice thick with censure and disappointment, inquires about Ziggy’s future plans, he reveals aspirations that go no further than acquiring more followers and more generous tips. Where, she wonders, is the darling child who used to accompany her on protest marches? (Pete Seeger’s rousing version of Woody Guthrie’s “Union Maid,” stomping over the film’s end credits, is an unexpected pleasure.) Once, Evelyn dreamed of editing Rolling Stone; now she dreams of having a son like Kyle (Billy Bryk), the sensitive, caring young man whose mother is one of Evelyn’s abused residents. Deciding that Kyle is too special for the blue-collar life he’s contemplating, Evelyn resolves to help him ascend the class ladder, one Ethiopian meal and college application at a time.

Set in suburban Indiana for no apparent reason other than Eisenberg’s fondness for the state (we barely see beyond a handful of indoor locations), this dramatically flat picture, too tidily and predictably resolved, is never more than glancingly funny. The milieu is comfortably upper-middle class, but it’s a cold comfort, and much of it doesn’t ring true. Ironically, the movie’s most credible sequences involve Ziggy’s pretensions, emerging from his infatuation with Lila (a sharp Alisha Boe), a politically engaged classmate who writes earnest poetry slamming colonialism. Ziggy doesn’t understand her social conscience, but he wants it, partly because he’s a hollow that needs filling, but mostly because he believes it can be monetized. He’s not interested in developing a point of view; he just wants to learn how to perform one.

Eisenberg has already proven himself a smart wordsmith and a knowing performer of emotional unease, but this “World” is a disappointingly shallow tale of narcissism and negligence. When these characters become too tiresome to listen to, though, look at their surroundings: Working with the excellent cinematographer Benjamin Loeb, Eisenberg displays a promising visual instinct, giving the family a home that’s shadowed and sad, spacious yet suffocating. The dinner-table scenes alone are nightmares of estrangement.

Casually satirizing the empty suck of social media and a do-gooder impulse that’s practiced solely with strangers, “World” is at times almost cartoonishly cruel. One scene in particular shows Evelyn, in a “nyah-nyah-nyah” singsong, snidely deriding Ziggy’s music. For the first time, in his pained expression, we see the defensive nature of his overweening self-regard; and had Eisenberg used this moment, and others like it, to deepen and enrich his characters, they might have seemed genuinely redeemable instead of simply insufferable.

When You Finish Saving the World
Rated R for extreme rudeness and rotten parenting. Running time: 1 hour 28 minutes. In theaters.