The show, which was the first product of the streamer’s acquisition of comic-book company Millarworld, debuted on May 7. On Wednesday, Mark Millar, the Millarworld founder, announced that the cast had been let out of their contracts, effectively ending the series.

The show appeared in Netflix’s daily top 10 lists of its most popular titles in the week after its debut (Netflix counts a view if an account watches at least two minutes of a show or movie). And it was the top streaming original series the weekend of its premiere with US viewers watching 696 million minutes of the series from May 7 to May 9, according to the research company Nielsen.

But Netflix never announced viewership numbers for “Jupiter’s Legacy” as it has for its biggest hits in recent years, suggesting that the series didn’t live up to the expectations set by its sizable production budget (it cost $200 million to make including reshoots, according to reporting by The Hollywood Reporter’s Borys Kit).

While it made Netflix’s daily rankings, “Jupiter’s Legacy” fell short of other shows that have dominated those lists.

The series spent six days as the No. 1 show on Netflix in the US and 26 days in the top 10 shows, according to the streaming search engine Reelgood. 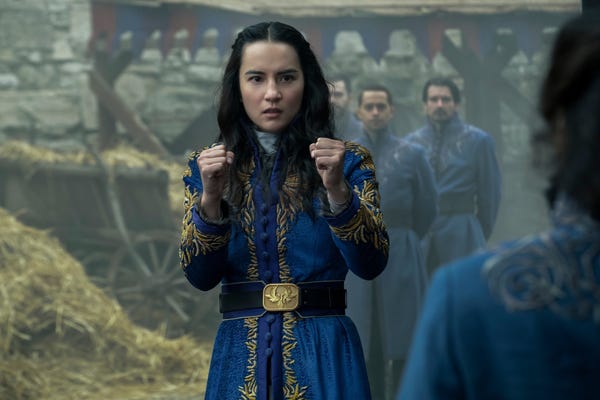 Netflix’s hit fantasy series, “Shadow and Bone,” which the streamer renewed for season two this week, was the No. 1 show for 12 days and spent 35 days in the top 10, according to Reelgood. Netflix said on Monday that the series was watched by 55 million households globally in its first week, placing it among Netflix’s top 10 original shows of all time.

“Shadow and Bone” was also watched for 1.2 billion minutes in the US over its debut weekend, according to Nielsen, well ahead of the numbers for “Jupiter’s Legacy.” Both shows’ first seasons included eight episodes.

“Jupiter’s Legacy” also fell short of other Netflix hits in its tenure on the streamer’s top 10 list.

The chart below breaks down the numbers: 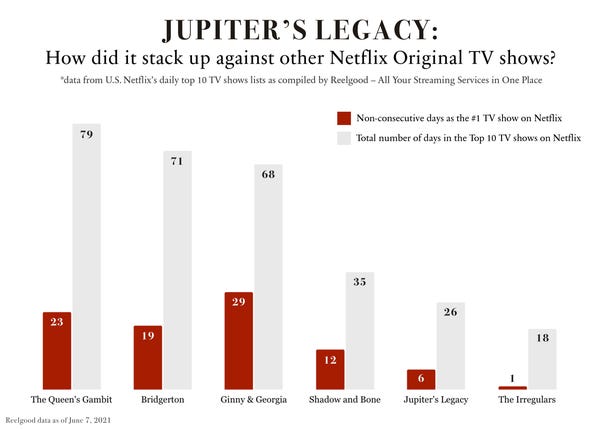 “Jupiter’s Legacy” also received poor reviews from critics and has a 38% critic score on Rotten Tomatoes, while “Shadow and Bone” earned an 87% critic score. In a review of “Jupiter’s Legacy,” CNN’s Brian Lowry wrote that it “moves in what feels like slow motion.” Rolling Stone’s Alan Sepinwall wrote that the series is “meant to be viewed with utmost seriousness, yet it feels like a parody where someone forgot to insert the jokes.”

Audience enthusiasm for the shows also diverged; “Jupiter’s Legacy” has a tepid 72% audience score on Rotten Tomatoes and “Shadow and Bone” has a more favorable 90%.

Since Netflix bought Millarworld in 2017, the streaming giant’s pursuit of genre-heavy IP has intensified as competitors like Disney and WarnerMedia focus on mega franchises to boost their own streaming businesses. Netflix introduced two new divisions last year to advance in this effort: the events/spectacle team, which oversaw “Jupiter’s Legacy,” and the franchise team.

While “Jupiter’s Legacy” is done, Netflix still intends to mine Millarworld for comic-book IP.

“Super Crooks” live-action and anime shows are in the works, set in the same universe as “Jupiter’s Legacy” but from the villains’ points of view. And series based on Millarworld comics like “American Jesus” and “The Magic Order” are also in development.