The long-running horror anthology has a new installment. 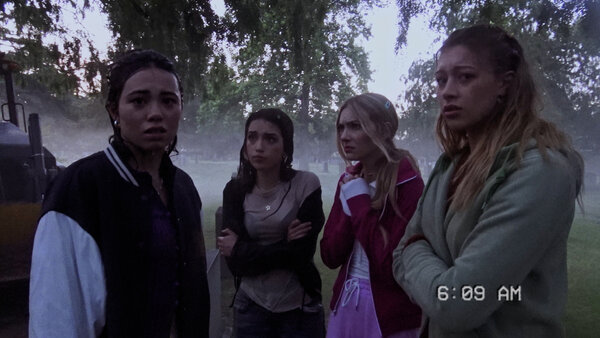 The problem with being buried alive, dramatically speaking, is that it’s hard for things to get worse. When screaming in a coffin, the sound of rain and dirt pitter-patting above, how do you raise the stakes?

In “Suicide Bid,” one of the gooey, squirmy shorts in “V/H/S/99,” the solid fifth installment of the found footage anthology series, Johannes Roberts, its writer and director, finds a way. While not wildly original, his jack-in-the-box surprises are skillfully, tautly executed. If you have a taste for schlock with shocks, this works.

When “The Blair Witch Project” popularized the found footage genre, the most maddening question in horror shifted from “Why did those fools go into that dark room?” to “Why don’t those idiots turn off the camera?” Rarely was there a great answer, but terror-addicts will overlook a lot of contrivances if you can scare or gross them out enough. While the “V/H/S” franchise has always been uneven, last year’s “V/H/S/94” was its best, featuring a cleverly shot entry in a funeral home by Simon Barrett and a giddily unnerving movie in the sewer movie by then-newcomer Chloe Okuno, whose latest feature “Watcher” has gotten raves.

Building on that success, “V/H/S/99” smartly dispenses with the wraparound plot that was always the worst part of all its predecessors, but finds a creative if unnecessary connective tissue. The shorts are better tied together by how they subvert current 1990s nostalgia, digging into the darkest side of Y2K and Woodstock 99 and other cultural artifacts from the final decade of the last millennium.

The director Maggie Levin sharply captures, skewers and celebrates the atmosphere of the Generation X indie music scene in “Shredding,” about a band that revisits the site of a concert disaster. In an idea so perfect it makes you wonder why you haven’t seen it before, “Ozzy’s Dungeon,” directed by Steven Ellison, a.k.a. Flying Lotus, explores the ugly undercurrents of the popular kids game show “Double Dare” where contestants were regularly humiliated by being splashed with colorful liquids (Steven Ogg is an ominously oily host). “Gawkers” performs a similar unpacking, but with “American Pie”-like comedies, but the creepy voyeurism of teenage boys receives a slithery comeuppance.

These revenge stories move methodically from the familiar to the monstrous. They lean into gore, excess and, critically, smirking humor. A commitment to its staticky, period-appropriate aesthetic is the only thing its artists take deadly seriously. Sometimes, the playfulness tips over into goofy camp as in the final short “To Hell and Back,” whose title tells you the plot but whose vibe is amateurish haunted house. Still, in the right mood, even that can be dopey fun.