Zack Snyder digitally inserted the comedian into the zombie flick to replace Chris D’Elia, but it’s not exactly seamless 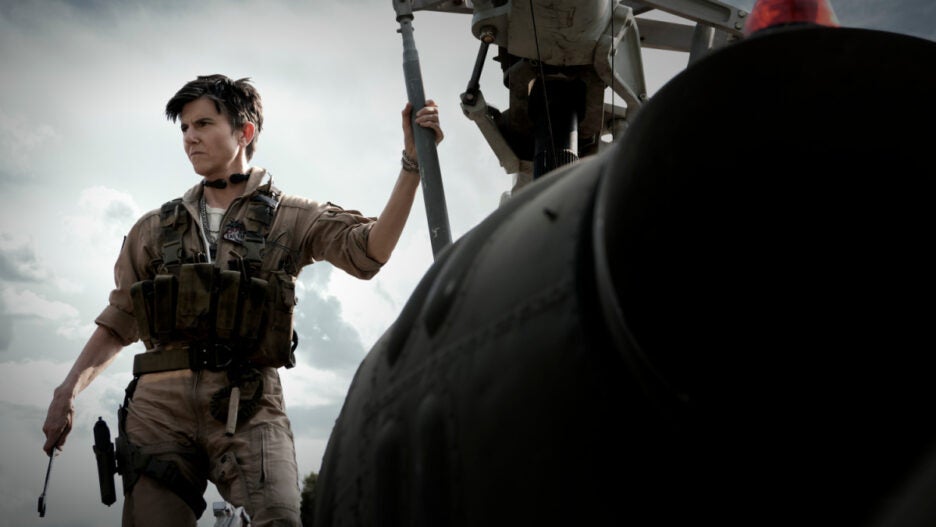 (Below you’ll find a few spoilers for Zack Snyder’s “Army of the Dead,” out now on Netflix”)

After comedian Chris D’Elia was accused by several women of grooming and sexually harassing them when they were underage, “Army of the Dead” director Zack Snyder didn’t exactly have a huge number of options for how to deal with the situation. The film had already been shot, with D’Elia in it in a key supporting role. Under the circumstances, digitally subbing him out in favor of a much better comedian in Tig Notaro was probably the best option, since the role is too crucial to the story to be completely removed.

In “Army of the Dead,” Notaro plays Peters — the helicopter pilot who’s gonna fly the crew out of zombie-infested Las Vegas after they pull off their casino heist. Peters is a crucial piece of the story, particularly toward the end of the movie. So it’s not really a role you can just get rid of without making some plot changes. Sure, there are other ways Snyder could have reworked the story so it functions without Peters, but this was probably the easiest option since it wouldn’t require the story to change much.

Unfortunately, the change is pretty distracting, because Notaro never quite looks like she’s in the same scene as everyone else. This is a hazard that comes with the territory when you’re trying something like this, and honestly there wasn’t much of a chance that Notaro would be a perfectly seamless addition — “Army of the Dead” is a mid-budget movie, not a mega-budget spectacular. There’s only so much you can do if you aren’t throwing all the money at it. 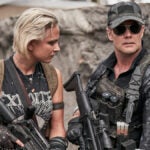 So let’s take a look at what I’m talking about, starting with a production still that Netflix released. 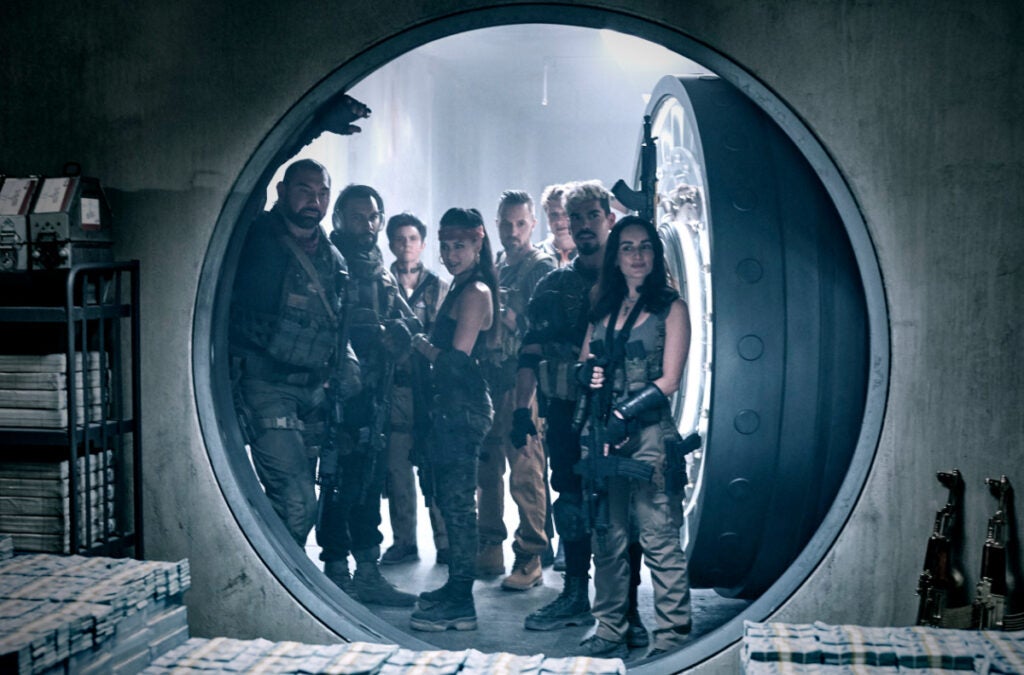 Notaro is not actually in this scene in the finished film — she’s on the roof of the building when they open the vault. I don’t know if that means this was just a photo they took for the marketing that they photoshopped her into or a deleted scene (my guess is the former). But it’s emblematic of what most of the actual shots with Notaro in “Army of the Dead” are like.

Let’s zoom in a little bit. 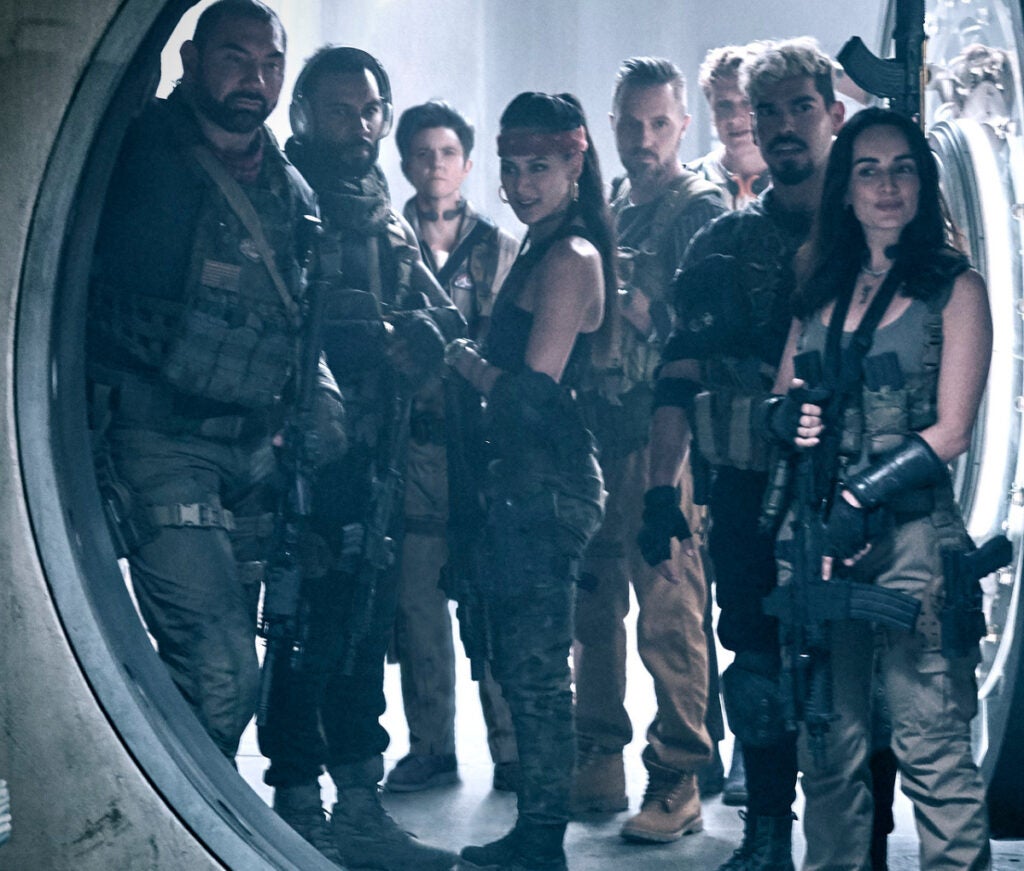 So the thing here is that all the other actors are looking at things in the scene. Except Notaro, who appears to be looking directly into the camera. This is generally what it’s like to look at her scenes. She’s not quite looking at what she’s supposed to be looking at, or the lighting doesn’t quite match up, or just her general look doesn’t quite fit, like she exists in a higher resolution than everyone else. It’s subtle uncanny valley-type stuff — they way Tig Notaro looks in the movie isn’t quite consistent with what the rest of “Army of the Dead” looks like. 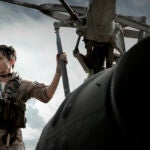 Most of the time, Snyder and co. try to work around this problem by not having her be in the same shots as the other actors. But that doesn’t really work either. A great illustration is her introductory scene with Dave Bautista and Ana de La Reguera. It’s a simple shot-reverse shot scene, but it’s weird. 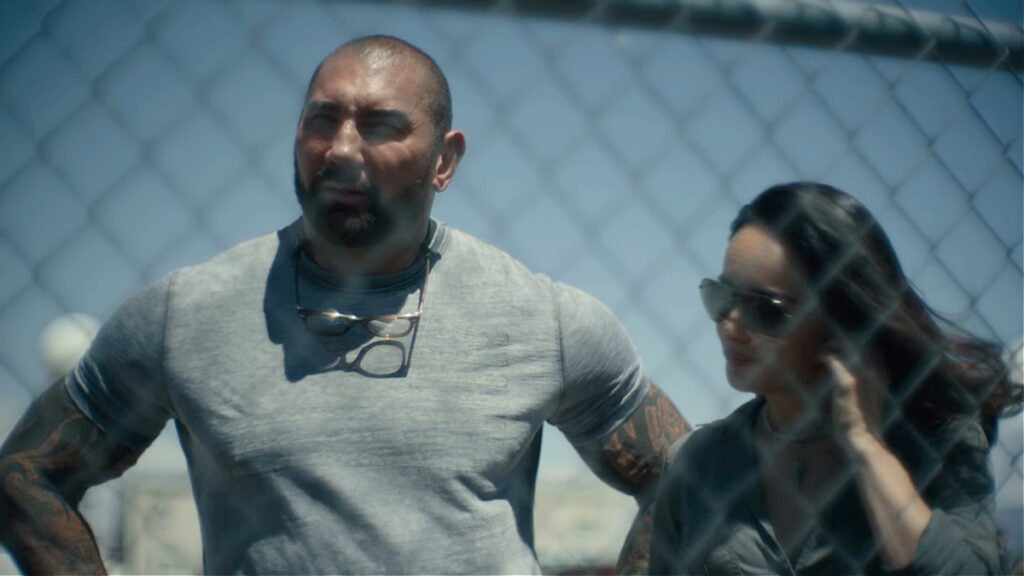 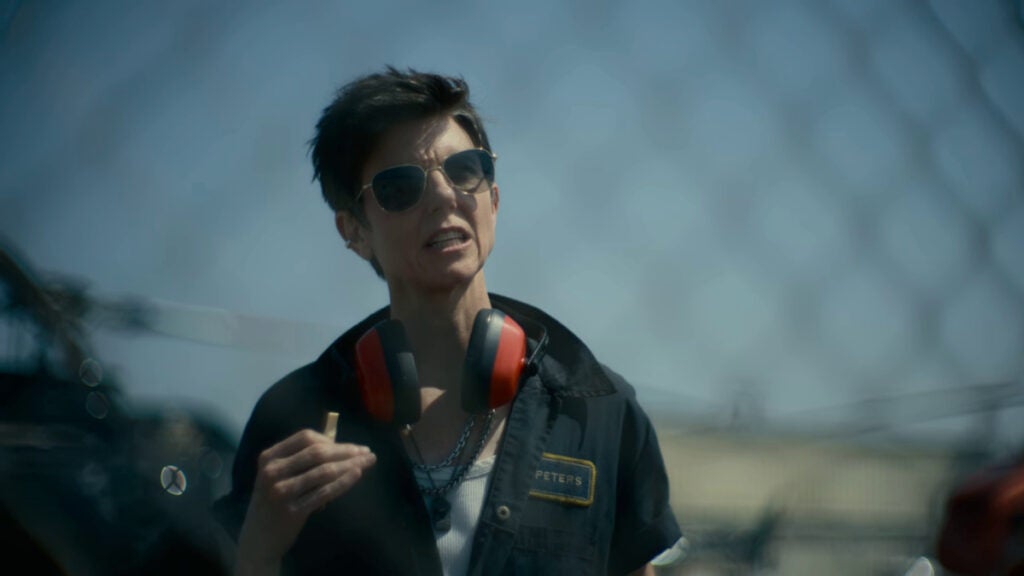 First thing here: the lighting, which is different on Notaro’s side of the fence than it is for Bautista’s side. For Bautista, the sun is directly above him — you can tell because the top half of his head is lit up, and everything below his cheeks is darkened by shadows. But for Notaro, the sun of on her left, because the entire right side of her face is shadowed, and the left side is well lit.

If you’re not buying it, compare the shadows cast by Bautista’s glasses to those cast by Notaro’s headset. The glasses shadow is directly down, while the headset shadow is down and to the left.

Notaro’s performance, meanwhile, doesn’t help. That’s not necessarily her fault though — her performance has the same whiff of awkwardness that we all know well from those parts of “Star Wars: Attack of the Clones” when Ewan McGregor would have to hold conversations with CGI characters. 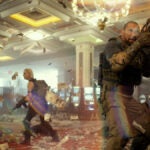 While acting against CGI has become a lot more mundane since then as actors get used to it, Notaro’s task in “Army of the Dead” is even tougher than that. It wouldn’t be easy for anyone to try to act in a scene without actually filming with other actors.

All of these little things add up, and they combine for an uncanny valley effect that is gonna be tough for most people to articulate. But I have a few more shots to illustrate maybe the biggest issue. 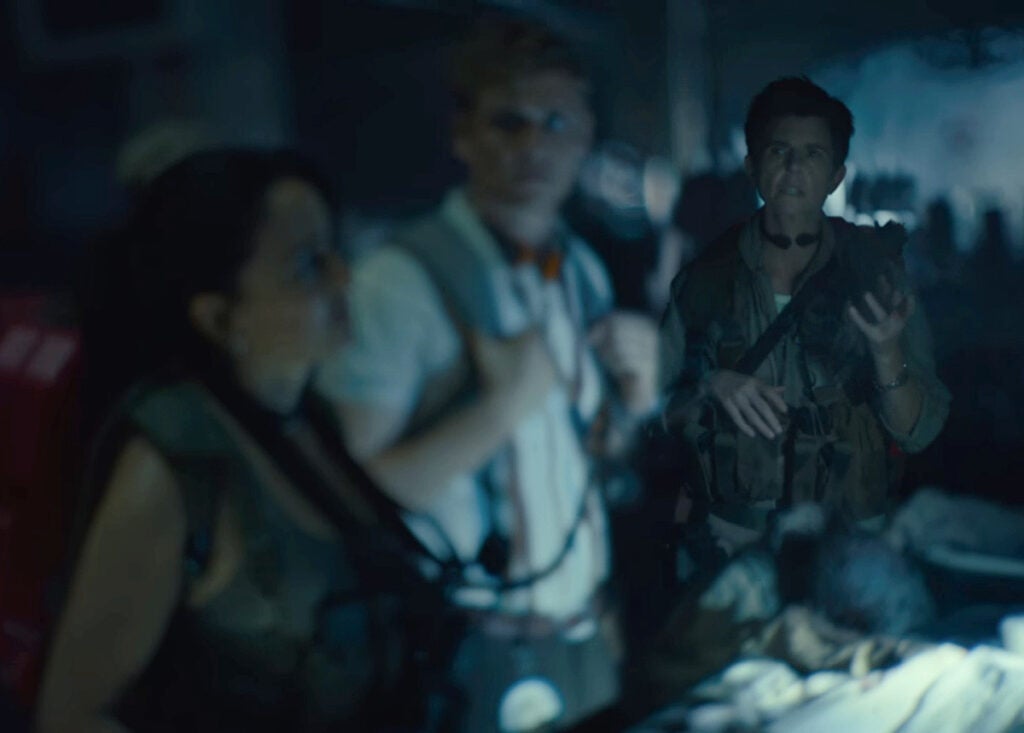 One of the defining visual aspects of “Army of the Dead” is its rather shallow depth of field — that’s why everything is out of focus all the time. But the depth of field on Tig Notaro is different than it is on everyone else. When she’s on screen and in focus, she tends to be completely in focus, which kinda gives her the look of a cardboard cut-out. Not always — but the depth of field on her is never quite what it is on the others. By contrast, look at this shot of Bautista from the same scene. 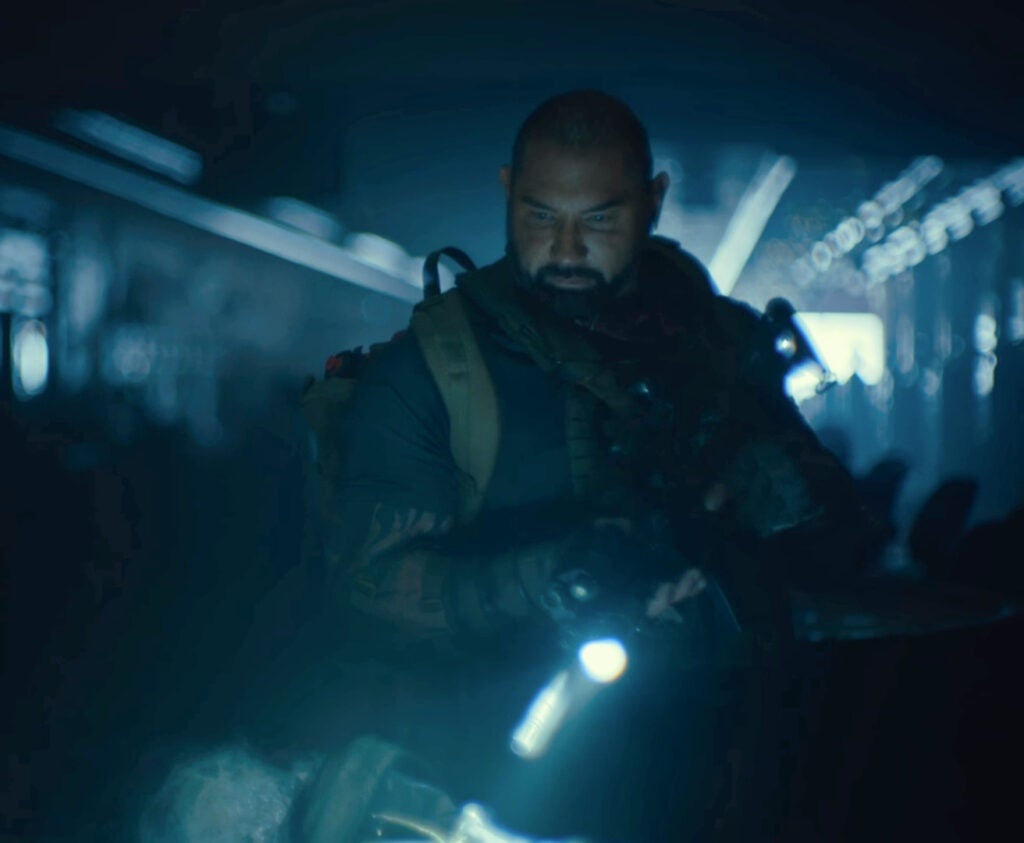 The difference between these two shots is that, even while Bautista is in focus, he’s still hazy around the edges. His left shoulder and the butt of his gun, for example. That’s an effect that would be extremely difficult to replicate with a digitally added human being, because you have to match this very specific look with a person who wasn’t there — and indeed it’s an effect that Snyder couldn’t really pull off with Notaro.

It’s certainly possible that it’s this visual style Snyder was going with on “Army of the Dead” that’s at fault for this specific issue. Would Notaro have felt more like a natural part of the film had Snyder not gone so hard with this depth of field effect? It’s possible, though of course it’s not as though Snyder knew he was gonna have to do this when he decided to go with this look, which is a major departure from his old style. Could he have implemented this change any better given the circumstances and this look that he couldn’t change? I have no idea. Maybe this is as good as it was possible to make this addition look.

Fortunately, Notaro really isn’t in “Army of the Dead” all that much. While it’s distracting every time Notaro pops up on screen, she spends a huge chunk of the movie by herself working on the helicopter, sorta quarantined away from everybody else. Had she been more prominent in the plot, this might have been a lot more annoying than it was.