The audacious sequel to Frant Gwo’s 2019 sci-fi blockbuster follows survivors working to avert planetary disaster, but it loses much of the glee of its predecessor. 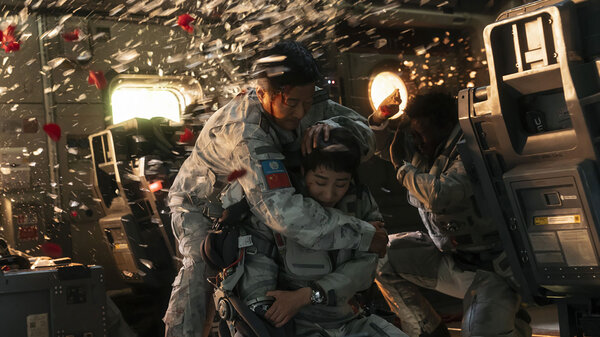 Upon its release, “The Wandering Earth,” Frant Gwo’s 2019 film about a dystopia in which Earth is perilously pushed through space, was minted as China’s first substantial, domestic sci-fi blockbuster, with the box office returns to prove it.

The film was entertaining enough, but its ambitious scope had something of an empty gloss to it, partly because the story’s drama wasn’t grounded in anything beyond the showy cataclysm. Its audaciously messy sequel, “The Wandering Earth II,” seems to have taken note and sprinted, aimlessly, entirely in the other direction. Losing all of the glee of its predecessor, the movie instead offers nearly three hours of convoluted story lines, undercooked themes and a tangle of confused, glaringly state-approved political subtext.

Boasting a bigger budget and greater expectations — the Hong Kong superstar Andy Lau has been added to the cast — “Wandering Earth II” is, narratively, a prequel. Gwo’s follow-up takes place years before the events of the first film and focuses on the United Earth Government’s initial efforts to push Earth out of our solar system, a move intended to avoid planetary disaster. It sets up flimsy ideas about dystopian geopolitics, man versus machine, and the nature of human consciousness (partly as a back story to the “2001: A Space Odyssey”/evil HAL 9000 knockoff plot of the first film).

This is all just in the first hour of setup, before the film does a fast-forward to the next conflict, years later, when humankind needs to nuke the Moon. The premise might be laughable, but silly narrative ideas didn’t get in the way of a good time in the first film. It’s hard to say how much of a true cinematic achievement “The Wandering Earth” was when it gave China its very own “Armageddon,” but after this sequel trips over its armful of melodramatic plotlines and conspicuously nationalist messaging, you’re left wishing you just savored the mindless fun the first time around.

The Wandering Earth II
Not rated. In Mandarin, with subtitles. Running time: 2 hours 53 minutes. In theaters.