What’s really going on with Brad Pitt and Andra Day? The twosome hit the headlines together after it was reported that Pitt and Day had supposedly been spotted together in April at the 2021 Academy Awards, and it sounded very much like dating could be in the cards.

An insider alleged to the Mirror at the time that Pitt had apparently had his eye on the stunning actor and singer for a little while and had seemingly tried to shoot his shot at the Oscars. “They were flirting backstage and are believed to have swapped numbers,” the source claimed. “It could be just professional, but some of [Pitt’s] pals have been talking about what a great couple they would make.”

The possible new couple then became the talk of tinsel town as fans, gossip columns, and shows — including “The Wendy Williams Show” — speculated about the twosome. But what’s really going on here?

Well, Day got very candid about her relationship with Pitt in June — and she dropped a bit of a bombshell about where she stands with the A-Lister. Keep scrolling to find out what she had to say. 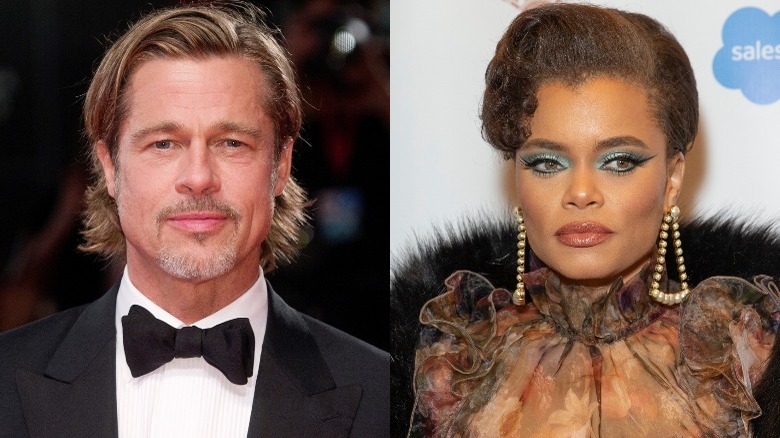 Brad Pitt and Andra Day sitting in a tree, K-I-S-S-I-N-G? Well, not so much. Day spoke out about the rumors she’s been getting close to the “Mr & Mrs. Smith” actor while attending the 2021 BET Awards on June 27 — and it turns out they’ve never even met!

Yes, despite all those swirling rumors they were flirting up a storm at the Oscars, Day shut down the speculation in pretty spectacular fashion. “Oh my gosh, child, especially because we’ve never met. I was like, ‘Oh, alright,'” she said of the moment she first heard about the gossip while chatting with Entertainment Tonight.

It turns out fans weren’t the only ones who believed they could’ve been an item, though. “My sister actually hit me up after, she was like, ‘You met Brad Pitt?’ I said, ‘I guess so. I guess we did,'” Day teased. “We’re not dating. We don’t even know each other,” she continued, calling all the rumours “hilarious.” The “United States vs. Billie Holiday” actor added that the speculation came from “thin air” and joked, “Somebody was bored that day.”

Well, we can’t get more of a denial than that. But while they’re definitely not dating right now, it sounds like it’s maybe not totally off the table? Day did reveal she’s a fan of Pitt’s, saying, “He’s great… super talented, wonderful.”

Looks like we’ll have to wait until these two actually meet to see if romantic sparks fly!