Will Sonya Barzel be Jamie Burns’ next victim?

In this exclusive clip from tonight’s season 3 finale of The Sinner, the somewhat-reclusive painter (played by Jessica Hecht) attempts to talk down an unhinged Jamie (played by Matt Bomer).

“Jamie, you could’ve hurt me by now, but you haven’t. You waited, because you wanted to talk,” Sonya suggests to Jamie. “That’s something! You can stop, you just, you choose. You choose to return to the world.”

Unsurprisingly, the ostracized teacher scoffs at this suggestion as he’s been turned away by his wife Leela Burns (played Parisa Fitz-Henley).

“Return to who? To a family that doesn’t want me anymore? To Harry Ambrose, the f–king hypocrite?” Jamie retorts.

As fans of the show surely know, Detective Ambrose (played by Bill Pullman) tricked Jamie into confessing to the manslaughter of Nick Haas (played by Chris Messina). With Sonya being Harry’s love interest and her home the scene of Nick’s death, it isn’t surprising that the crazed Jamie has confronted her. 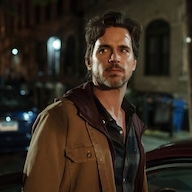 “Maybe we’re all hypocrites, maybe that’s the only way through a life,” Sonya adds.

Unhappy with this response, Jamie stands and informs Sonya that she “shouldn’t have stayed here.”

“You should’ve left,” Jamie states before turning and pulling out a knife.

What will become of Sonya? For that answer, be sure to catch The Sinner‘s season 3 finale tonight.

The Sinner airs Thursdays at 10 p.m. on USA.

(E! and USA are both part of the NBCUniversal family.)