As The Chase fans ready themselves for all-new episodes of the hit quiz show later this year, ITV has been filling the void with more chances to watch some classic head-to-heads from years gone by. On Monday, Bradley Walsh returned to front a classic episode from 2014 alongside Chaser, Anne ‘The Governess’ Hegerty. However, a number of fans using ITV Hub to stream the episode were disappointed to be told they were unable to do so.

“Are you kidding me @itvhub,” one angry The Chase fan tweeted shortly after the episode began.

“Why can I not watch #TheChase on my computer app? Wtf is this?!” (Sic)

A second was similarly perplexed: “#thechase Why is the chase not available on the Hub?”

While a third ITV viewer added to the discussion: “Anyone else’s itv hub now letting them watch?? itv 2 and all are fine though??? #thechase.” 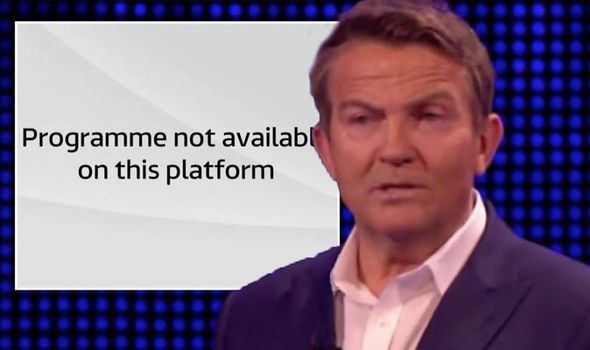 The disappointment didn’t stop there as a fourth was also left dismayed by the streaming change.

They said: “Why in the name of all that is holy is  #TheChase coming up as ‘not available on this platform’ on the @itvhub? @ITVChase @ITV.”

However, for those tuning into the episode live on television, they paid witness to a rather tense head to head.

The line-up consisted of players Rosemary, Dave, Lyndsey and Mark, and got off to a cracking start.