Novelist and former politician Jeffrey Archer joined Susanna Reid and Ben Shephard on Good Morning Britain to give his view on Boris Johnson’s flat revamp as a formal investigation looks into how he paid for the work. But ITV viewers saw a chaotic clash unfold as Good Morning Britain’s Ben tried to disagree with Jeffrey and was promptly shut down.

“This is the lead item on ITV when half a million people are dying in India,” Jeffrey argued.

“Let me point out one thing. When I was a young man, and I’m now an old man, John Kennedy became president of the United States.

“And his wife, Jackie, decided to design the entire White House and the nation was delighted.” 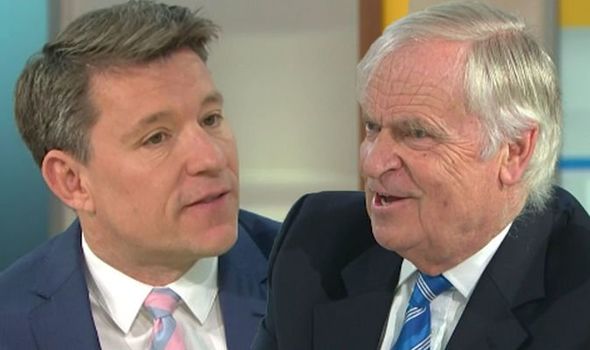 But Jeffrey slammed the debate surrounding the Prime Minister, ranting: “It’s ridiculous that we don’t design Number 10 to have a decent flat to allow whoever-“

“That’s a separate argument,” he was told as Ben went to comment: “Jeffrey, when you were in-“

But Jeffrey wouldn’t allow him to finish, snapping: “Wait a moment.”