The Sex and the City reboot — titled And Just Like That — is currently filming in New York City. New images from fans near the set reveal the cast dressed for a funeral. According to insiders, a major character death is coming in the very first episode. Fans want to know — who dies in And Just Like That…? 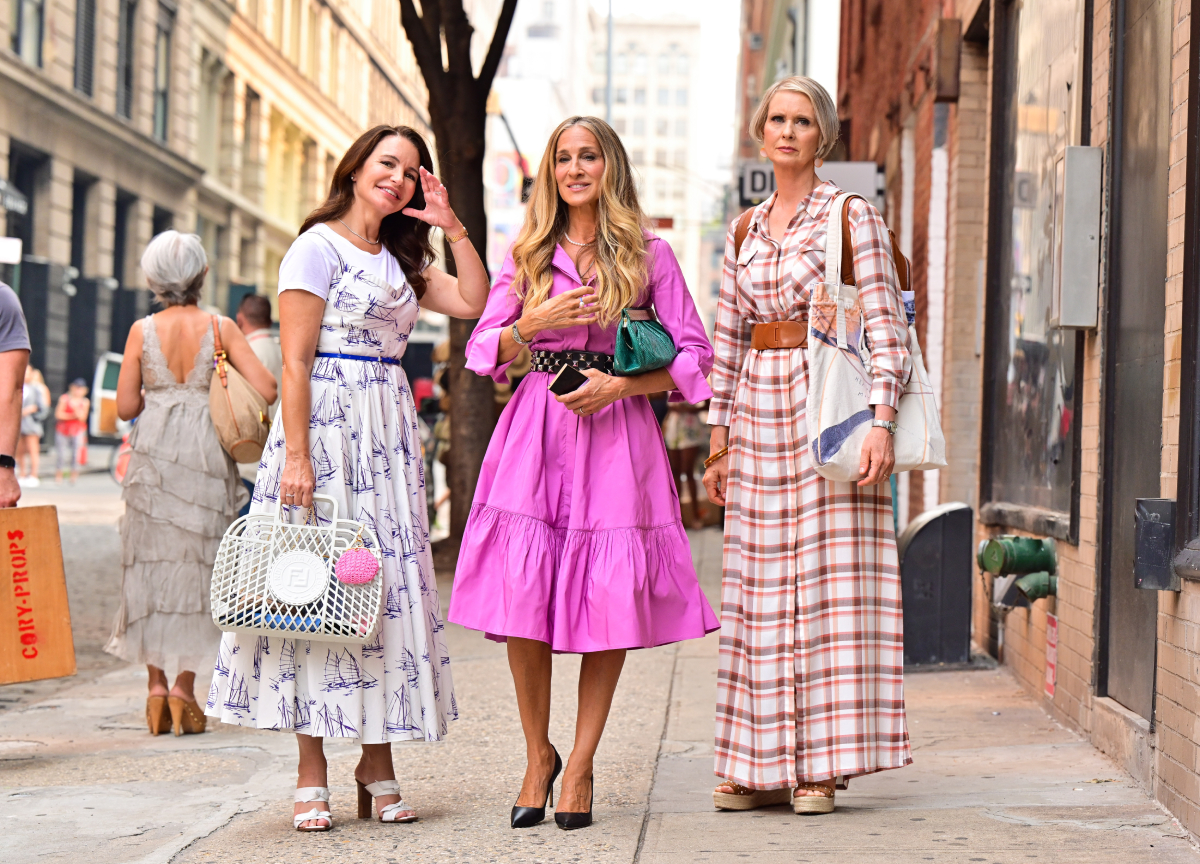 The ‘Sex and the City’ reboot is missing one major star

When HBO Max announced in January 2021 that a 10-episode Sex and the City reboot was in the works, it was revealed that only three of the show’s four leads would be returning. Sarah Jessica Parker is reprising her role of Carrie Bradshaw. Kristin Davis is back as Charlotte York, as is Cynthia Nixon as Miranda Hobbes.

The one notable omission from the cast list was Kim Cattrall, who opted not to reprise her role of Samantha Jones. It’s no secret that Cattrall and Parker have had a strained relationship for years. Cattrall made it clear in 2017 that she was “moving on” from the character and had no desire to return for other Sex and the City projects.

Chris Noth is back as Mr. Big

As fans know, Carrie married Mr. Big (Chris Noth) at the end of the first Sex and the City movie. But by the sequel the couple was having trouble. She even had a romantic liaison with ex-fiancé Aidan Shaw (John Corbett), which she later confessed to Big.

The couple managed to stay together, and they renewed their commitment to each other. But, new set images indicate they are in trouble. Noth is definitely part of the cast, and he’s been spotted filming with Parker. But they were rehearsing a tense scene that indicated the two characters were having a “strained conversation,” according to Page Six.

Who dies in the ‘Sex and the City’ reboot?

Carrie and Mr. Big have had a tortured romance since the Sex and the City pilot episode. And the images from the scene rehearsal — plus the latest rumors — have fans worried. According to The Daily Mail, an insider claims that a character will be killed off during the first episode. And, “it is going to be a big death.”

“This is all top secret at the moment, because production has just started. But in the first episode fans will be served up a jaw-dropping storyline where one of the major names on the show will die,” the source dished.

This has led to speculation that Noth’s return as Mr. Big will be short-lived, and it’s his character that will be killed off. But, there’s also the possibility that the major character death would be Cattrall’s Samantha Jones. Only senior cast and crew know which character has been killed off, and they are reportedly sworn to secrecy.

“Only the leading stars and show executives are aware of this presently and are desperate to keep a lid on it – a coffin lid,” the insider noted.

According to inside sources, the shocking death in the first episode of And Just Like That… will prompt Carrie — who is now a podcaster — to reunite with characters that she’s had rocky relationships with throughout the original TV series.

Parker reportedly wanted to “shake up audiences from the get-go to make them realize this is a different paced show from the previous one, where anything can happen and anyone can go…just like life.”

“We have been implored not to say anything or divulge any other info, because HBO wants this to be one of their huge promotional points for the launch,” the insider explained.

The insider says that a lot of drama is in store for fans when And Just Like That… hits HBO Max next year.

According to the series description, the ladies will “navigate the even more complicated reality of life and friendship in their 50s.”

One script leak revealed that Carrie and Big are getting divorced. Another indicated that Carrie tells her friends she isn’t “in a good place.”

“I was taping the podcast, I was washing my hair. Yes, I wasn’t eating or sleeping, but at least I felt good about my marriage. Now I’m just one of the wives he was taking care of?” the script reportedly reads.

“From what we have read so far there are plenty of twists and turns ahead,” the source dished.