Ant and Dec’s Saturday Night Takeaway has been an ITV staple in recent years as the pair get up to their various antics much to the delight of those watching at home. Tonight’s episode marked the final part of the current series and Ant made sure he gave viewers something to laugh about as he presented the show with a full face of very vivid make-up.

The ITV show is just one of many that has been affected by the coronavirus spread in recent weeks.

Last week, Ant and Dec were forced to present the show without a live studio audience following new government advice.

Tonight, the pair came from a different setting entirely after the Boris Johnson urged people to stay in their homes.

Dec announced they were: “Coming to you from our living rooms,” to introduce links to some of the show’s most iconic pranks. 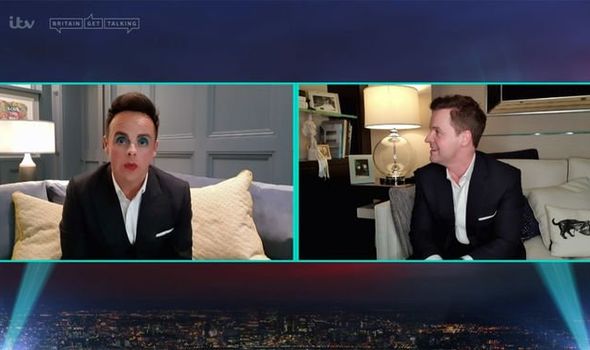 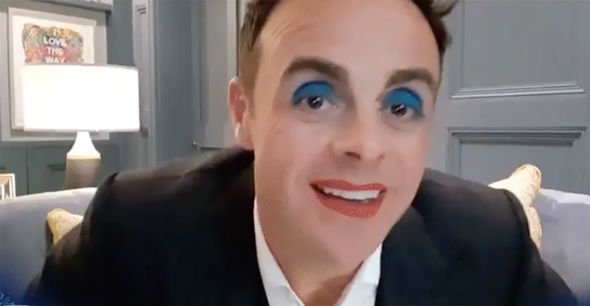 Not quite getting the memo, Ant turned up in a more casual outfit than usual as Dec donned his signature suit.

One wrote: “Love how Dec is dressed in full on suit and Ant is in his comfy clothes  #SaturdayNightTakeaway.” 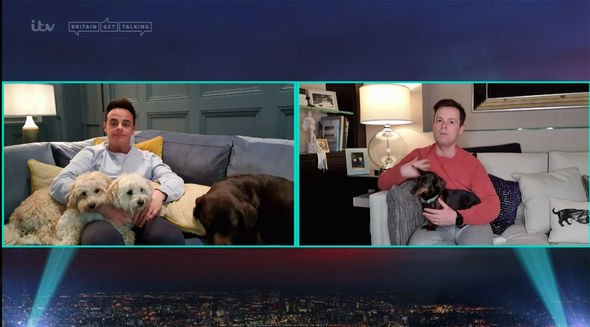 Ant returned later on in the show, caving into his co-host’s request and joining him in wearing a suit as Dec asked: “Are you made up?”

However, Dec informed him he got the wrong end of the stick, replying: “No, I mean make up on your face. You need make-up on your face if you’re going to be on prime time Saturday TV.”

Ant went off again to fix his face but the star returned with a full face of make-up, featuring some very prominent blue eyeshadow.

Viewers were left in hysterics by Ant’s next look, taking to Twitter to comment on his appearance.

One wrote: “I burst out laughing in the middle of the night! Wasn’t expecting that!!”

Another echoed: “@antanddec Ant in full make up has made my Saturday night best laugh X #SaturdayNightTakeaway.”

“Speaking from a beauty therapist…he’s not done a bad job of his lipstick,” commented another.

Right at the end of tonight’s show, the pair caused another storm when they brought some extra special guests – their pet dogs.

Fans were thrilled to see the pooches on air as one fan remarked on Twitter: “Ant and Dec with their dogs was exactly what this country – nay, the world -needed right now  #SaturdayNightTakeaway.”

Another shared: “Well done lads, that must’ve been a hard show, you did brilliantly! And I love your dogs #SNT #SaturdayNightTakeaway @itvtakeaway @antanddec @ITV.”

“Dec’s dog has been the star of the show tonight let’s be honest #SaturdayNightTakeaway,” added a third.