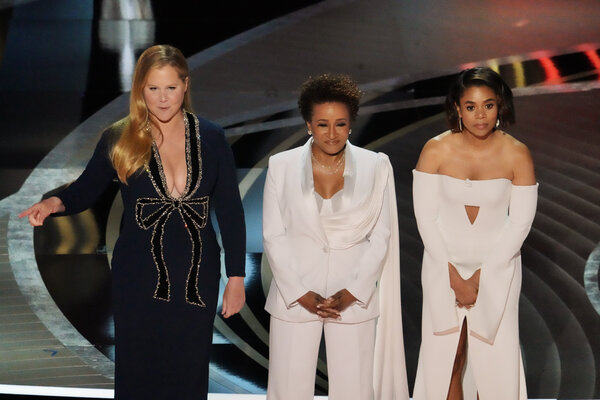 After several years without a single host, the Oscars got going Sunday night with three of them.

The comic actresses Regina Hall, Amy Schumer and Wanda Sykes were not, as it turned out, the first three people viewers saw at the top of the telecast. That honor went to Venus and Serena Williams and then to Beyoncé, who offered a performance of the Oscar-nominated song “Be Alive,” from “King Richard.”

But soon after, the three hosts emerged, with a little help from DJ Khaled, who introduced them.

“This year, the academy hired three women to host because its cheaper than hiring one man,” Schumer said.

Her quip was among the first of several in an opening monologue that toggled between all three women. It was a fast-paced avalanche of witty snipes, rapid-fire roasts and a sprinkle of Hollywood pomp and circumstance as the hosts began their evening-long quest to reverse the Oscars rating slide. Among their early targets were the length of “Power of the Dog,” Florida’s “Don’t Say Gay” bill and the Golden Globes.

The 94th Academy Awards will be held on March 27 in Los Angeles.

It had not been entirely clear before the show began how the three hosts would share time and responsibilities. At a news conference on Thursday, Hall and Sykes said that all three would be onstage together to open the show and that at other points in the program, they would split up.

Sykes also said she did not want to fire off meanspirited jokes, but in an interview with The New York Times later Thursday, added that nothing was off-limits.

The opening minutes of the telecast Sunday offered some early hints at their approach, suggesting that each of the hosts would enjoy solo time in which they play to their professional strengths and personal brands.

Our Reviews of the 10 Best-Picture Oscar Nominees

“Belfast.” In this charming memoir, the director Kenneth Branagh recalls, through a rose-tinted lens and black-and-white photography, his working-class childhood in a turbulent Northern Ireland.

“CODA.” A shy 17-year-old is the lone hearing member of her rambunctious family. As she confronts a newly awakened desire to sing, her efforts to share her musical talent with her deaf relatives are remarkably affecting.

“Don’t Look Up.” Two astronomers discover a comet headed straight for Earth. When they pass along the bad news, the president of the United States has other things on her mind to pay attention to than the impending catastrophe.

“Drive My Car.” A theater director grapples with the death of his wife, as he mounts a production of “Uncle Vanya.” A chauffeur assigned by the theater company ferries him to and from work while holding back vast emotional reserves of her own.

“Dune.” In this adaptation of Frank Herbert’s science-fiction opus, the young scion of a noble family departs for a desert planet home to monstrous sandworms, enigmatic Bedouin-like inhabitants and an addictive, highly valuable resource called spice.

“King Richard.” This two-for-one superhero origin story follows young Venus and Serena Williams in their ascent in women’s tennis, as they fulfill an ambition that their father had conceived before the two were born.

“Licorice Pizza.” In Paul Thomas Anderson’s coming-of-age romance, a child performer who has hit maximum adolescent awkwardness is aging out of his professional niche. His encounter with 20-something Alana, whom he instantly falls for, gets the story’s juices going.

“Nightmare Alley.” A grifter with empty pockets and a mysterious past joins the sleazoid world of 1930s back-road carnivals. He soon begins cycling through women, including a clairvoyant whose husband once had a successful mentalist act.

“The Power of the Dog.” Phil Burbank has been playing cowboy his entire adult life, raising cattle on his family’s Montana ranch for decades. When his brother George marries a widow with a teenage son, a lifelong family dynamic is disrupted.

“West Side Story.” Steven Spielberg’s remake of one of Broadway’s most celebrated musicals — a modern take on “Romeo and Juliet” — centers on the forbidden love between Tony and Maria, who are involved with two rival street gangs in Manhattan’s West Side in the 1950s.

Schumer, a self-professed “meanspirited” comedian, returned to the stage by herself after the opening three-person monologue and fired off a scathing one of her own. (Among the people and movies she jabbed at: Aaron Sorkin, Nicole Kidman, and “King Richard.”

Hall later called up male actors up to the stage for so called emergency Covid tests and joked about her need to swab and inspect them.

Here’s what Hall, Schumer and Sykes had to say in the opening monologue.

Regina Hall: We are here at the Oscars.

Amy Schumer: This year, the academy hired three women to host because it’s cheaper than hiring one man.

Hall: But I’m still excited to be hosting, representing Black women who are standing proud.

Sykes: Yes, and living out loud.

Schumer: Yes, yes. And I am representing unbearable white women who call the cops when you get a little too loud.

Hall: You know, we’ve been dealing with Covid for two years. It’s been really hard on people.

Schumer: As many of you know, a decision was made to present some behind-the-scenes awards in the first hour.

Sykes: It was a controversial and difficult decision, but you know, I think we’ve moved on. [Lights flicker.]

Schumer: It’s not our decision.

Sykes: You know, there was a lot of snubs this year. Rachel Zegler for “West Side Story.” Jennifer Hudson for “Respect.” And Lady Gaga and Jared Leto for “House of Random Accents.”

Hall: You know, I was very disappointed that “Space Jam” 2 did not get nominated in the special effects category for that hairline they gave LeBron James.

Sykes: Black Twitter is going to love that one.

Hall: I think so.

Schumer: Yeah, what is that?

Hall: You know, this year we saw a frightening display of how toxic masculinity turns into cruelty towards women and children.

Hall: I know. I know. But, you know, I was actually talking about “The Power of the Dog.”

Sykes: Oh, yes. You know, I watched that movie three times, and I’m halfway through it.

Schumer: You’re at the best part. The best.

Hall: One more week, and you’re in there.

Sykes: Stay with it.

Schumer: Stay with it.

Hall: You know, Samuel L. Jackson is here. Yes, there he is. He just got the Governor’s Award for his lifetime body of work.

Sykes: I mean, I love him. You know, he’s my guy. But I’ll be honest, there’s a few holes in his résumé. No, for real. Like where’s the Sam Jackson rom-com? Like where’s Sam Jackson and Jennifer Lewis in “When This Mo-fo Met That Mo-fo,” you know, or the sequel “Bitch, I said I love you.”

Schumer: He likes that. He likes it. [Looking at Jackson.]

Schumer: Regina, I mean, it’s not the time for that. And providing the soundtrack for the next hour, give it up for the incomparable D-Nice.

Together: Welcome, everybody, to the Oscars!