GMB: Richard Madeley slams Gove for not self isolating

The Chancellor of the Duchy of Lancaster received an alert from the coronavirus Test and Trace app following a trip to Portugal notifying him he’d been into contact with someone who had the virus. Usually this would mean Michael Gove would have to self-isolate for 10 days but it’s since been revealed he is part of a new pilot scheme which could mean he doesn’t have to quarantine for as long.

As part of the new pilot scheme, Mr Gove will be tested every day for a week rather than isolating for 10 days.

The cabinet minister and his two sons were at the Champions League final in Portugal along with 12,000 other fans.

Many of those who flew to Portugal ave since been contacted by the NHS Track and Trace app.

Addressing Mr Gove’s involvement with the pilot scheme to test for the virus every day, Madeley made it clear he was not impressed as he spoke to Robert Jenrick. 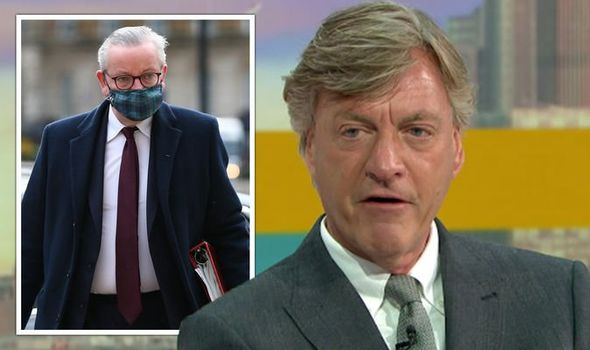 “Forgive my cynicism but we talk about caution, how is it that your cabinet colleague Mr Gove has been pinged on Track and Trace and yet unlike the rest of us, he doesn’t have to isolate, he’s just doing tests,” Madeley asked.

Jenrick replied: “Well I haven’t spoken to Michael so I don’t know all of the details of what’s happened to him but it sounds like the system worked.

“So he went to a country that was on the green list, he then got pinged, he’s self-isolating and will be doing testing, so that’s encouraging.

“He’s taking part in a pilot where people can have slightly different circumstances to otherwise. 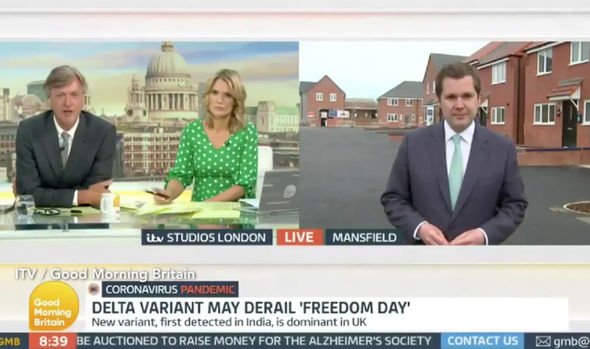 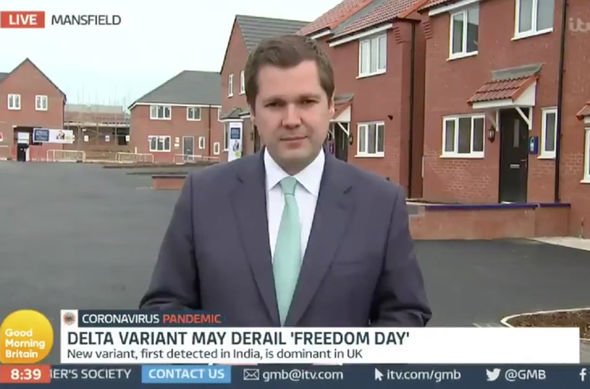 “But I’m sure he’s taking all of the necessary precautions, he’s not been coming into the office.”

“This strikes a lot of people as a very convenient pilot scheme which we can’t all take part in,” Madeley hit back.

Speaking of the latest reports “freedom day” on June 21 could be delayed, Jenrick went on to comment: “Well we designed the road map so there is notice.

“Of course people would always like more notice but we have designed it so a decision is made on the 14 June with seven days notice to the 21st.

“I appreciate that with some businesses, the social distancing rules make a really big impact.

“So if you are able to have more people inside your cafe or bar or you’re able to ask people or encourage them to come back to the work place, you’d like as much notice as you can.

“But I think under the circumstances, it’s right for us to use the next 10 days to really analyse that data as much as we can and to keep expediting the vaccine roll out because the more people we can get jabs into their arms the better placed we will be come the 21 June.”

He continued: “As I say, the data at the moment suggests we are able to proceed with the road map but I think with an increased degree of caution as we’re seeing these new variants and we’re seeing what is going on in the rest of the world.”

Viewers commented on Twitter with one writing: “But it was fine a week ago with all the football supports going then wow all of a sudden it’s a no go area. Bloody joke.”

Another added: “If government were more worried about peoples life’s than lining their pockets they wouldve put india on red list right at the start . Their failure to do so is why covid cases have rocketed . More failure by torys.”

Good Morning Britain airs weekdays on ITV at 6am.