Forty-year-old spoiler alert! The following post discusses the ending of “Raiders of the Lost Ark.” Be warned if you haven’t seen it yet and/or your mom’s still got you covering your eyes during that part of the movie.

Indiana Jones decks plenty of Nazis during “Raiders of the Lost Ark,” though he doesn’t pack quite the punch as the wrath of God.

The legendary 1981 Steven Spielberg action-adventure (which celebrates its 40th anniversary today) follows Harrison Ford’s archaeologist hero through many a sticky situation, although at the end, in the PG-rated movie’s most notorious scene, it’s the villains who get a gruesome comeuppance of biblical proportions.

In the 1936-set “Raiders,” Indy and old flame Marion Ravenwood (Karen Allen) venture from Nepal to Cairo in a race to find the Ark of the Covenant, which is said hold the original Ten Commandments, before the Nazis.

‘Raiders of the Lost Ark’ at 40: All of Steven Spielberg’s movies, definitively ranked 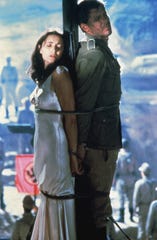 Indy finds the Ark first with his old friend Sallah (John Rhys Davies), though Indy’s arch rival, French archaeologist Rene Belloq (Paul Freeman), and his Nazi goons take it from him. The good guys steal the Ark back but on a steam ship to London, a German U-boat finds them, and the Ark as well as Marion are captured. Before bringing the Ark to Adolf Hitler, Belloq wants to test its power on a remote island in the Aegean Sea, Indy (dressed as a Nazi soldier) threatens with a bazooka to get Marion back, but Belloq calls his bluff and the Germans take him prisoner, too.

Indy and Marion are tied to a large stake to watch the ritual of the Ark’s opening. The lid is lifted and Belloq is disappointed to find just sand in there. Soon after, though, mysterious apparitions come flying out of the Ark and Indy knows what to do. “Shut your eyes, Marion,” he says. “Don’t look at it no matter what happens.”

The bad guys look, first seeing an angelic spirit before her gorgeous face turns monstrous, leading to lightning shooting through Nazi soldiers. The head of Nazi colonel Herman Dietrich (Wolf Kahler) shrinks as he dies hideously, freaky henchman Toht (Ronald Lacey) screams when his face melts down to the skull and Belloq’s head blows up spectacularly. (Indy and Marion thankfully live through the ordeal.) 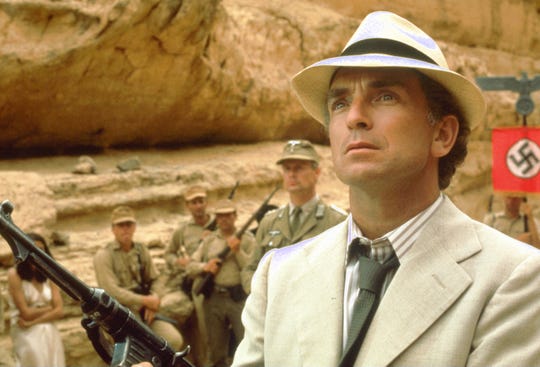 French archaeologist Rene Belloq heads up a Nazi contingent to find the Ark in "Raiders of the Lost Ark." (Photo: LUCASFILM)

Looking back, it was “a very clever touch to make the three heads explode in completely different ways,” Freeman tells USA TODAY. Forty years later, he finds the scene as effective as ever: “You actually don’t question it. You still think, ‘Yeah, sure, spirits come out like that and shoot through guns and shoot through camera lenses. Why not?’ ”

Freeman recalls it being a “bizarre” scene to film because it was “the very early days of the special-effects thing that became green screen and is now done everywhere.” He and his fellow doomed actors had to imagine this destructive presence attacking them while taking directions from Spielberg. “Steven was just yelling at us: ‘Look this way! Look up! look down! It’s horrible! It’s coming at you! It’s moved away! It’s coming over to the left! Keep looking!’ We were just reacting like that instantly, with no idea what we were looking at.”

But Freeman enjoyed that “it wasn’t just horror immediately” forhis antagonist Belloq: When he first witnesses the heavenly figure, he’s ecstatic. “It was something that I’ve always wanted to see and now I’m going to see it and, oh my God, it’s going to eat me.”

Dietrich (Wolf Kahler, far left), Belloq (Paul Freeman) and Toht (Ronald Lacey) peer inside the opened Ark of the Covenant before bad things happen to their faces in "Raiders of the Lost Ark." (Photo: LUCASFILM)

People’s reactions to the scene now are “twofold,” he adds. “They usually say, ‘How did they do that with your head?’ As if, how surprising I’ve still got a head. Or they say, ‘What was inside the ark?’ Well, a bit of sand because we had to pick it up. But that’s all. The magic was added later.”

The carnage all came courtesy of visual-effects company Industrial Light & Magic, and Toht’s face melt was a particular favorite of Spielberg’s. “That was one of the most amazing things I’d ever seen,” the director said in a making-of documentary included in the various “Raiders” home-video releases over the years (including the new 4K Blu-ray Indiana Jones collection). “It’s pretty gory, pretty gross, but I love that effect.”

While her co-stars were acting like they were dying, Allen was shielding her eyes when filming her part (much like a whole generation of young moviegoers with concerned parents) and listening to Spielberg yelling a lot. “It was my first time doing something like that in a film and I thought it was pretty wacky,” Allen recalls. “I was used to having whatever you were responding to right in front of you. But that was a pretty amazing few days when we were shooting those sequences.”

When seeing the finished film, Allen most enjoyed “this beautiful woman flying around the room who then turns into this terrifying creature,” she recalls. “I was completely bowled over. I really didn’t have in my imagination the film that Steven saw in his head. And that’s his genius. It has a life of its own in his head.”