Martin, 49, is joining Susanna Reid, 50, this week on Good Morning Britain for a guest stint as host of the show as he switches roles from being the Money Saving Expert. The presenter sat in the seat previously held by Piers Morgan, 56, who sensationally quit the ITV show earlier this year. However, those at home and his co-host were distracted by what Martin was wearing for his debut.

The programme began with Susanna introducing her co-star to the hosting role, allowing him to open the top of the show.

“It’s just gone half-past six, welcome to the programme. I’m here,” Martin said before saying he was feeling “really good” to be presenting.

“Didn’t you recently have some surgery? You’ve been tweeting about you might have a lisp, you might be sporting a goatee, you didn’t think you could speak properly, you weren’t sure if you would be able to get through a whole programme,” his co-host asked.

“The timing of this hasn’t been the best for me. I had quite substantial dental surgery planned just after my show finished, which was a couple of weeks ago,” the Money Saving Expert added.

“My mouth is not fully healed so if you hear the odd little ‘ssssshhhh’ going on then let’s hope there are no stories in Worcestershire this week as that’s a particularly difficult one to say!” 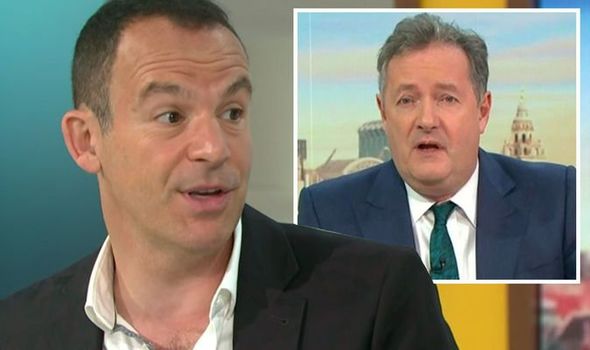 Susanna said: “I think you’re much more worried about it than the problem… it doesn’t sound that serious, you sound absolutely fine.

“Does it prevent you from wearing a tie?” she asked as she commented on her co-star’s appearance as he was wearing an open collar shirt.

Martin replied: “Wow, two minutes in and she’s already started! Look, the tie thing is interesting because the bosses said, ‘Are you going to wear a tie? It’s part of our format to wear a tie.’

“And I’m not disrespectful of the programme’s structure, but in what I do, because I talk about money as the day job, I’ve always had a deliberate thing, I won’t wear a tie because it appears corporate and when you’re talking money.

I won’t wear a tie

“I want people to understand that I’m not on the corporate side. I’m on the other side,” he explained but those watching at home shared their thoughts on the matter.

One wrote: “Wear a tie, this is not his “day job” and I do understand the reasoning on that one but this is a serious news programme not a Sunday afternoon in the pub #gmb,”

Another posted: “There should also be a ‘who cares’ option! I can’t believe a top morning news programme is opening up with this!”

Whilst a third commented: “Either a tie – or fasten another button Martin – I’m getting distracted by the lovely bit of chest hair.”

A fourth shared: “Yes, of course, it’s all about being relaxed in your environment, if Martin doesn’t want to wear a tie, that’s ok.

“It doesn’t stop him doing his job on GMB, It’s so great to see him presenting with the lovely Susanna this Monday morning,” they continued.

It was announced a couple of weeks ago Martin would be stepping into Piers’ shoes after a number of his colleagues had already held the role.

Speaking of replacing the broadcaster, the Money Saving Expert said: “For 15 years I loved answering questions on GMB.”

“Now I’m stoked to get a chance to ask them, as a guest presenter; both on key consumer issues eg scams, plus I’m up for holding power to account on all issues,” he continued.

A spokesperson for the show added: “He’s the most trusted man in Britain and we can’t wait to have him at the GMB desk.

“Martin Lewis joins Susanna Reid from Monday 28 June until Wednesday 30 June, 2021,” they continued as they revealed the dates he would be replacing Piers.

It’s not yet known if this will be a one time stint or if Martin will be asked back to host the show.