LOVE Island fans are having a field day with hilarious memes of Matt Hancock 'on the show' after his shock affair.

The health secretary's infidelity was exclusively revealed by The Sun yesterday and viewers saw this as the perfect time to make comparisons with the hit ITV 2 reality show. 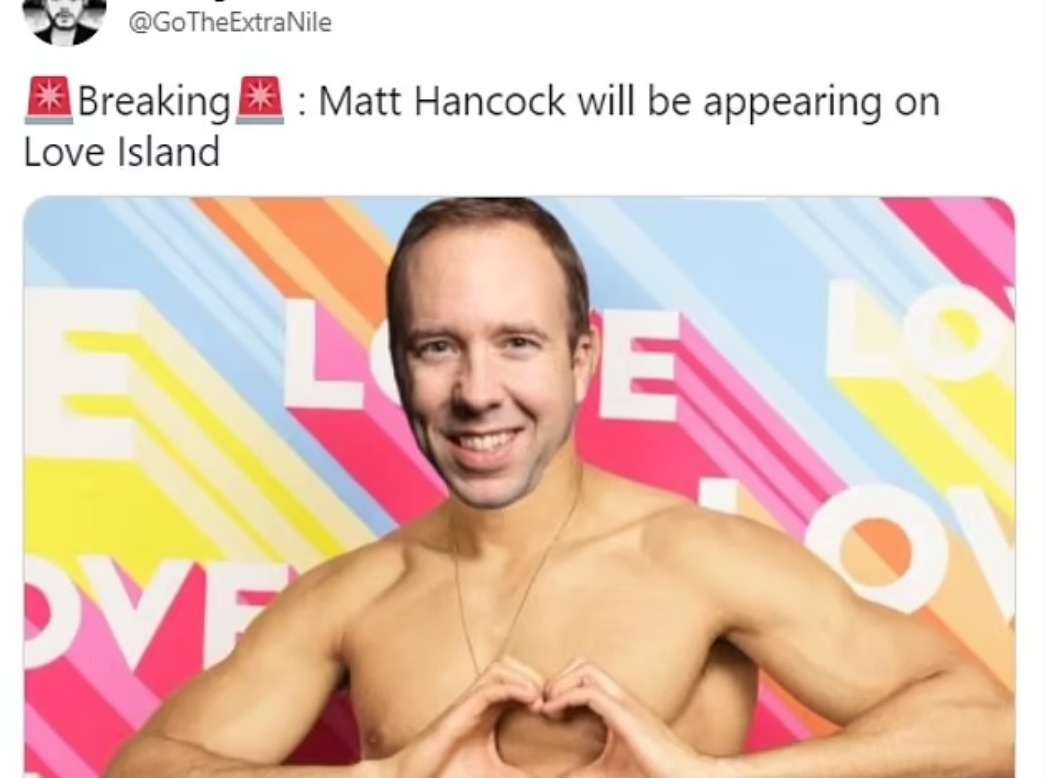 A leaked CCTV image and footage showed Hancock engaging in a passionate smooch with his closest aide and millionaire lobbyist Gina Coladangelo.

The video also caught Matt with his hand on the bottom of his lover, who was hired as a taxpayer-funded advisor in March last year.

Social media was rife with memes and one showed Hancock's head placed on the body of a former Love Islander in a promo shot for the show.

The tweet read: "Breaking: Matt Hancock will be appearing on Love Island." 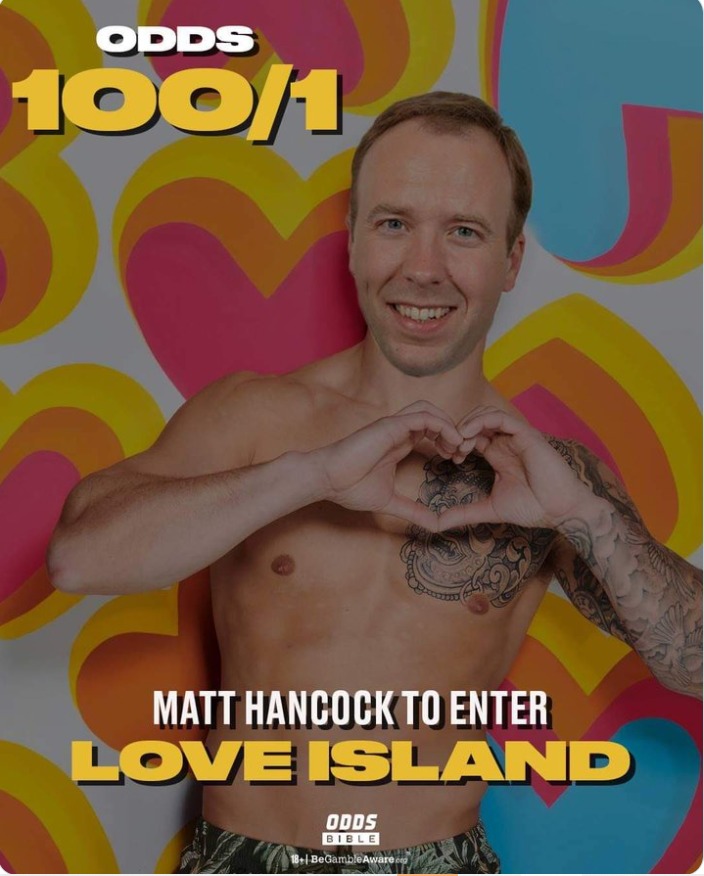 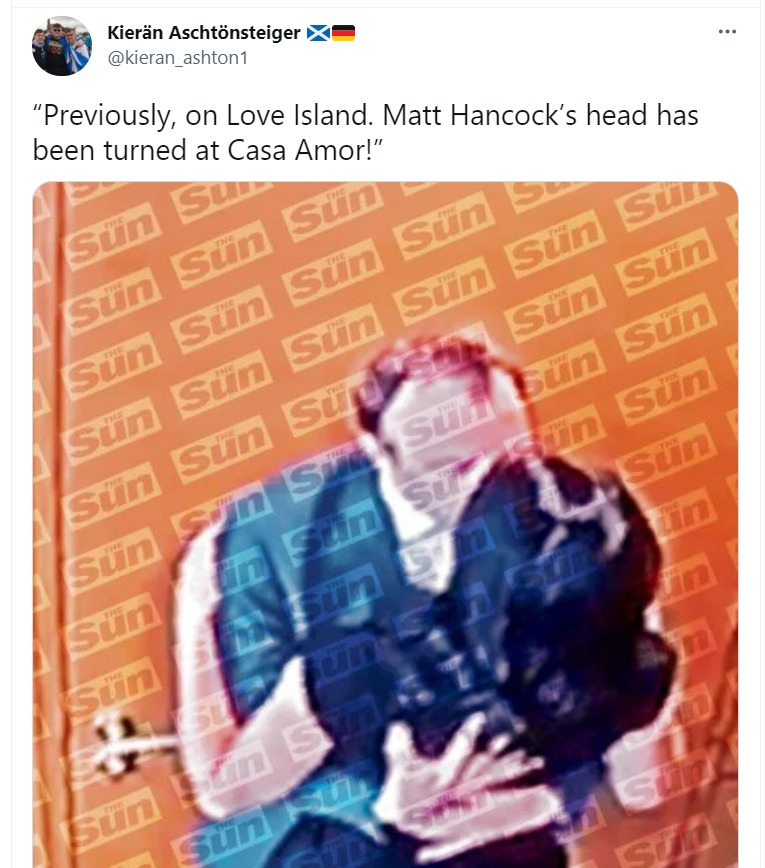 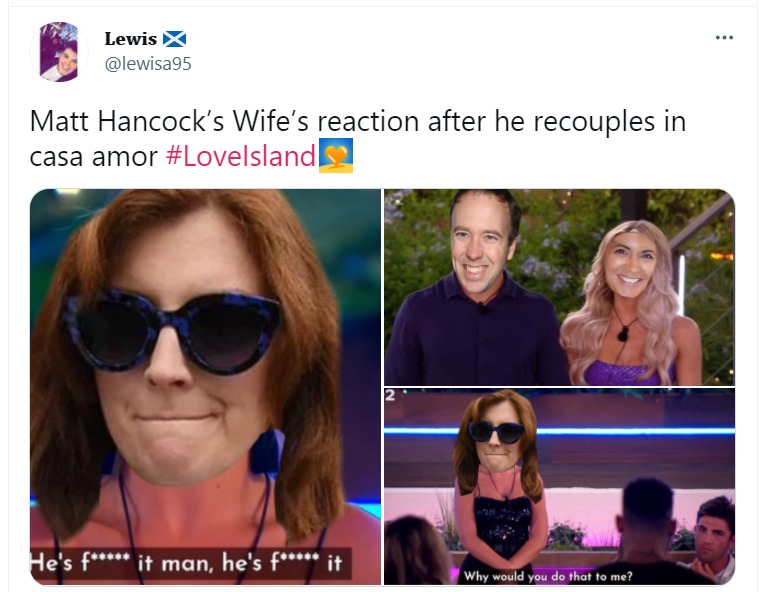 Odds Bible tweeted that the member of the Conservative Party is 100/1 to appear in the Love Island villa and his head was once again photoshopped on to the body of a former island.

The tweet read: "'I’VE GOT A TEXT!' Incredible scenes as Matt Hancock is now priced at 100/1 to appear on @LoveIsland this summer."

The banter between fans on social media continued as another write in reference to the popular show: "Previously, on Love Island. Matt Hancock’s head has been turned at Casa Amor!"

While another meme illustrated how Matt Hancock's wife Martha would react if he re-coupled at the dreaded and also beloved Casa Amor.

The first pic showed a photo of his wife with sunglasses on while saying: "He's f***** it man, he's f***** it", while standing with his aide Gina, before the final picture read: "Why would you do that to me?"

Whistleblowers revealed the Health Secretary had been ­spotted cheating on his wife of 15 years with married Ms ­Coladangelo.

He was seen kissing her at the Department of Health’s London HQ during office hours last month as the mutant strain began spreading.

Mr Hancock apologised for his actions, saying: "I accept that I breached the social distancing guidance in these circumstances.

"I have let people down and am very sorry. I remain focused on working to get the country out of this pandemic, and would be grateful for privacy for my family on this personal matter."