LOUISE Thompson has suffered a second Remembrance Instagram fail in a matter of days after posting sexy snaps on Armistice Day.

The former Made In Chelsea star, 30,came under fire on Remembrance Sunday for sharing a "disrespectful" tribute to fallen war heroes after attaching a poignant poem to a picture of her on a luxury holiday in the Maldives. 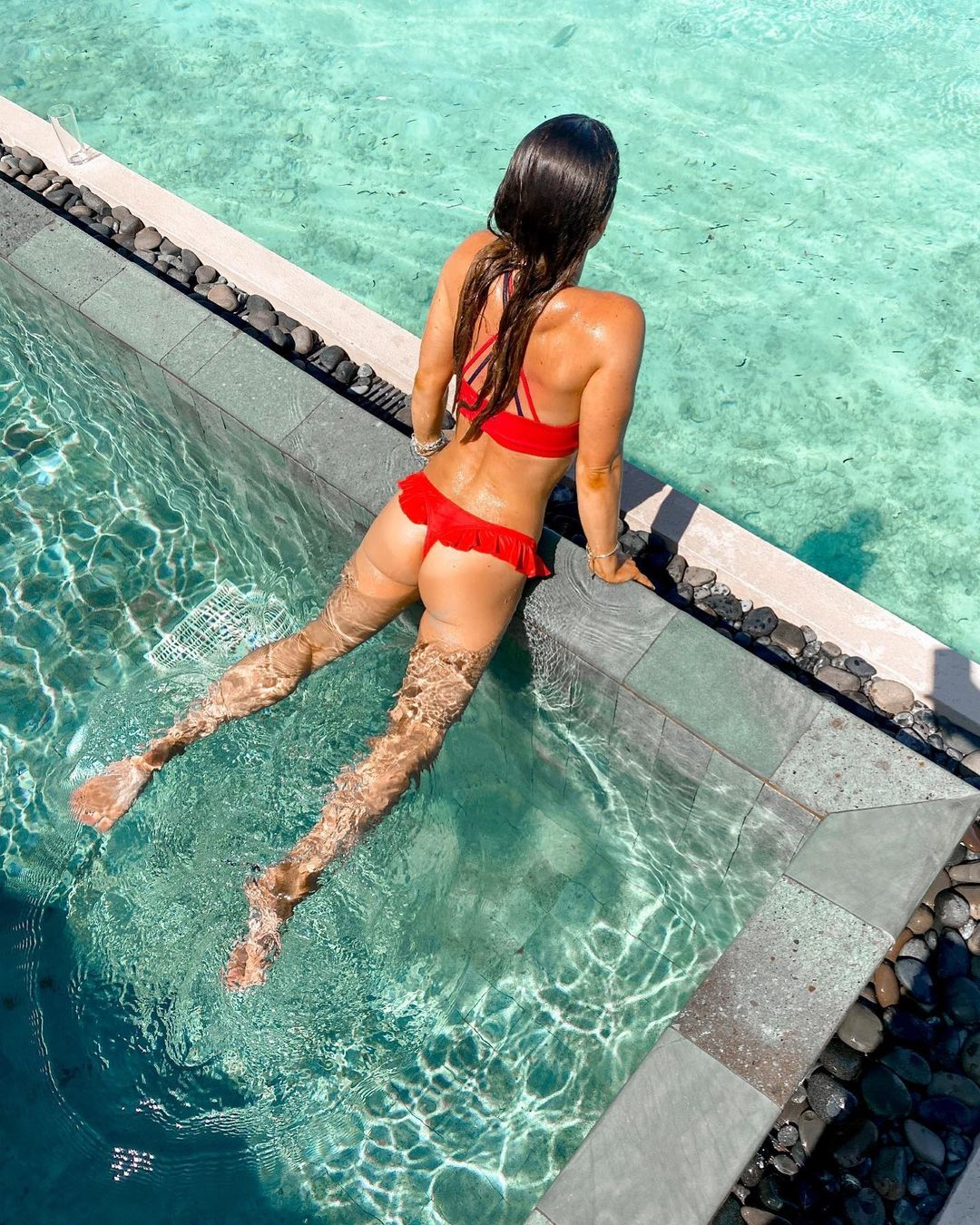 And she has now been criticised again, this time for stripping down to a bikini and relaxing in a pool, as well as taking part in a couple's workout with fiancé Ryan Libbey.

One annoyed follower commented: "Really touching tribute, well done for being so in touch with what’s happening today 😢."

A second said: "My great grandad died in ww1 in Gallipoli 1915. He was in the Royal Army Medical Corps. Let’s remember the true influencers and hero’s."

A third fumed: "Yes we can see you have a great figure…..let’s face it this is what the post is about!!! Why don’t you post showing your respects to the fallen war heroes as without them you and your privileged family would probably not be here today."

While another posted: "A**e out for remembrance day." 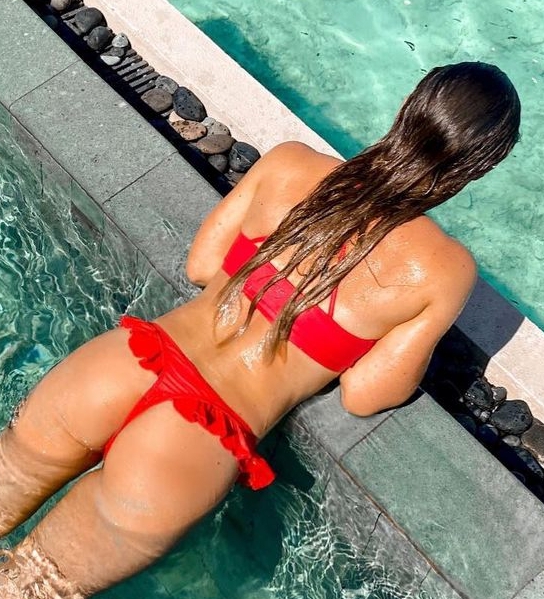 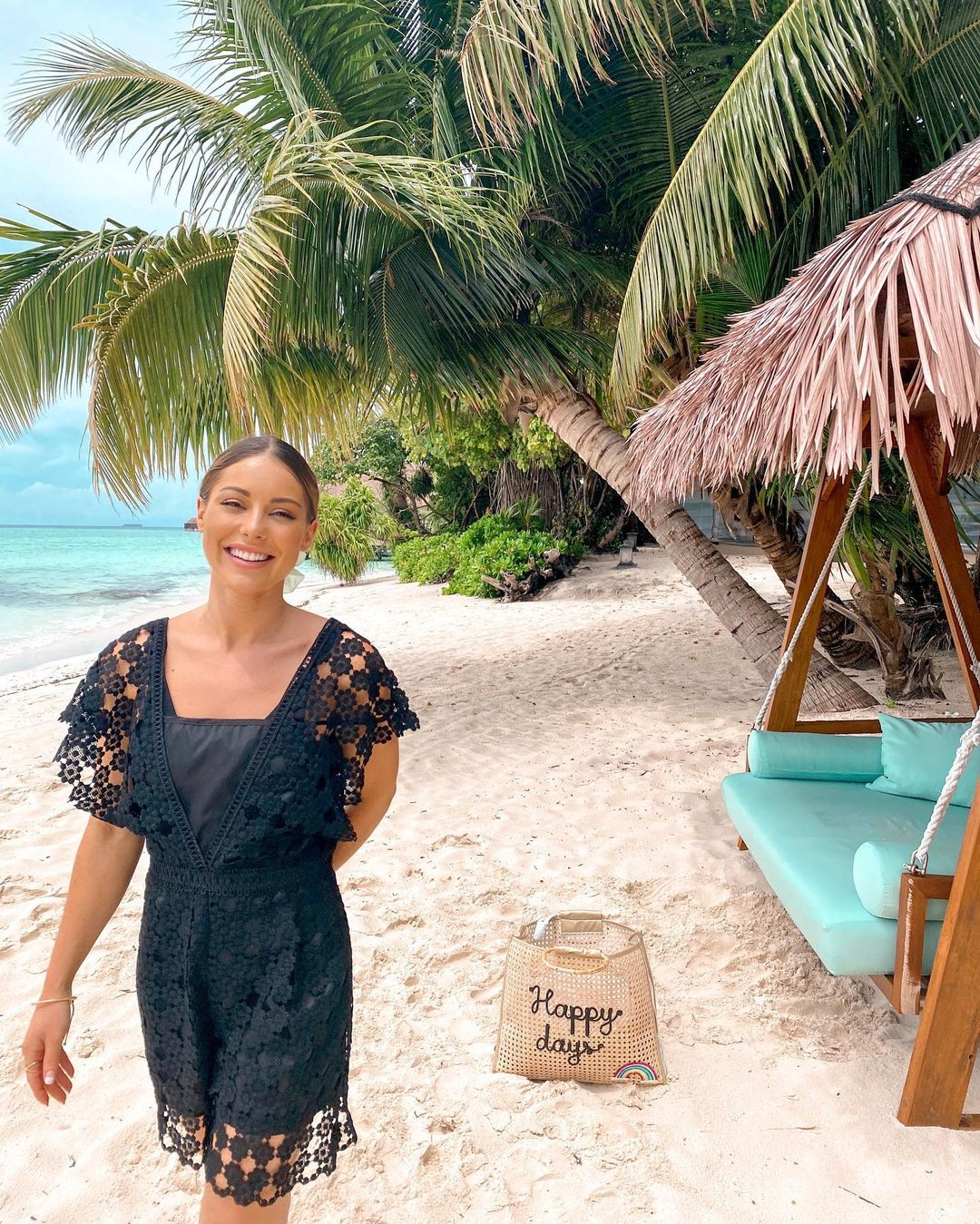 On Sunday she uploaded 'For The Fallen', a poem written in 1914 by Lauren Binyon that was chosen to commemorate the 100th anniversary of World War I on a series of Royal Mail stamps.

She posted parts of the famous poem with photos of her by the beach in a dark blue mini dress, striped heel sandals and a bag that read "happy days".

It did not take long for people to start saying it was in "bad taste" and she deleted the poem and replaced it with a blue butterfly emoji.

The poem's excerpt read: "They shall grow not old, as we that are left grow old. Age shall not weary them, nor the years condemn." 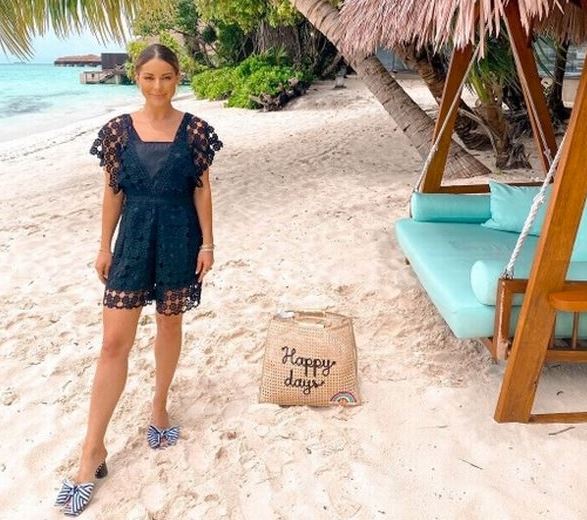 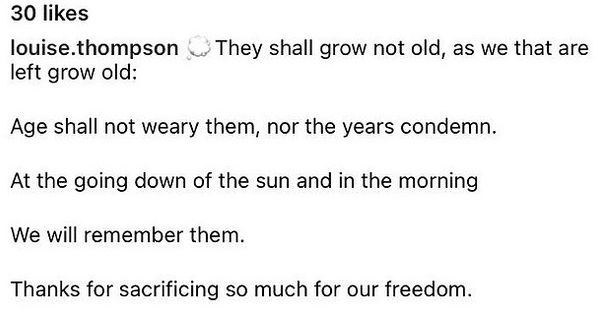 "At the going down of the sun and in the morning. We will remember them."

Louise added: "Thanks for sacrificing so much for our freedom."

Her followers were not happy at her commemorative post, labelling it "completely inappropriate and disrespectful".

Another Instagram user wrote: "I'm a fan but not right sentiment."

And a third added: "If she felt it was appropriate why did she delete it?."

But some of her 1.2mil followers defended Louise.

One fan said: "I think the caption and sentiment behind it is she has the freedom to travel and live the life she wants too because of the sacrifices made by the war heroes. If she wants to put a pic on of her holiday then why not? It's remembrance Sunday, people can remember, reflect etc how ever they like or indeed choose not to!"

Louise is on the loved-up getaway with Ryan after recently hinting they'd split up.

Tweets from Louise last month had people wondering whether her engagement to Ryan was off. 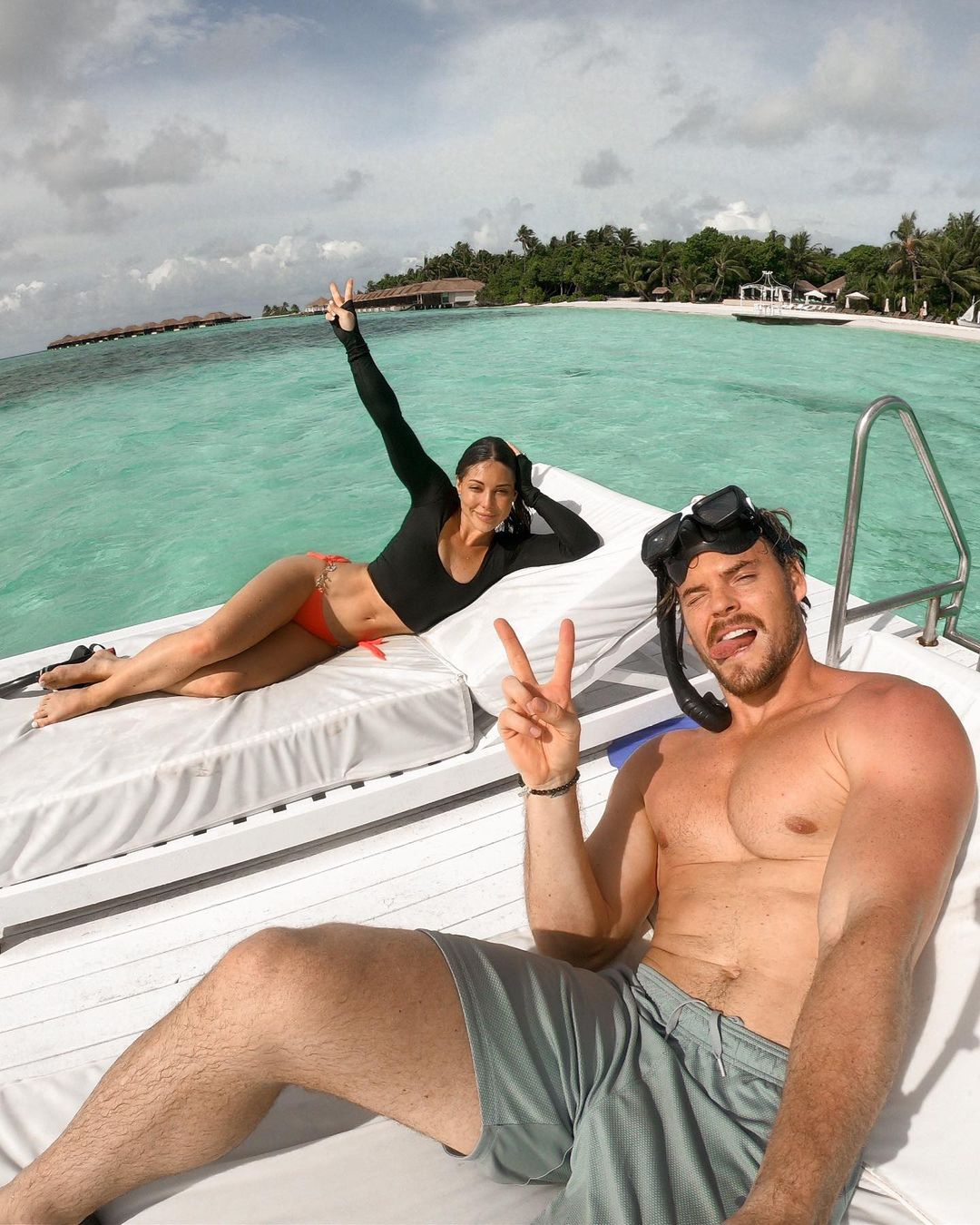 On September 3, Louise Tweeted: "Cheaters always want you to be loyal while they're being unfaithful."

A week later she then posted: "I'm proud of my heart. It's been played, stabbed, cheated, burned and broken… somehow still works."

She had also penned this: "Trust takes years to build, seconds to break, and forever to repair." 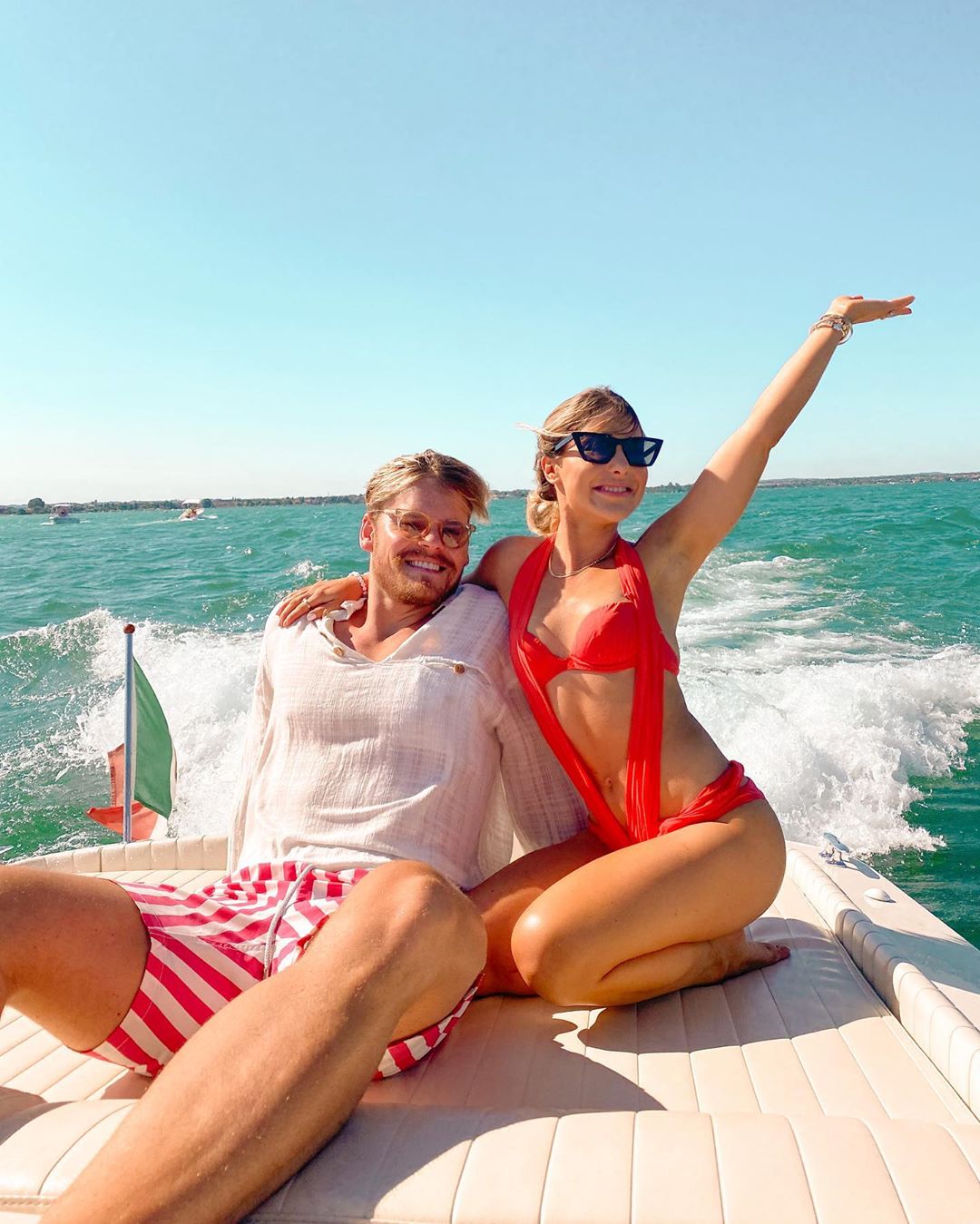 A source close to her told The Sun they're still together though, and apparently the Tweets were aimed at "someone else".

They may have been meant for her brother Sam Thompson's ex Zara McDermott, who cheated on her Made In Chelsea beau.

Sam, 28 dumping Love Island star Zara in September after she cheated on him with music boss Brahim Fouradi.

Ryan and Louise were originally due to marry in December 2019 but cancelled the wedding to take more time to work on their relationship.

Louise found fame through Made In Chelsea, though she now focuses on her fitness career, while Ryan is also working in the fitness industry.