Susanna Reid chokes up as she speaks to Thames hero's parents

Towards the end of the show, Susanna Reid and Adil Ray OBE, spoke to Jimi’s parents about his tragic death. The 20 year old had died after jumping into the Thames to save a woman who had fallen from London Bridge in the early hours of Saturday morning.

“I honestly,” Susanna began. “The tragedy that you’re family has suffered is unimaginable.

“But what you’re saying, of course, was Jimi was motivated and inspired to help other people and that’s what happened on Friday night.”

She paused and added before her voice broke: “My heart is absolutely…”

Susanna continued: “It’s broken for you as parents.” 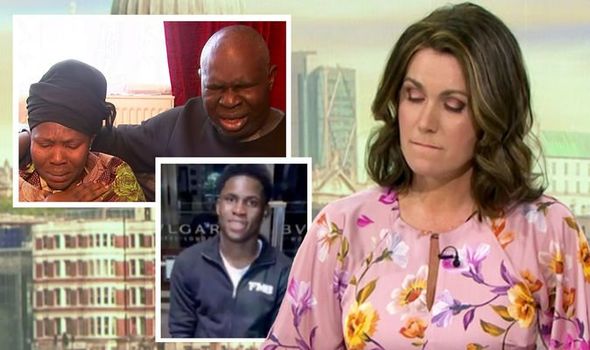 Susanna and Adil were joined by Jimi’s best friend, Bernard Kosia in the studio to talk about what happened the night Jimi died.

He explained: “Me and Jimi, we were immediately trying to find out where she [the woman who had fallen into the Thames] was.

“But because it was near midnight, you couldn’t see anything, it was pitch black by the river.

“As I did that, I took off my top and wrapped it around my jumper, I was trying to hear where the noises were coming from, maybe I could put my jumper down the side and pull her and lift her up, but she wasn’t there. Jimi was also hearing her from the other side, so we both ran to the other side, ran down the stairs, the voice of the woman – it became clearer, we could hear her,” Bernard continued.

“Jimi was adamant, for some reason, he didn’t care, he didn’t think twice.”

Susanna added: “He didn’t care what would happen to himself? He only cared about trying to rescue that woman.”