Gwen Stefani left fans doing a double talk during her latest talk show interview, with some claiming they wouldn’t have known it was her if it wasn’t for the title.

The Sweet Escape singer, 52 (yes 52), was the latest guest to appear on Late Night With Seth Meyers, where she discussed her current role as a coach on The Voice US.

Stefani’s eternally ageless looks have been a big talking point over the years, but the Rich Girl hitmaker has never spoken publicly about having any cosmetic procedures.

‘I’m a lifelong fan of Gwen’s and I didn’t recognize her. I’m so confused,’ one person wrote.

‘Could have given me 100 guesses who that was from the thumbnail alone and I’d have never guessed Gwen Stefani…,’ another added. 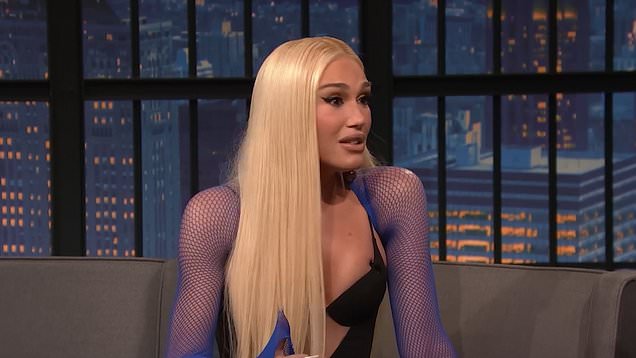 In her 2016 Carpool Karaoke segment with presenter James Corden, Stefani said the secret behind her youthful looks was down to love.

‘What happened was, my life blew up. After that, I kind of started falling in love,” she said.

‘Then I wrote a whole record about that. That’s what the facelift is, I think!’

At the time, the performer was referring to her country star husband Blake Shelton.

Blake and Gwen got engaged in October 2020, five years after they started dating after meeting while they were both coaches on The Voice.

The pair were both newly divorced at the time, with Gwen filing for divorce from Gavin Rossdale after 13 years of marriage.

Stefani evolved into a style icon after her early days as the frontwoman of 90s pop band No Doubt, before she launched her solo career in 2004 and later dabbled in fashion.

On March 17 this year, No Doubt’s self-titled album turned 30 and prior to the anniversary Stefani didn’t seem to rule out a special reunion.

‘It is a really big deal, and I do [think about it]. I’m reflecting so much on all the music,’ she told Zane Lowe on Apple Music’s Beats 1.

‘When you’re writing new music, [you] reflect on everything that you’ve done. For sure, surreal to think that that happened so long ago.

‘I have no idea what the future holds with that. You know what I mean? It’s impossible.’

Metro.co.uk has reached out to Gwen Stefani for comment.