Coronation Street resident Ray Crosby (played by Mark Frost) attempted to rape Faye Windass (Ellie Leach) last month, which led the teen to attack Adam Barlow (Sam Robertson) in a case of mistaken identity. However, as things continue to develop, Abi (Sally Carman) will be left in a potentially fatal situation when she collapses after trying to catch Ray out. However, with Debbie Webster (Sue Devaney) remaining embroiled in Ray’s plans, could this see her have to leave the mechanic for dead when she worries for her own safety after being dealt a new threat?

The extent of Ray’s sinister ways has gradually begun to unfold in recent weeks.

With having taken advantage of employee Faye, it’s his development plans which will suffer next week.

Next week, the extent of his questionable financial decisions will become clear when a former nemesis makes an unwelcome return.

Mick Chaney (Neil Bell) will reappear next week and chuck Ray out of the back of his van after it becomes clear he owes him a lump of cash. 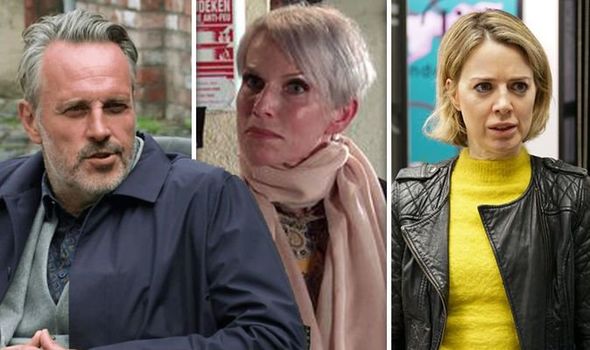 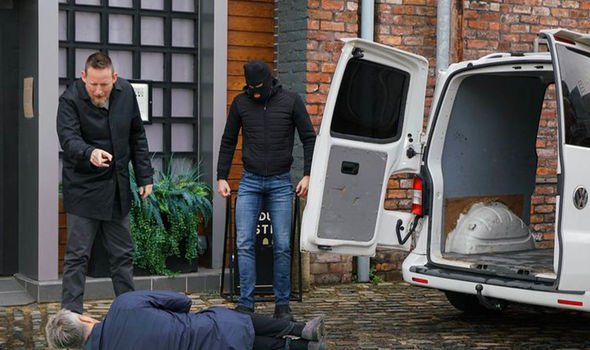 Ray is warned he has 24 hours to find the money and pay up, or else there will be consequences.

Elsewhere, as the development plans continue, Debbie is set to be dealt a setback after reminding Ray they will be completing the sales of No 4 and No 6.

While Ray assures her he’s onto it, a meeting with the planning committee’s Chairperson, Susan, it becomes clear the funds will have to be used elsewhere.

She tells him she wants £20k or she will reveal how he bribed her. 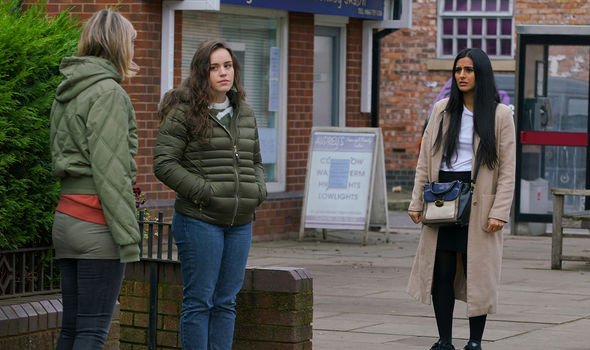 Corrie: Ray Crosby wonders who’s been in The Bistro

Ray promises to deliver the funds but when Debbie discovers he’s used the money earmarked for the properties to pay Mick and Susan, she’s left furious.

The businessman calls the bank for extra funds but it seems he will be dealt with new trouble elsewhere.

Abi, Alya (Sair Khan) and Faye realise Ray has been released from custody after his attack on Faye after they spy him leaving the Bistro.

Adamant on getting the sex pest sent down, Alya reports Ray to the police for previously luring her to a hotel bedroom with the intention of having sex.

Trying to remain one step ahead, scheming Abi calls in at Ray’s hotel to try and dig some dirt on the sleazy developer.

But when Ray arrives with Susan in tow, Abi dives behind the bar, which gives her a breakthrough idea.

When the pair openly start discussing their various crimes, Abi takes the initiative to record the conversation on her phone.

Later on, Abi uses this against Ray when they meet up at the Rovers’ and she offers him a new ultimatum.

Either he confesses to the assault on Faye or she tells everyone his bribes fo the planning committee – to which he chooses the former.

However, when Abi suddenly feels dizzy and collapses as Ray grabs her phone and tries to delete the footage.

A furious Debbie barges into the Bistro to confront Ray about the incriminating video Abi sent her but is horrified to spy Abi sprawled on the floor.

Debbie quickly acts and goes to call an abundance but before she can do so, Ray swipes the phone from her hand and warns her she will be helping him out this mess.

But will Debbie really let Abi die, or will she finally stand up to the evil businessman?

Coronation Street airs Mondays,  Wednesdays and Fridays at 7:30pm and 8:30pm on ITV.