In the latest episode of BBC drama Line of Duty, Ryan Pilkington (played by Gregory Piper) was found dead by Superintendent Patricia Carmichael (Anna Maxwell Martin), Superintendent Ted Hastings (Adrian Dunbar) and DI Steve Arnott (Martin Compston). It is not 100 percent as to whether DI Kate Fleming (Vicky McClure) or DCI Joanne Davidson (Kelly MacDonald) shot him, but either way, they went on the run together. No one knew where they were apart from Steve, although, Carmichael was quick to track them down. The only other person that could have known about their whereabouts was DS Chloe Bishop (Shalom Brune-Franklin) who called the control room to locate Kate’s car, according to a number of eagle-eyed fans.

Since she made a return, fans have been convinced Carmichael is H, but now they have come up with the theory Chloe could be in on it as well.

Just minutes into tonight’s instalment, Carmichael instructed Chloe to put out an arrest warrant for both Kate and Joanne.

Back at the station, Chloe interrupted Steve and Superintendent Hastings as they were having a chat.

As the Gaffer quizzed Chloe on Kate’s whereabouts, she broke the news to him that DCS Carmichael had ordered her to update the Operation Lighthouse evidence.

As he gave her the nod, Chloe removed a picture of Chief Constable of Central Police, Philip Osborne (Owen Teale) from their board of suspects. 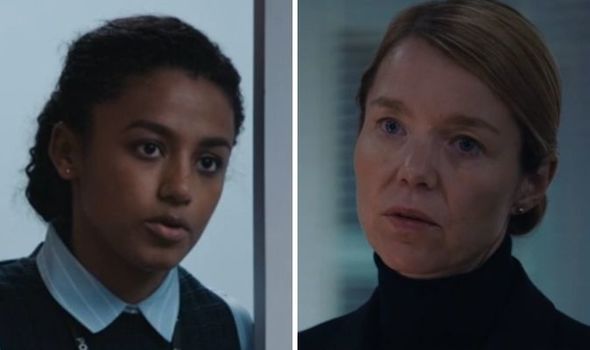 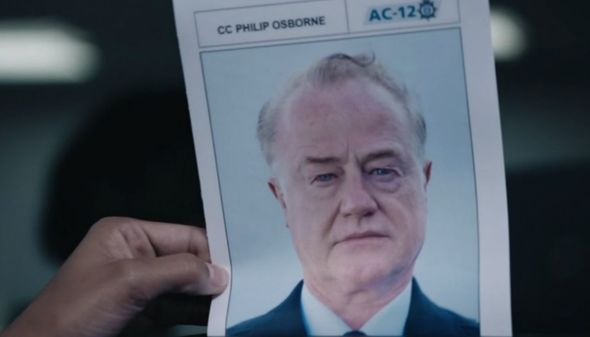 Osborne’s first appearance showed him to be a suspicious character – he told his team to lie in court after the unlawful shooting of suspect Karim Ali.

He’s since emerged in later episodes in a more senior role, refusing to answer Gail Vella’s (Andi Osho) questions about the police force before she was murdered.

Steve and the Gaffer gave each other a look as Chloe apologised and left the room.

Chloe then went on to shred the image of Osborne and as she turned around, Carmichael was staring straight at her through the glass window.

Chloe acknowledged the look with a half-smile, although, this rose suspicions with viewers.

Why would Carmichael instruct Chloe to remove Osborne’s image if they both weren’t in on it? 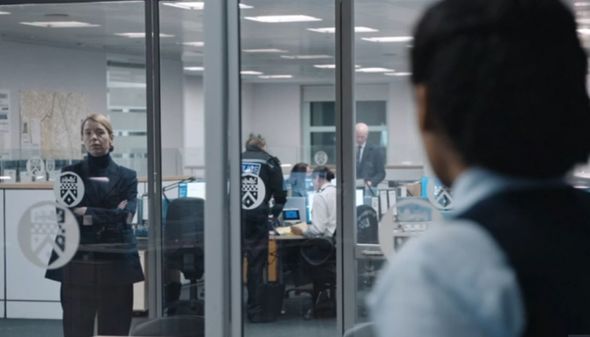 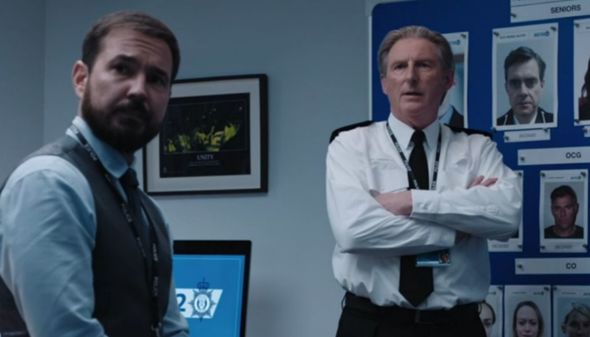 Another said: “Has Chloe been working for Carmichael all this time!!”

A third predicted: “Chloe is giving me jitters not sure about her.”

A fourth said: “What was that look between Patricia and Chloe, just professional, or we’re both bent coppers look?”

“The only one who could’ve spilled would be Chloe,” a fifth explained.

Another summarised: “Still not quite convinced about Chloe, appears too competent. Is she an ac3 plant inside AC-12 by Carmichael?”

A seventh fan added: “I’m not prepared for the finale, I don’t see Jo surviving it, Ted’s going to be saying hello to retirement and Steve’s going to be suspended for not having a medical review.

“And then you’ve got Kate, Chloe and Carmichael two of whom I think are bent.”

To add to their theory, shortly after, Carmichael received a phone call which could have been to do with Kate and Joanne’s whereabouts.

Armed police then swarmed in on Kate and Joanne as they pursued the duo on a car chase.

In the end, they were both caught out, although Kate knew something wasn’t right.

Later on, Carmichael told Superintendent Hastings she was able to catch Kate and Joanne as she’d had all AC-12’s cars tracked.

However, was this the case or did Chloe tip her off?

Line of Duty airs on Sunday at 9pm on BBC One.