Dan Walker and Louise Minchin were informing BBC Breakfast viewers of the day’s headlines when Dan revealed an interesting fact about NASA’s latest space launch. The presenter explained actor Tom Cruise could one day use the service for one of his films but Dan’s accompanying joke didn’t impress Carol Kirkwood.

Dan introduced: “Four astronauts are going towards the International Space Station at the moment after a successful launch from Cape Canaveral in Florida.”

As BBC Breakfast aired a clip of the launch, Dan continued: “This was the moment the capsule blasted off this morning.

“The SpaceX capsule will act as a taxi service for the coming years.” 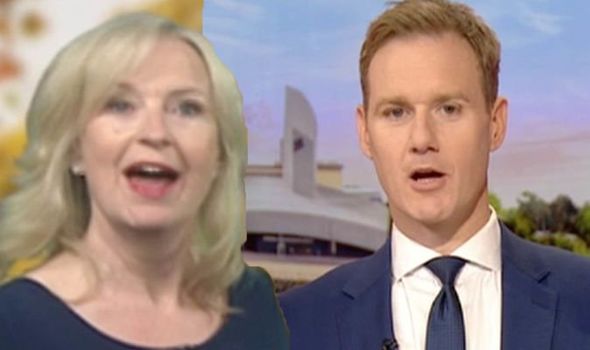 “And one of those who might be using the taxi, we heard earlier from one of our guests, may well be Hollywood’s Tom Cruise,” Dan continued.

“He might be filming some of his latest blockbuster on the space station.”

“That was news I was not expecting to hear this morning,” Louise commented.

“How do you think he’ll get there Louise?” Dan joked. “Cruise control…”

Louise remained silent as Dan turned his attention to Carol: “Anyone? Carol? Come on cruise control.”

“That was shocker Dan,” Carol hit back. “Even by your standards.”