In many ways, Breaking Bad was not a realistic show.

There’s almost no chance that a straitlaced high school chemistry teacher would “break bad” and start selling meth with a former student to make money for his family. And even if Walter White did make that choice, the chances of him becoming a feared drug kingpin are slim to none.

But even though the Emmy-award winning series defied reality, there were certain elements that rang true. The characters on Breaking Bad felt authentic, including the meth addicted prostitute Wendy (Julia Minesci). She even convinced a real customer to proposition her during filming.

Wendy the prostitute played a small role in ‘Breaking Bad’ 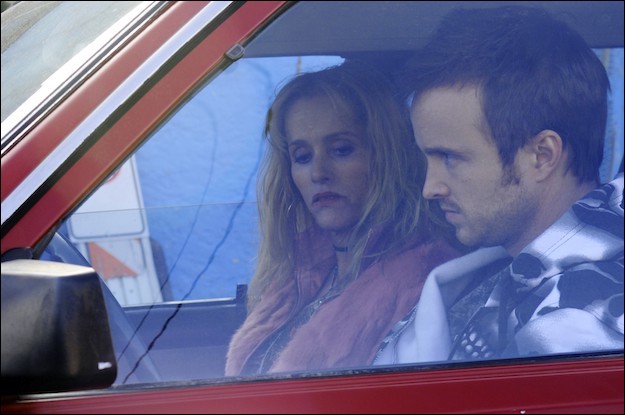 It’s easy to remember Walt, Jesse, Agent Schrader, Mike, Gus Fring, and all the other main cast members on Breaking Bad. But even the supporting players contributed important pieces to the overall vibe of the series.

Every small part from Saul Goodman’s long-suffering secretary Francesca to Jesse Pinkman’s drug-dealing friends Badger and Skinny Pete offered a crucial element that made Breaking Bad one of the most important dramas in television history.

Not much is known about Wendy, the drug-addicted prostitute who lived in an Albuquerque hotel. But she helped advance the narrative that showed the darker side of what Walt and Jesse were doing. The character Wendy helped convey the human element behind the meth they were manufacturing and profiting from.

A real person propositioned Wendy while she was filming the show

Minesci was the right choice for the part. That’s clear from an anecdote that happened during filming, which cemented how convincing Wendy was as a real sex worker.

As Minesci explained during an interview with AMC (via Screen Crush), she was approached by a man in a van who was interested in her services while the crew was filming in Albuquerque. At first she thought the “john” was part of the cast as the Breaking Bad crew used several different actors and vehicles during filming. But she quickly figured out he thought she was a real prostitute and wished to employ her services.

The actor laughed about the incident, saying, “I thought that was quite funny. I could have made an extra twenty dollars.”

There are still elements of Breaking Bad that fans fight over or don’t quite understand. Some viewers are even convinced Walter White lived at the end despite Bryan Cranston insisting that’s not the case. But for the most part, the entire series made sense logistically. Every detail was intentionally included to enhance the storyline or even to provide foreshadowing for what would come next.

Showrunners even employed a science expert on the show to make sure they got the intricate meth-making details correct. Donna Nelson tried to talk Vince Gilligan out of making the legendary meth blue because that’s not exactly accurate. But, there were some small liberties they had to take to make the show more interesting.

From the prostitutes to the meth, it’s clear Breaking Bad was a believable show. Especially for the citizens of Albuquerque.