This festival’s 22nd edition covers themes of crisis, both personal and planetary, with short works from the likes of Gil Alkabetz and Frédéric Back. 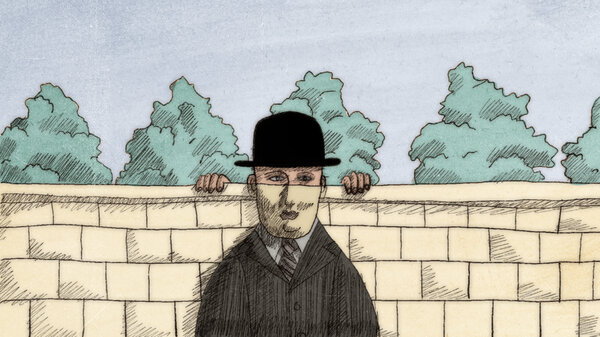 In 2016, the celebrated Japanese animator Hayao Miyazaki was shown footage of animation generated by artificial intelligence. In it, a humanoid form slithers back and forth, its movements startlingly alien. Far from being impressed, Miyazaki was deeply disturbed. To this most humane of artists, the demonstration was “an insult to life.”

Thankfully, Miyazaki is unlikely to be offended by the examples of short-form animation presented in the 22nd edition of “The Annual Animation Show of Shows.” Curated by the producer Ron Diamond, the chosen films (nine recent, plus one restored classic) feature multiple techniques (none of them assisted by A.I.) and worldwide talent. Themes include crises both personal and planetary, in tones ranging from whimsical to hopeful to vaguely apocalyptic. Unsurprisingly, the pressures of modern life loom large, with more than one short stressing our dependency on the environment and one another.

Two of the sweetest address emotional connections with childlike simplicity. In “Aurora,” the Canadian director Jo Meuris, supported by a lovely musical score and endearing stick-figure drawings, narrates the story of a little girl’s love for a horse. And in the ingeniously evocative “Ties,” the Russian animator Dina Velikovskaya shows how a daughter leaving for college can be the literal thread that unravels the life she has left behind.

While none of the offerings directly references the pandemic, one of my favorites, Geoffrey de Crécy’s “Empty Places,” drifts past on a melancholy, meditative mood and world-without-us images. A turntable playing Beethoven’s “Moonlight Sonata” endlessly repeats; unclaimed luggage circles aimlessly on an airport carousel. The film’s deserted, pastel-hued spaces have a poignancy that’s echoed in “Beseder (Good and Better),” by the Israeli animator Gil Alkabetz, who died earlier this year, and the musician Tova Gertner. Together, they weave gentle song lyrics and artfully distorted figures into surreal vignettes on the stubbornness of pessimism.

In general, the vibe is subdued, with several of the more abstract inclusions — like Jeanne Apergis’s “Zoizoglyphe,” whose sounds and images align to portray crowds of birdlike figures panicked by an outsider — demanding more than one viewing to parse. It’s something of a relief, then, to encounter the clarity and earthy realism of Gísli Darri Halldórsson’s “Yes-People (Ja Folkio),” the collection’s sole comedy. Resounding with the familiar grunts, sighs and orgasmic shrieks of the residents of a thin-walled apartment building as they go about their daily lives, this primary-colored charmer delivers a timely plea for tolerance. Even when your neighbors are embarrassingly lusty.

Bringing up the rear — and claiming one-third of the compilation’s 90-minute running time — is the English version of the Canadian director Frédéric Back’s digitally remastered, 1987 Oscar winner, “The Man Who Planted Trees.” Buoyed by Christopher Plummer’s velvety narration, the movie follows a lone Alpine shepherd as he plants thousands of acorns, his industry finally rewarded by a forest that transforms his desolate surroundings. Based on a 1953 fable by Jean Giono, Back’s beautifully impressionistic drawings make a simple argument for environmental renewal and individual agency. The film’s idealization of a pared-down life might feel dated, but its do-something message is one that never goes out of style.