Amy Koppelman wrote ‘A Mouthful Of Air’ in 2003. 18 years later, it’s hitting theaters and breaking barriers in the discussion about postpartum depression.

Amy Koppelman is using her art of storytelling to help break the stigma that has surrounded postpartum depression for far too long. 1 in 7 women struggle with feelings of depression, some severe, after giving birth, based on a recent study. However, in the ’90s, when Amy’s A Mouthful Of Air takes place, the topic was widely untouched, even in surprising places like the OBGYN office. “I think so much of how women define themselves is based on their maternal instinct and I think that people get confused between these feelings that are hormonal and an illness, and they feel that somehow or another, it defines who they are as women,” Amy explained in an EXCLUSIVE interview with HollywoodLife.com at The Cinema Society and Maven Street Media screening of the film at the Roxy Hotel on Oct. 24.

She continued, “If they had asthma and they went to the park with their child, they would have no problem whipping out an inhaler. They would never think they were a bad mom. There’d be no shame in that — they were just having a hard time breathing. But, I think the stigma surrounding postpartum depression brings into question who we are as women.” 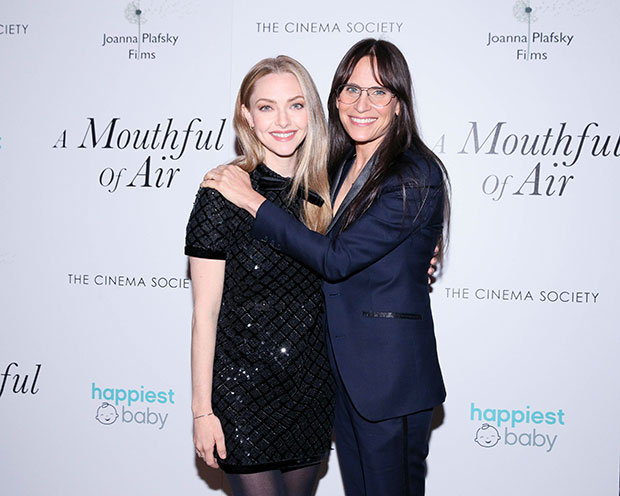 Amy put pen to paper to draft the story about a young new mom struggling with sever postpartum depression after finding herself Googling, “Can a mother hurt her child?” Her book published in 2003, but it has taken several years and numerous rejections to create the movie that hits theaters on Oct. 29th. “We’ve been working on this for so many years. It’s very, very hard to get a movie like this made,” she admitted. “Amanda [Seyfried] stood by me through every rejection. She was the greatest partner, and together, we got to make something that we really hope, in some small way, will help women.”

The author turned filmmaker always had Amanda Seyfried in mind for her protagonist Julie Davis, a young children’s book author and illustrator whose lifelong struggle with depression and anxiety worsens after giving birth. When it seems like she’s on the mend, she becomes pregnant again and chooses to go off her antidepressants, despite doctor recommendations. The story follows the misconceptions surrounding postpartum depression, the lack of resources, and the silent, lonely shame so many women endure.

“If we have these feelings, it doesn’t mean we’re not maternal,” Amy said. “That’s the thing we’re trying to stop people from thinking. Hopefully this movie will let women know they’re not alone.”

A Mouthful Of Air comes out on Friday, Oct. 29th. If you or someone you know is suffering from postpartum depression, call the PSI HelpLine at 1-800-944-4773 or visit postpartum.net.