Artificial rope bridges could help save the world’s rarest primate — the Hainan gibbon, Nomascus hainanus — by helping them cross gaps in their forest habitat.

Experts who suspended ropes some 30 feet above ground across a damaged patch of forest 52 feet wide have filmed the gibbons using the bridge for the first time.

The Hainan gibbon — only found on the island of the same name in the South China Sea — is the most critically endangered primate, with a population of only 30.

Less than two feet tall, the gibbons have thin bodies, with long arms and legs, while adult males and juveniles have a jet black coat. Adult females are golden yellow.

It lives an arboreal — or tree-based — life and experts say that it has never been seen on the ground, meaning that it needs our help to cross gaps in its habitat.

The same approach can be used to link up isolated patches of forests elsewhere in the world and expand the habitats of endangered apes, the team said. 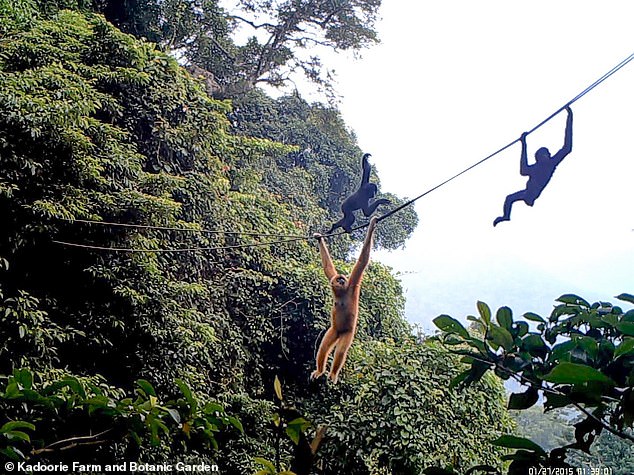 Artificial rope bridges could help save the world’s rarest primate — the Hainan gibbon, Nomascus hainanus — by helping them cross gaps in their forest habitat, pictured

‘The study highlights the use and value of rope bridges to connect gaps in forest canopies,’ said paper author and biologist Bosco Chan of the Kadoorie Farm & Botanic Garden in Hong Kong.

‘Although restoring natural forest should be a priority conservation intervention, artificial canopy bridges may be useful short-term solutions.’

They were tied between sturdy trees to form a crossing over a gap in the forest — caused by a natural landslide — along which the monkeys can swing and run.

‘Gibbons are strictly arboreal and very few wild ones would travel on the ground by choice. The Hainan gibbon has never been observed on the ground.’

‘Artificial canopy bridges for conservation of arboreal wildlife have been applied in South America, Australia, Africa and Asia.’

‘But they are not used for the conservation of gibbons, which are arguably the most threatened group of primates worldwide.’

‘All of the 20 species classified are threatened with extinction by the International Union for Conservation of Nature Red List.’

Dr Chan said that the gibbons were wary of the bridge at first, as they are only used to swinging on branches. In fact, it took nearly six months for them to build up the courage to use it to cross the landslide.

Females and small juveniles preferred it most. Mothers were filmed displaying their acrobatic abilities — as babies hung from their midriff.

Over 15 months, 208 photographs and 53 videos were recorded by the team of the gibbons using the artificial bridge.

Nine of the ten group members were observed in action — with the only exception being the adult male. Motion sensor cameras captured them using climbing movements most often, followed by arm swinging.

‘Larger juveniles did not use the rope bridge often and were instead regularly recorded leaping across the forest gap with the adult male,’ said Dr Chan. 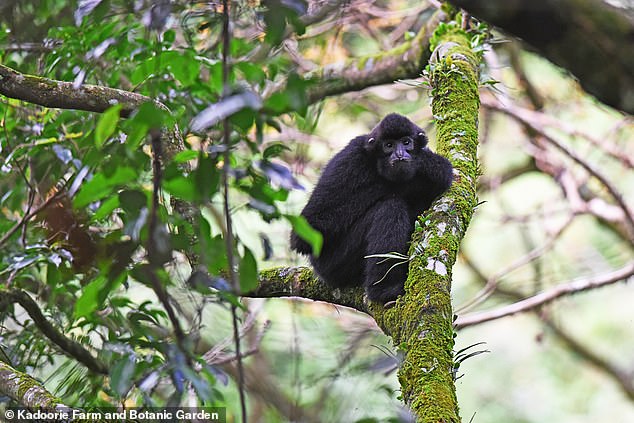 Experts who suspended ropes some 30 feet above ground across a damaged patch of forest 52 feet wide have filmed the gibbons, pictured, using the bridge for the first time

Hainan gibbons travel above ground from tree to tree. Gaps in the canopy — whether natural or manmade — can restrict populations to a specific area.

This limits foraging and breeding — and increases the risk of predation by eagles, hawks and poachers. The animal is a prized pet and is also used in medicines.

The makeshift canopy bridge has enabled the gibbons to travel between two areas of habitat separated by a 50 feet (15 metre) -wide gully formed by the mudslide.

The project could help save the Hainan gibbon — and other animals at risk from climate change, deforestation and intensive farming. 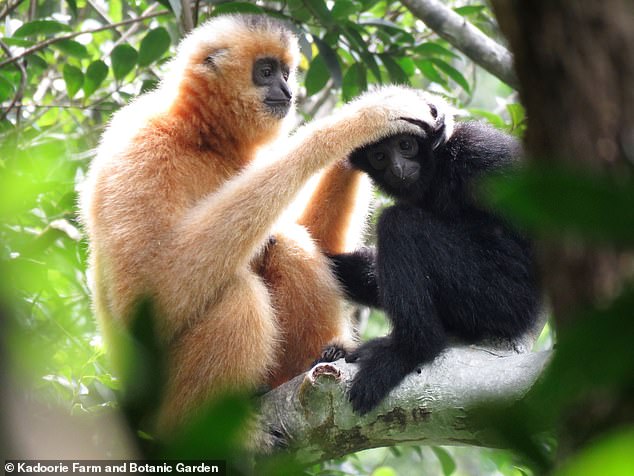 The Hainan gibbon — only found on the island of the same name in the South China Sea — is the most critically endangered primate , with a population of only 30

The gibbons were once distributed across half of China, according to governmental records that date back to the 17th century.

They had long vanished from the mainland by the late 1950s, but their population on Hainan Island still numbered over two thousand individuals back then.

However, human activity — specifically, hunting and the destruction of the ape’s habitat — is to blame for their fall in numbers over the following half century.

Today, the enigmatic primates occupy only a small patch of remnant rainforest, which continues to shrink.

With the ongoing destruction of lowland forest, the gibbons have been forced to take up residence in less-suitable mountainous forest. 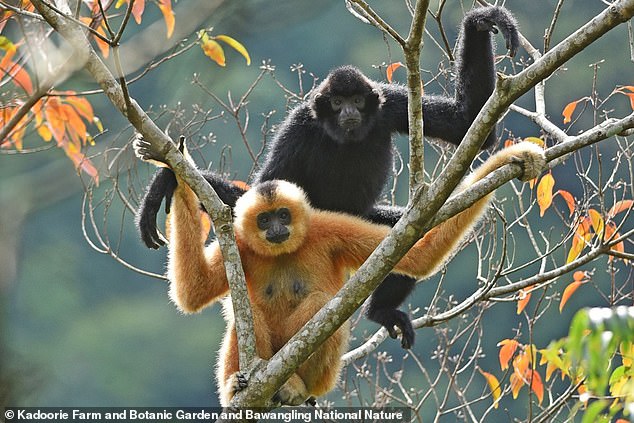 The Hainan Gibbon lives an arboreal — or tree-based — life and experts say that it has never been seen on the ground, meaning that it needs our help to cross gaps in its habitat

‘The effectiveness of artificial canopy bridge as a conservation tool for wild gibbons has not been widely tested, and the results are rarely published.’

‘We constructed the first canopy bridge for Hainan gibbons in 2015 to facilitate passage at a natural landslide.’

‘Mountaineering grade ropes were tied to sturdy trees with the help of professional tree climbers and a camera trap was installed to monitor wildlife usage.’ 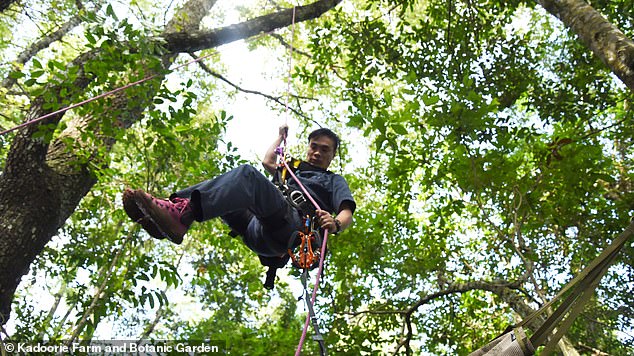 ‘The study highlights the use and value of rope bridges to connect gaps in forest canopies,’ said paper author and biologist Bosco Chan of the Kadoorie Farm & Botanic Garden in Hong Kong. ‘Although restoring natural forest should be a priority conservation intervention, artificial canopy bridges may be useful short-term solutions.’ Professional tree climbers constructed the bridge using extra strong ropes of the type also used by mountaineers

‘The world’s rarest primate can use a simple artificial canopy bridge. It is a valuable conservation tool to reconnect fragmented gibbon habitats.’ said Dr Chan.

The 52 feet-long canopy bridge, he added, was seen to be ‘used in both directions — and both females and juveniles could initiate crossing.’

‘Although we cannot assess fatigue in the ropes, the dense growth of regenerated vegetation underneath the rope bridge is believed to provide a safe landing platform for the gibbons should an accidental fall happen.’

‘We recommend building canopy bridges at the early stage of a forest gap restoration projects to provide temporary connectivity.’

‘But reforestation with fast-growing native trees should also be simultaneously carried out as a long-term solution, where it is socioeconomically feasible.’

The full findings of the study were published in the journal Scientific Reports. 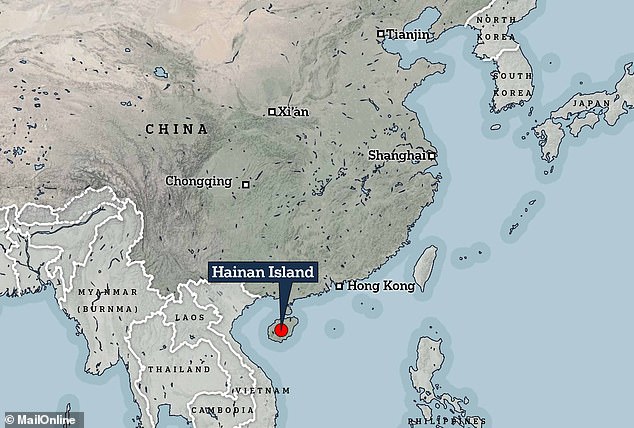 The Hainan Gibbon is only found on the forested Chinese island of the same name, pictured. In the 1970s, the population of the species — the world’s rarest primate — was less than ten and today numbers still only sit at around 30

The world has experienced five mass extinctions over the course of its history, and experts claim we are seeing another one happen right now.

A 2017 research paper claimed a ‘biological annihilation’ of wildlife in recent decades has triggered the sixth mass extinction and says the planet is heading towards a ‘global crisis’.

Scientists warn humanity’s voracious consumption and wanton destruction is to blame for the event, which is the first major extinction since the dinosaurs.

Two species of vertebrate, animals with a backbone, have gone extinct every year, on average, for the past century.

Currently around 41 per cent of amphibian species and more than a quarter of mammals are threatened with extinction.

There are an estimated 8.7 million plant and animal species on our planet and about 86 per cent of land species and 91 per cent of sea species remain undiscovered.

The number of invertebrates at risk has also peaked.

Scientists predict insects may go extinct within 100 years as a result of crippling population decline.

The dawn of the mass extinction coincides with the onset of the Anthropocene – the geological age defined by human activity being the dominant influence on climate and the environment.

Related posts:
Celebrity News:
Jennifer Lopez Fires Back At Critic Who Accused Her Of ‘Definitely’ Having Botox Done
Lori Harvey & Michael B. Jordan Pack On PDA As They Go For Romantic Ocean Dip In St. Barts — See Pics
Barack Obama Shares A Sweet Message To Michelle Obama For Her BDAY!
Jeremy Clarkson fumes at ‘whingeing’ public demanding cash ‘in exchange for scratchcards’
Aarti Sequeira's Sloppy Bombay Joes Fuse Indian Flavors with an American Classic
Recent Posts
This website uses cookies to improve your user experience and to provide you with advertisements that are relevant to your interests. By continuing to browse the site you are agreeing to our use of cookies.Ok