As headlines go, the reformation of ABBA and the release of their new album Voyage is up there with Elvis being found alive and living on an island in the Caribbean, or former Australian prime minister Harold Holt swimming back to shore at Cheviot Beach and waving at the sunbathers. It is not something any of us expected to see in our lifetimes.

What is more, as reunions go, it’s more complex than it seems at first glance. Their album of new music is, in parts, as old as the band itself. And the “reunion” itself will be short-lived. After the release of the new album, the band members have confirmed they will record no more new music. ABBA is back together folks, for one gig. The bad news? They are splitting again, this time, officially. 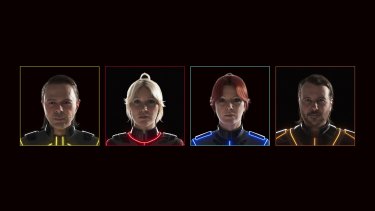 The “de-aged” ABBA as they will appear as their virtual selves in their virtual concert experience ABBA Voyage.Credit:Industrial Light & Magic

After the relatively deafening silence of four decades – interrupted only by the ABBA Gold and More ABBA Gold albums, a couple of ABBA-inspired hit films Priscilla: Queen of the Desert and Muriel’s Wedding and a Broadway and West End musical Mamma Mia! – the Swedish group formally released two singles in September: I Still Have Faith In You and Don’t Shut Me Down. A third, Just a Notion, landed a week ago.

The first of those songs is the pivotal centrepiece of the Voyage jigsaw, with lyrics that read like a spoken word contract on which this entire enterprise – a new album, and a “virtual ABBA-tar” concert experience – is built. “I still have faith in you, I see it now / through all these years, that faith lives on, somehow.” The words speak to both the band and the devotion of its fans.

The next piece in that jigsaw is the album itself: the three songs already released, plus seven more: When You Danced with Me, Little Things, I Can Be That Woman, Keep an Eye on Dan, Bumble Bee, No Doubt About It and Ode to Freedom. As first-albums-in-40-years go it’s sometimes hard to predict, but there is every indication it will be a hit: it has clocked up close to 120,000 pre-orders in the UK alone.

Revealingly, however, not all the music on the album is band new. Just a Notion, for example, was originally written and produced for the group’s 1979 album Voulez-Vous. And unlike the first two new singles, which had new studio recordings from singers Anni-Frid Lyngstad (Frida) and Agnetha Fältskog, the vocals for Just a Notion were recorded in September, 1978.

Another, Bumble Bee, is almost certainly derived from an unreleased ABBA song, Free as a Bumble Bee, written and recorded as a demo in 1978 with vocals by Björn Ulvaeus and Benny Andersson. (Though it’s generally believed the men did not sing lead on ABBA songs, they often did. Some of their best work: Rock Me, Does Your Mother Know and Man in the Middle.) 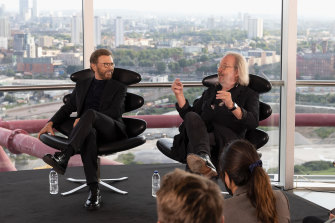 Björn Ulvaeus and Benny Andersson of ABBA attend the London launch of Voyage in 2021.Credit:Getty

In fact, ABBA’s unreleased music catalogue is almost as long as the list of their released music. It is perhaps unsurprising given how mechanically complex their music was, and how their “sound” was achieved by layering the songs, instrument by instrument, and voice by voice, in the studio. The performers themselves lived in the land before autotune – not that they needed it – but the songs themselves were engineered to perfection.

Over the years some of those lost songs have surfaced. I Am the City, recorded in 1982 for an unproduced album, finally made it out on the 1993 compilation album More ABBA Gold, and Put On Your White Sombrero, intended for the 1980 album Super Trouper, was released with the 1994 boxed set Thank You for the Music. And Get On the Carousel, never released on an album, can be heard in ABBA: The Movie.

Others were either given new lyrics, or new titles, and repackaged. Monsieur, Monsieur became My Love, My Life. In the Arms of Rosalita became Chiquitita, turning “happy, as you can be / in the arms of Rosalita” into “try once more, like you did before / sing a new song Chiquitita.” And Happy Hawaii (which was released) and Memory Lane (which was not) were both later reworked into one of the band’s bigger hits, Why Did It Have to Be Me?

And while ABBA’s “sound” seems to have survived intact – if there is anything in the new material to criticise, it would be that it is acoustically connected more to the 1970s and 1980s than to the 2020s, no doubt intentionally so – it is also true to say that in four decades the sound of the band, and in particular its two female singers, has also changed.

In their original iteration, one of the band’s most powerful weapons was the smooth blend of Lyngstad’s mezzo-soprano and Fältskog’s soprano voices. On the new recordings, however, Fältskog’s voice is richer and more mature, slightly lower in register (so much so that one British reviewer mixed up Lyngstad and Fältskog’s work when the singles were released) and both voices sound less at ease with English lyrics, a natural enough side effect of four decades spent away from touring the English-speaking world.

At the same time, there remains something definitively ABBA about the assembly of new material for Voyage. The symbiotic communion of melancholy and joy that seemed to underscore their very best work: Slipping Through My Fingers, Hasta Mañana, Fernando and The Winner Takes It All. And the irresistible rhythm that suffuses their most addictive music: Waterloo, Dancing Queen, Money Money Money and Mamma Mia.

The upside? The album will be followed by a virtual concert experience, using “ABBA-tar” avatars, first in London, and then to tour worldwide. The downside? After the album’s release, the band will disband again, this time for good. Worse than the uncertainty of four decades of silence, it is a musical denouement that cuts deep.

“This is it,” Andersson told The Guardian when the new album was released. “It’s got to be, you know. I never said myself that ABBA was never going to happen again, but I can tell you now: this is it.”

The ABBA Voyage album is released on November 5; the ABBA: Voyage virtual concert launches in May, 2022.