Clearly, we are on a war footing. We are told to brace ourselves for major casualties and to understand that our economic future must be sacrificed for the battle at hand.

In this war, the front line troops are our emergency service workers; doctors, nurses, police and paramedics. 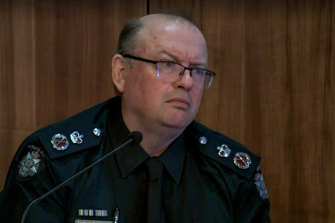 Chief Commissioner Graham Ashton – must see this crisis through.

In any battle, those on the front line must be given priority and this is no different. Which is why we must introduce a priority coronavirus testing system that allows the results from first responders to be fast-tracked in order that they be isolated or returned to duty as quickly as possible.

As Police Association secretary Wayne Gatt says: “Our members are hyper-exposed. It is essential that police and health workers are given priority on testing to get back on the front line.

“If they don’t introduce it soon there will be more police off work than on the streets.”

At last count two police have tested positive (both returning from overseas) and 265 are in self-isolation.

Police are moving from the traditional law enforcement/public order model onto disaster footing – akin to a bushfire or flood response. However, this will require a greater commitment, as it is nationwide and will remain a crisis for months.

So what do we know?

Some modelling suggests between 30 and 40 per cent of police will be infected. Chief Commissioner Graham Ashton told us: “The medical advice is our rate of infection should be around the community infections rate. We have been sourcing PPE [personal protective equipment] from around the country for weeks.”

The Chief Commissioner revealed police have contingency plans to mobilise many of the 1000 Protective Services Officers presently used on Melbourne’s railway stations. As the public transport system winds down, the PSOs may be assigned to patrol food stores, attend hospitals and assist in enforcing lockdown orders.

“We are planning to use them in different roles if there is free capacity,” Ashton says.

He notes that there has already been a change in crime patterns. With pubs and clubs closed assaults are down, people staying at home means fewer house burglaries, less cars at railway stations means a reduction in theft from motor vehicles.

We will wait and see on drug trafficking. The ban on mass gatherings may reduce the use of so-called “party” drugs, although one dealer who has moved to online deliveries says he has never been busier.

As businesses close their doors police anticipate a jump in commercial burglaries and will ramp up patrols in industrial areas.

Police predict there will be a jump in family violence calls, Ashton says: “We expect to see a spike there.”

It will not just be known offenders – there are thousands of people who have lost their jobs and don’t know how they will survive. With no outlets, no escape and alcohol as self-medication, there will be an upsurge in what is our worst crime problem.

With schools likely to close for extended periods, expect an increase in juvenile crime including graffiti, vandalism and opportunistic theft. Internet scams have spiked, with isolated individuals likely targets.

The Police Academy is still operating on a reduced scale – concentrating on recruits and mandatory safety and firearms training. All other courses are cancelled.

Expect a flood of applications to join. Traditionally people head to secure jobs at times of high unemployment.

Police will use drones to monitor public spaces to ensure people adhere to lockdown instructions. How spooky is that? The state using remote-control planes to watch people while the world is infected by a killer disease that started in China. George Orwell on angel dust couldn’t have invented that plot.

Ashton says it is not a case of enforcement but one of co-operation: “The community hasn’t seen something like this since World War I. You must put the community first for the greater good. If you don’t, vulnerable people will die.

“We need the community to get behind this. Make sure you do the right thing. How long this lasts relates to how the community complies with the rules.”

In the last couple of weeks, the government has advertised for applications for the position of Chief Commissioner, with Ashton set to retire in June.

Clearly this is nonsense. It is a worldwide search, yet overseas applicants would not be able to get here for an interview. And if senior interstate police have time to complete a detailed application during a national emergency, we don’t want them.

Ashton must be extended until the crisis is over. You don’t change captains in the middle of a storm.

It is almost certain parole restrictions will be relaxed and prisoners nearing the end of their sentence and those (non-dangerous) infirm ones will be released into home detention to lower their infection risk.

If there is no spike in crime when the world returns to some form of normality, we should rethink our present race to record prison numbers.

In Victoria, prison numbers are at an all-time high of around 8000 and projected to reach 11,000 in 2023. The annual cost of running the state's prisons is now more than $1.6 billion, triple the outlay in 2009-10. Then there is another $1.8 billion allocated for building jails.

When we come out of this, we will have less cash than a tone-deaf busker with BO and if we could get away with not building new prisons for a while the money could be spent on finding people jobs.

Courts have reduced to core duties, with procedural mentions abandoned. Perhaps this will result in forced efficiencies being introduced on return. Magistrates holding sessions inside prisons rather than relying on hundreds of inmates being transferred to court would be a good start.

There is no doubt self-isolation is taxing. In times of disaster and triumph we gather together to share. After the Bourke Street Mall massacre, strangers headed to the spot to mourn. Even in the darkest days of World War II the pubs stayed open as a relief from the darkness. The movies were either light or laced with propaganda, painting the war as a march to victory.

Today, with 24-hour news streams and never-ending social media, we can nearly drown in bad news. It is therefore vital we all build our own survival plans for the weeks and months ahead. Reach out to someone you think is struggling – ring a friend, text a colleague, just don’t let the world shrink around you.

We at Naked City attempt to find experts to deal with any existing conundrums, which is why we turned to the ever-colourful Mick Gatto on the issue of self-isolation.

Gatto is a gregarious man who loves nothing more than holding court (rather than being in one) at a large restaurant table with his closest mates, accompanied by a cheeky local red and a splash of Johnnie Walker Blue. 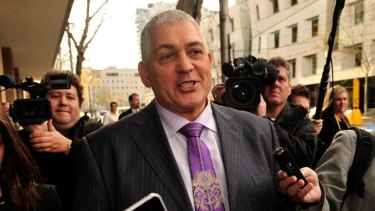 Mick Gatto after he was acquitted of the murder of Andrew “Benji” Veniamin in 2005.Credit:Jason South

But he knows how to deal with social distancing, having spent 14 months in solitary confinement between March 23, 2004, when he was charged with the murder of hitman Andrew Veniamin, and June 15, 2005, when he was acquitted in the Supreme Court.

While we have some movement and the capacity to communicate via phones and social media, Gatto was locked in a cell not much bigger than a bathroom for 23 hours a day.

“You have to keep both your mind and body busy. I would write letters, exercise for hours and read my Brief of Evidence until I knew it backwards.

“You have to stay busy if you want to stay sane.”

Gatto, a former heavyweight boxer, shadowboxed for round after round, day after day. When he turned up at the Supreme Court for his trial, he was back to his fighting weight and was 30 kilos lighter than the day he shot Veniamin (in self-defence).

Gatto has a reputation of not always following the rules but this time he is on the side of law and order: “We have to self-isolate and commit now or many more people will die.”

For more than 60 years we have lived in a country without major violence, civil unrest, savage unemployment, class war or religious conflict. We are better educated, largely better paid, better fed, live longer and have one of the best health systems in the world.

We live by the rule of law, have a justice system that works and a democratic process that is trusted. Generations of freedom have allowed us to indulge our individual ambitions and interests as we see fit. But the world as we know it has changed and there is no going back – at least in the short term. Our political leaders, the people we elected, have been clear: it is time to put the community first. "I want" is no longer an option.

The days, weeks and months ahead will define us as individuals and as a community.

History will judge us. The rest of the world was hit by a tsunami they didn’t see. We are one of the few nations given plenty of warning.

If you sit on the beach when the wave is coming you will drown. If we don’t do what the experts say you will be killing people and destroying our children’s economic future in the process.

The longer we take to lock down, the longer will be the road to recovery. The choice is yours.