For the last ten years, Tom Lewis has been searching for something. He’s not afraid to admit that, at times, it’s driven him mad with frustration and left him down rabbit holes of despair but, in spite of that, he’s never been tempted to stop looking.

It was at the 2011 Open Championship that Lewis, then only 20 years old, surged into a first-round lead at Royal St George’s. His opening round of 65 was the lowest score by an amateur in the tournament’s history, he inherited the spotlight usually reserved for Rory McIlroy, and left aggrieved only at not having ultimately finished in better than 30th place. What’s more, with the world sprawling at his feet, Lewis took everything in his stride, winning just a month into his professional career and, at that stage, few would have dared put any limits on his potential.

“It was just another round of golf for me,” he says. “The ball doesn’t know what’s going on, I just went there, kept to my routine and tried to get it in the hole as quickly as possible. Obviously, after the Thursday, it blew up and it became harder to manage. That exposure was always going to exceed everything else. It was a great experience and something I’ll never forget.”

But as The Open returns to Royal St George’s this week, Lewis won’t be in the field. He is ranked as the 134th best player in the world – a feat earned only through consistent and indisputable success – but against his own standards, that status bears little illusion of achievement. He dreamt of majors, Ryder Cups, and a legacy that would outlive his own career – ambitions that never felt unrealistic – and he’s still searching for the seeds of potential that made him such a standout prodigy, even if he suspects they might never blossom to the heights he hoped.

“I’ll always be frustrated because my talent is high compared to my performance, there’s a big gap there,” Lewis says. “I’m always going to have lost time. Will I ever achieve what I was capable of? No. When you have a lot of ability and you know you can do better, and it’s taken many years, it can eat you up. Yeah, [I see them as a failure]. If you fail all the time, does that make you stronger when success comes? That’s something I don’t think I’ll ever know.”

Always a relentless practiser, regardless of form or fortune, Lewis has been working harder than ever in pursuit of a breakthrough. In 2018, he brought a cathartic relief to a hollowing loss of form, winning his second European Tour event a full seven years after the first. “When you go through struggles in life, you appreciate things that happen to you rather than get given to you,” he says of that victory in Portugal. And a year later, after showing his prowess on the links again with an eleventh place finish at The Open, Lewis earned his PGA Tour card and has since had four finishes inside the top-25 and held a 36-hole lead at the Rocket Mortgage Classic only a few weeks ago.

Those results represent a significant uplift, even if Lewis is still constantly grappling. But rather than chasing shadows, he’s begun to accept that, no matter how contradictory it might feel, he has to suffer the disappointments with freedom. It’s by no means an air of complacency, but then perhaps he can alleviate the burden of pressure he puts on himself.

“I won’t stop trying but it can be a bit like a wet bar of soap,” he says. “You hold onto it too hard and it slips out of your hands. You’ve just got to allow it to happen. It’s taken me more than nine years to figure that out. I’m not going to quit, I’ve had those doubts, but I know if I keep chipping away good things will happen. Golf has given me a lot of disappointment but deep down I’ve always loved it. There are guys in the top-30, even the top-10 who struggle with these thoughts, too. It’s important to be open and honest and realise things aren’t always as good as they appear on the outside.” 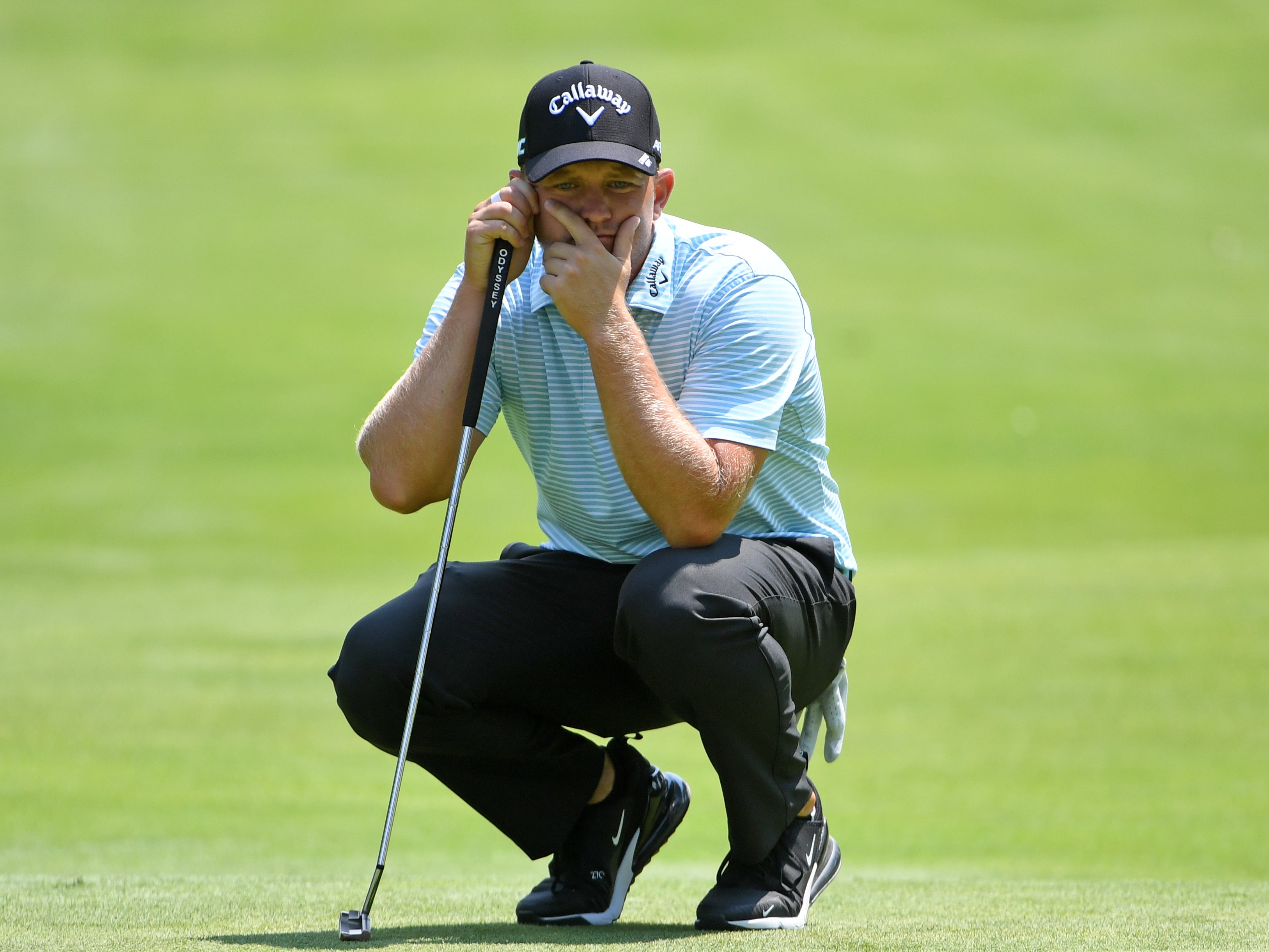 Tom Lewis lines up a putt on the PGA Tour

That sense of perspective has also allowed Lewis to find more happiness in areas of life he’d felt like he had to put second or sacrifice to claw back lost time. “I used to focus too much on my career sometimes it overpowered my life,” he says. “I just wanted to be good. As I’ve gotten older, I’ve realised I’m not going to change the world, I’m not going to be a hall-of-famer and achieve everything I wanted. So then it makes you think what can I achieve? I can be a good person, a good husband, a good dad – those are all things that will probably come into my life over the next few years.”

If Lewis ever feels like he’s “deteriorating from being a good person or a good golfer”, he circles back to his earliest lessons. As a child, he’d hit hundreds if not thousands of balls every evening at a night-lit range in Hertfordshire with his father, Bryan, who was also once a European Tour pro. “Anything I ever learnt, he taught me,” Lewis says. “I’ll go through ups and downs but dad always taught me never to regret anything and look back and say I gave it everything. Things will turn around and when they do, it will be great.”

And the fearless 20-year-old who took The Open by storm a decade ago, what would Lewis tell him, knowing what was to come? “I’d be more appreciative of where I was,” he says. “I led The Open for one day. Maybe next time I can lead it for two, and the next 10 years can be more successful than the last.”