Tim Josef from Melbourne's south-east is pressed for time and with twins on the way, going to the shops during the coronavirus pandemic is not an option, so he has been ordering products online.

While he was expecting to receive texts from Australia Post, he became suspicious when one message asked for money to complete a shipping payment. 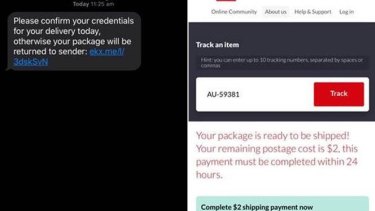 Tim Josef received a text message claiming to be from Australia Post, which then took him to this website (right).

While malicious emails including fake invoices and false changes to banking and phone details have surged during the pandemic, text message scams are becoming more popular.

"Most email services filter out phishing pretty regularly, which is why scammers are starting to switch to text messaging," MessageMedia's chief technical officer Ben Mostafa said.

"They're getting smarter about how they pretend or imitate another business, making their messages a bit more believable than they used to."

MessageMedia is an Australian portal for businesses to send text messages to clients and potential customers.

"SMS is a pretty powerful medium, the government and a lot of businesses use it, but you can see how it can be used to trick people," Mr Mostafa said.

Australia Post said they have "been made aware" of Mr Josef's issue.

"Please note that Australia Post will never email or text message you asking for personal information, financial information or a payment," a statement read.

"If you are in doubt about the authenticity of an email, text message or phone call, please delete it immediately or hang up."

He said the most important thing you can do is to stay calm, verify the sender, and avoid clicking on any links.

"The same rules apply all the time, but even more so during this crisis. You have to verify the sender, which is a little bit harder with SMS than email.

"Random messages that offer deals, information or other things that are too good to be true usually are."

Meanwhile, the consumer watchdog is urging people to be wary of scammers calling financially vulnerable Australians and offering them assistance with accessing their superannuation.

The government announced that people experiencing financial hardship during the pandemic can have partial access to their superannuation from mid-April.

“Scammers are cold calling people claiming to be from organisations that can help you get early access to your super,” Australian Competition and Consumer Commission (ACCC) deputy chair Delia Rickard said.

“For most people, outside of their home, superannuation is their greatest asset and you can not be too careful about protecting it.”

“The Australian Taxation Office is coordinating the early release of super through myGov and there is no need to involve a third party or pay a fee to get access under this scheme.”

“Never follow a hyperlink to reach the myGov website. Instead, you should always type the full name of the website into your browser yourself,” Ms Rickard said.

Since the government’s announcement in March, there have been 87 reports of these types of scams, but no reported losses.

The World Health Organisation (WHO) has already issued warnings alerting people to an increase in cyber-criminals disguising themselves as the WHO. They use emails, websites, phone calls, text messages and even faxes.