Rapper Gift of Gab, who was half of the duo Blackalicious, has died at age 50. DJ Xavier “Chief Xcel” Mosley confirmed his death on the group’s Instagram, writing, “It is with much sadness and a heavy heart I announce the passing of my friend and brother of 34 years, Timothy Jerome Parker aka The Gift of Gab. He returned peacefully to the essence on June 18, 2021.”

According to the New York Post, the rapper died of natural causes but had kidney problems that required him to get dialysis several times a week. In 2012, Gift of Gab suffered kidney failure and was hospitalized for a month. He later recalled, “I thought I had the flu, but then I realized I couldn’t walk 10 steps without being exhausted. I went through a lot of things mentally.” The rapper later received a kidney transplant in 2020 and went on tour with Blackalicious shortly after. It was during that tour where he played his final concert, before the COVID pandemic.

Born in Sacramento, California in 1971, Gift of Gab met his future bandmate Chief Xcel in high school. The two eventually formed Blackalicious in 1992 and released their debut single “Swan Lake” two years later, per Entertainment Weekly. The Bay Area duo released several EPs including “A2G” in 1999, which featured their most famous single, “Alphabet Aerobics.” Gift of Gab “is survived by two brothers, one sister, many nieces and nephews, countless friends, and fans across the globe,” according to a statement.

Gift of Gab 'dedicated his life to his craft' 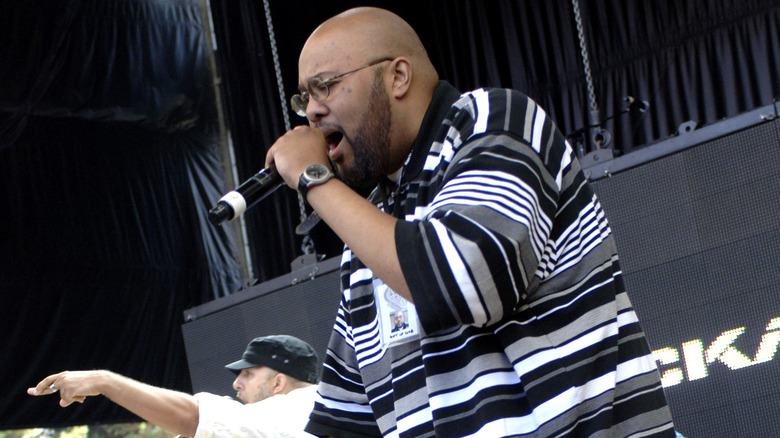 Late rapper Gift of Gab was best known for his fast-paced linguistic mastery, especially in Blackalicious’ biggest hit, “Alphabet Aerobics.” It appears Harry Potter himself, Daniel Radcliffe, was a fan of the group, and showed them some love when he performed “Alphabet Aerobics” on a 2015 episode of “The Tonight Show.” Gift of Gab later told the New York Post that Radcliffe “killed it,” adding that he “kept in time and everything. He did a great job — I was actually a little surprised!”

The late rapper’s bandmate Chief Xcel highlighted Gift of Gab’s skill in a tribute to his friend, saying, “Our brother was an MC’s MC who dedicated his life to his craft. One of the greatest to ever do it.” He continued, “He’s the most prolific person I’ve ever known. He was all about pushing the boundaries of his art form in the most authentic way possible.” Chief Xcel also noted how Gift of Gab “truly believed in the healing power of music.”

In addition to the music he made as part of Blackalicious, Gift of Gab also released three solo albums and two other albums as part of the supergroups Quannum MCs and the Mighty Underdogs, according to Entertainment Weekly. A press release announcing his death noted how even during the pandemic, “he was always focused on the creative pursuit and getting back out to perform and interact with his fans.” It’s clear that Gift of Gab will be greatly missed.