As the world prepares for the Tokyo Olympic Games to begin, one thing many might not take note of is the absence of Black Lives Matter statement clothing.

While it may seem one has little to do with the other, the ban on BLM merchandise came amid the International Olympic Committee Athletes Commission recommending the increase of opportunities for athletes’ expression during the Olympic Games, including adapting the Olympic Oath to include messaging for inclusion and approved words for collective messaging in the Olympic Village and on athlete apparel.

So why has this phrase been singled out?

In early May, the IOC Athletes Commission made clear it wouldn’t embrace the Black Lives Matter phrase, following recommendations on Rule 50 and athlete expression, stating they “are fully supportive of the freedom of expression,” but of the words that are approved to be used — including peace, respect, solidarity, inclusion and equality — none are specific to race.

The IOC in July updated its Rule 50, which prohibited protests or political displays during the Games, and it now allows athletes to “express their views” when speaking to the media in mixed areas and in press conferences, during interviews and team meetings, through traditional, digital and social media, and on the field of play before competition, as long as it’s not targeted or during another athlete or team’s national anthem or introduction.

A Look at Olympic Style Over the Years

The statement continued, “This position was also widely expressed in the IOC AC qualitative consultation. The argument the IOC AC heard was the need to ensure that athletes and their special moments are respected, and that the focus of the Olympic Games remains on the celebration of the athletes’ performances, sport and the Olympic values. However, some athlete representatives took a different view, using freedom of expression and freedom of speech as their argument, and felt that this outweighed the other arguments.”

The IOC AC said it took both views into account and consulted human rights and sports law experts. The organization declined to comment further on the decisions.

“The T-shirt, the statement, it is hugely powerful,” said Terri Jackson, executive director of the Women’s National Basketball Players Association, which has made its own statements in support of racial justice in the last year. “The statement is powerful in and of itself. Plus the most dynamic, authentic, informed, engaged, unified display by players. It’s the statement, the T-shirt and who’s wearing it.”

Antjuan Seawright, a writer and CBS News commentator who owns a public relations and advertising firm and has spoken on the matter, called the IOC’s decision “unfortunate.”

“We hear the words freedom of speech and freedom to express, but the fact of the matter is, in America, where a number of the athletes come from, it’s critical that they’re able to provide solutions,” he said, addressing the need to strike a balance between regulations and players’ freedom of speech. 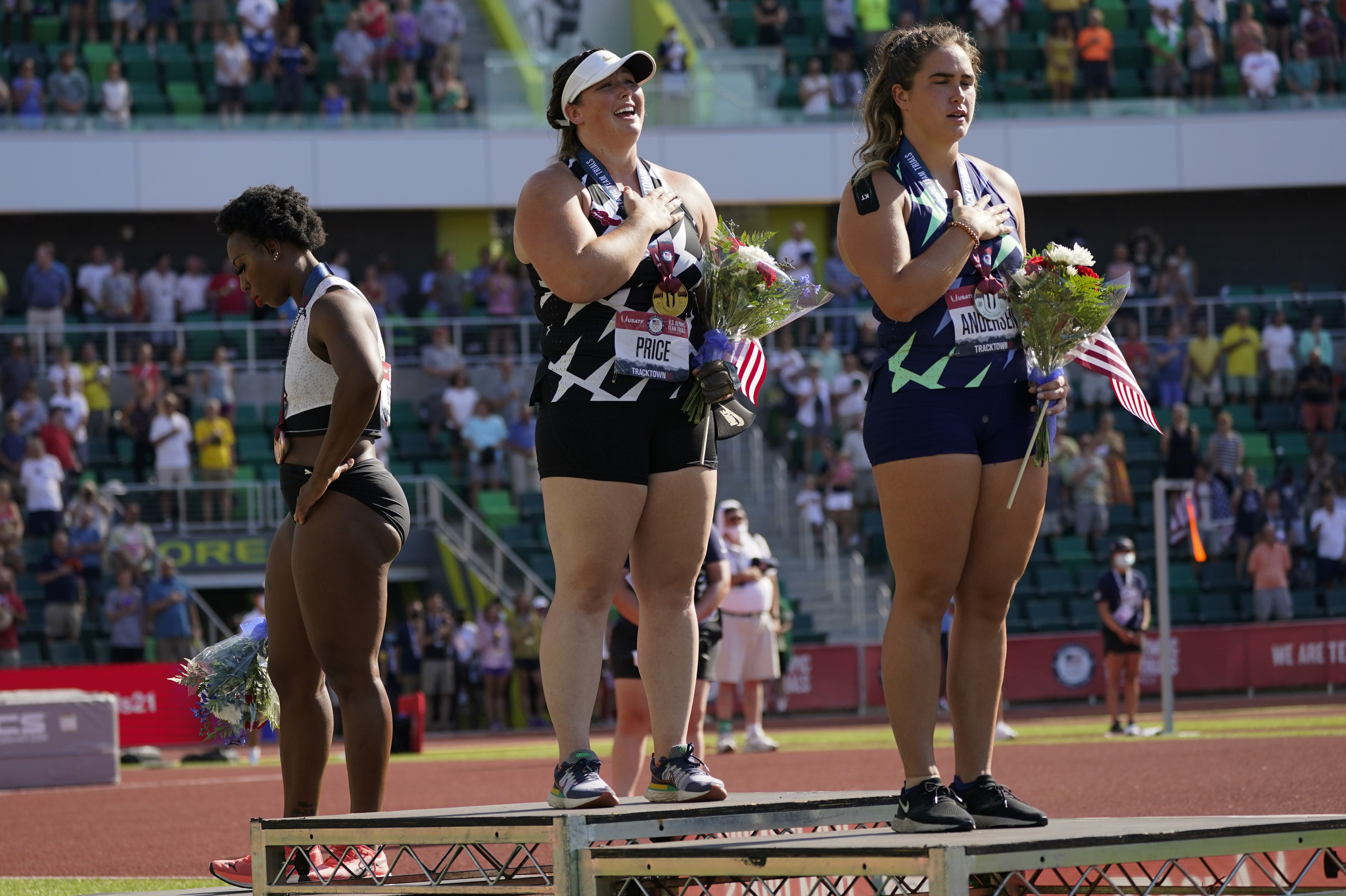 Gwendolyn Berry looks away as DeAnna Price and Brooke Andersen stand for the national anthem after the finals of the women’s hammer throw at the U.S. Olympic Track and Field Trials in Eugene, Ore. Price won, Andersen was second and Berry finished third. Tommie Smith, John Carlos and Berry are among the more than 150 educators, activists and athletes who signed a letter Thursday, July 22, urging the IOC not to punish participants who demonstrate at the Tokyo Games. Charlie Riedel/AP

Despite steps the IOC AC has taken to be accommodating when it comes to social justice — like providing a platform called Athlete365 for athletes to discuss topics important to them — it has received backlash on social media for not including Black Lives Matter as one of the approved words or phrases for apparel.

“When you’re talking 70 percent of the athletes, who are you talking about?” Dr. Harry Edwards, American sociologist, civil rights activist and co-creator of the Olympic Project for Human Rights, said, addressing the IOC’s study. “They didn’t say 70 percent of the Black athletes.”

“You have to dive deeper into that poll,” WNBPA’s Jackson added. “When you dive deeper, you then look at the demographics of the athletes who were responding to that. I don’t know who was included in that poll, but I think if you look at the demographics and expand it on sport, race and gender, that’ll tell you something different about where the athletes are on this issue.”

The IOC had not shared any further insight on the demographics of the study.

Edwards said, however, that he’s “not surprised” at the IOC’s decision to exclude BLM apparel at the Games given its history, including “its heavy-handed treatment of minority athletes from Jim Thorpe to Jesse Owens to [Tommie] Smith and [John] Carlos to Sha’Carri Richardson [whose one-month suspension over a positive marijuana test was a decision made by the U.S. Olympic Committee, not the IOC] to its lack of non-white top leadership throughout its tenure over the Olympic movement — all of which adds up to a portrait of what is a racist, right wing, if not fascist-leaning Olympic leadership organization in serious need of being ‘reimagined’ in the 21st century.”

Olympic gold medalist Tommie Smith and Olympic bronze medalist John Carlos made headlines when they both raised the Black Power fist on the podium of the 1968 Summer Olympics in Mexico City. They, as well as Olympic silver medalist Peter Norman, also wore patches for the Olympic Project for Human Rights, an American organization Smith, Carlos and Edwards started in October 1967. The OPHR was created to protest racial segregation in the U.S., South Africa and globally, as well as racism in sports more broadly. The now-iconic podium protest got the two athletes suspended from the U.S. team, kicked out of the Olympic Village, and the backlash was harsh.

“The second most political international forum is the Olympic Games,” said Edwards. “The stage was not turned into a political platform in 1968 — it always was.” 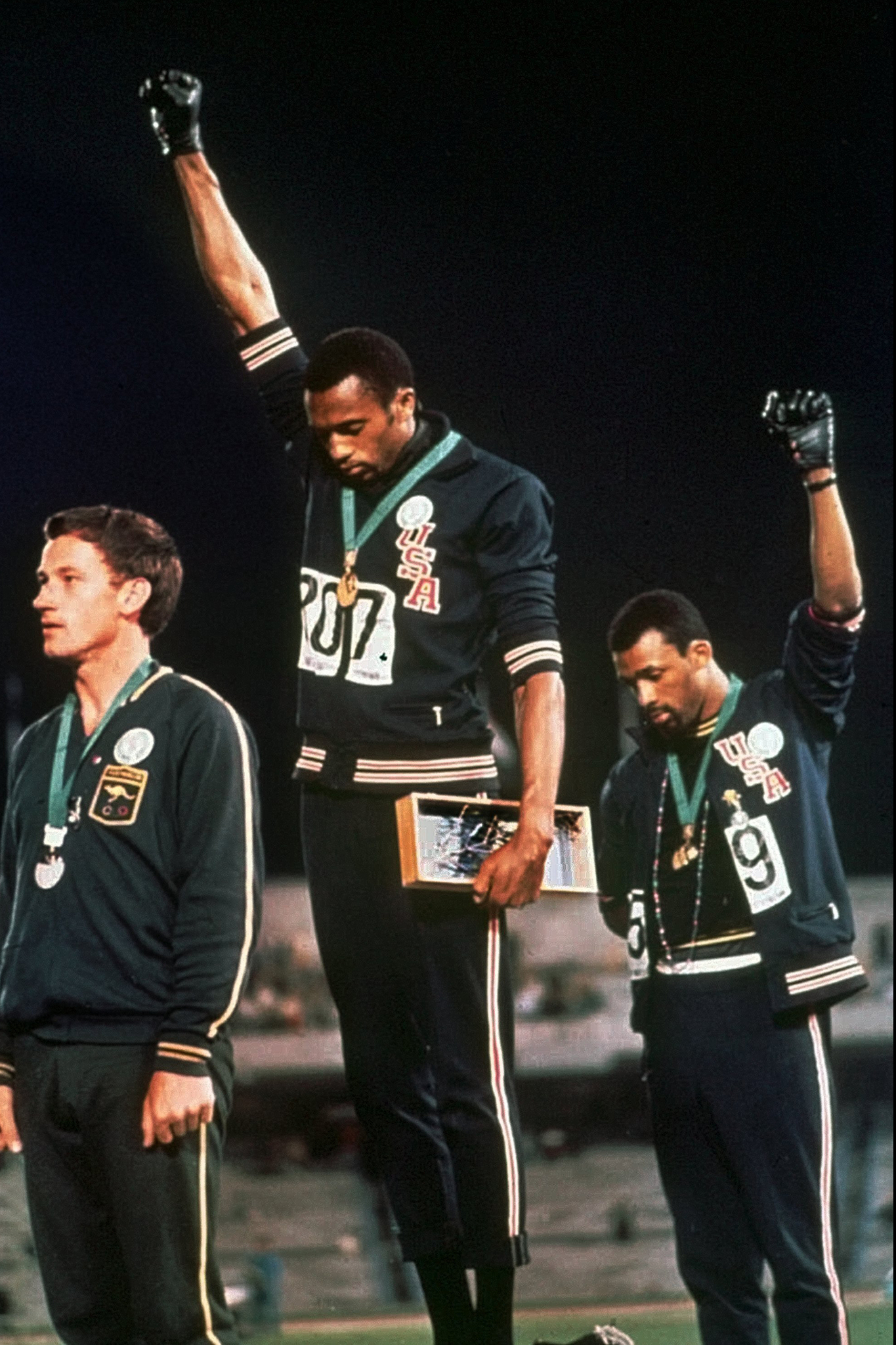 Tommie Smith and John Carlos raise their gloved fists after Smith received the gold and Carlos the bronze for the 200 meter run at the Summer Olympic Games in Mexico City. AP Image

Amid the protests in 2020 against the murder of George Floyd and killing of Breonna Taylor by law enforcement, cities painted Black Lives Matter on streets and murals. Some brands joined in on the movement, too. Nike and Adidas made T-shirts for NBA, WNBA and MLS athletes. But the phrase won’t make it to the Olympic stage in Tokyo.

CBS’ Seawright believes athletes have more of a platform than even elected officials and says they have an obligation to be involved.

“Athletes have spoken out throughout our country’s history,” he said. “Athletes have always been spark plugs of change in this country to push toward progress — Jackie Robinson, Wilma Rudolph, Muhammad Ali. Social justice work should be no different than doing social services. No different than giving money to a foundation.”

When it comes to the Olympics, Jackson said the IOC including Black Lives Matter would have been a moment “to be on the right side of history,” and that the cause is about humanity and standing up for what is right.

As Seawright added, “The Olympics stage is the largest stage any athlete could have outside of the sport they’re participating in and history has set a precedent for them to do that. This suffocates progress and change in America in this demonstration to the world. I think that at some point with this decision, people will look back in retrospect and say we could’ve done this in a different way. It has nothing to do with politics. I feel this has everything to do with people. Black Lives Matter should be viewed as a pro people statement.”