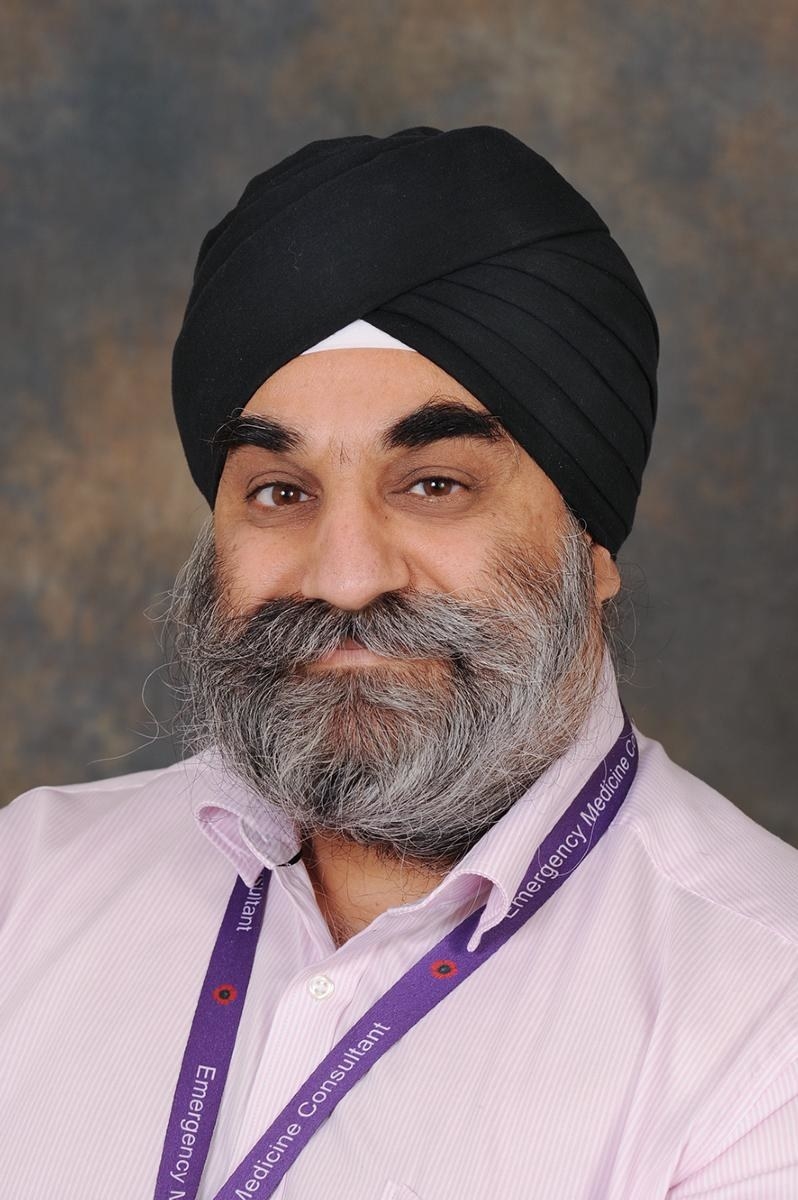 A consultant described by his colleagues as the “father of the emergency department” in Derby is one of the latest victims of the novel coronavirus.

Dr Manjeet Singh Riyat, a 52-year-old celebrated as the first Sikh to be appointed as an emergency medicine consultant in the UK, died at Royal Derby hospital on Monday, April 20.

The father-of-two has been remembered for his impact in the medical profession, including being among the first clinical research fellows in the UK, and contributing to the birth of academic emergency medicine.

Remembering his former medical school friend, Dr Jagdeesh Singh Dhaliwal told BuzzFeed News about how the pair had met on his first day of Leicester Medical School back in 1986, in university halls.

“He was in a room four doors down, he was warm, engaging and brimming with energy and enthusiasm. At university, he was always ‘the adult in the room’ amongst our group of fresh-faced naive 18 year olds.

“Wise beyond his years and always measured, highly principled and pragmatic. He had a deep innate desire to do good in the world by being of service to others, whether you were a friend, a patient or a colleague. Manjeet would be the person you knew you could ask for help and he would never refuse. He would go out of his way to do the right thing.”

Dhaliwal, who is now based in Australia, said the news of Riyat’s death had impacted their old circle of friends who remembered the consultant for his “great sense of humour” and one liners that would leave the group floored with laughter.

He said: “There’s been an outpouring of grief today amongst old medical school friends and Manjeet’s colleagues and students. I’m terribly sad for his wife and sons, his wider family and also gutted for the whole community.”

Dhaliwal also paid tribute to his friend’s career, which has made him a standout figure. “Manjeet was at the pinnacle of his career with a wealth of knowledge and hard won on-the-job experience and know-how, which is really the lifeblood of high quality clinical care — for our patients, doctors at the stage of their careers such as Manjeet possess immense wisdom and serve as role models for younger doctors and indeed all other healthcare professionals in their teams.

“I know that Manjeet served as an exemplar in this regard for emergency medicine,” he added.

Gavin Boyle, chief executive of the hospital, said in a statement: “I want to pay tribute to Mr Manjeet Riyat, who has sadly passed away. Mr Riyat, known to his colleagues as Manjeet, was a widely respected consultant in emergency medicine nationally.

“Manjeet was the first A&E consultant from the Sikh community in the country and was instrumental in building the Emergency Medicine Service in Derbyshire over the past two decades. He was an incredibly charming person and well loved.”

The accomplished doctor was also mourned by leaders in the Sikh community. Amrik Singh, Chair of the Sikh Federation (UK) told BuzzFeed News: “We were all deeply saddened by the news of Manjeet Singh Riyat passing away yesterday from Covid-19. Manjeet had spent most of his life helping others as an A&E consultant, from treating the sick to training junior doctors. Something very much in line with his faith principles of being a devout Sikh.”

Dr Kathy McLean OBE, chair of the trust, said: “Mr Manjeet Riyat made a huge contribution to the NHS in Derbyshire and across the field of emergency medicine nationally. I had known Manjeet from when he first joined the Trust in the early 2000s and he very quickly made an impact with his focus on patient care and high standards.”

“It was clear that he was an outstanding emergency medicine doctor and generations of families in this region have benefitted from the care he provided. Manjeet was hugely popular across the hospital and a warm and embracing figure, a person who many of our staff looked up to.

McLean described the news of Riyat’s death as “a terribly sad day for all of those who had the pleasure to have known him and to have worked alongside him,” and extended her condolences to his family.

Riyat qualified from the University of Leicester in 1992 and went on to train in emergency medicine at Leicester Royal Infirmary and Lincoln County Hospital.

Prior to the introduction of paramedics in the region, he acted as team leader for the Accident Flying Squads at both hospitals. His medical career would include him being named as Head of Service for the Emergency Department in 2006, where he would make particular contributions to clinical governance with an emphasis on patient safety.

His “passion for teaching” saw him work as a Derby College tutor for emergency medicine, where he oversaw the training of junior doctors. Riyat dedicated 17 years to serving as an educational supervisor to dozens of regional emergency medicine trainees.

He would also be instrumental in setting up life-saving protocol courses and skills, commonly known as Advanced life support (ALS) in Derby during his time as course director.

She said: “He was consistently generous with his remarkable clinical knowledge to everyone in the team. He had that rare gift of maintaining constant joy in the intellectual challenge of clinical medicine combined with gentle kindness and compassion for his patients. He was a powerful advocate for the sickest patients and was well known for his fair, no-nonsense approach. By contrast, Manjeet could be relied upon to lift the mood with his dry humour and sense of fun.”

“Manjeet was enormously valued and much loved as a colleague, supervisor and mentor as well as for his wise counsel and discreet support in tough times. For many, Manjeet was considered the father of the current Emergency Department in Derby and many more will reflect on how his inspiration has shaped their own careers.

Alongside his illustrious career spanning nearly three decades, it is Riyat’s family achievements that those who paid tribute to him said he was most proud of.

“Manjeet was fiercely proud of his wife and two sons and often shared the achievements and exploits of the boys with equal good humour. He always kept sight of what is really important in life and set an example by living life in keeping with his high standards and strong values. He will be hugely missed.”

His death is the second at the trust following the death of Amged El-Hawrani, an Associate Clinical Director and Ear, Nose and Throat Consultant who passed away on Saturday (28 March).

“Given the data on how disproportionally the Sikh and BAME communities have been impacted by Covid-19, it’s imperative that all frontline staff have the full PPE needed for their work, but also all the information and data on infections and deaths from Covid-19 are properly recorded and reported, so that vulnerable communities like the Sikhs, can be better prepared and manage the risks to save lives,” added Singh.

“The Sikh Federation has also lost two of its respected members to this virus and we offer our deepest condolences to his wife, two sons and wider family. Our thoughts and prayers are with them and may Vaheguru bless Manjeet’s soul and all the family with strength at this difficult time.”