Some 250 Victorians were fined for breaching coronavirus social distancing laws across the Easter weekend, a period that government and experts considered crucial to maintaining Australia's progress on managing the spread of the virus.

Police said 92 of those fines were handed out on Saturday while 158 were issued on Easter Sunday, including to six outlaw motorcycle group members who had gathered in cars on Flinders Street in the CBD. 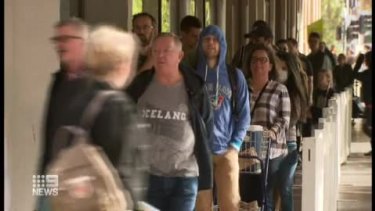 Meanwhile queues snaked around Queen Victoria Market, as people shopped for Easter Sunday, many not adhering to the 1.5m distance rule.

"Plenty of crowds, which is kind of against everything, but you do what you have to do and get back home as quickly as possible," said one shopper.

"I would recommend people do continue to practise physical distancing when they are in queues." 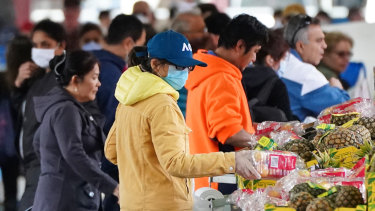 People shop at the Queen Victoria Market while wearing face masks as a preventive measure against the spread of novel coronavirus COVID-19.Credit:Picture: AAP

"Chocolate can be considered a food and can be sold in supermarkets, people are allowed to leave home to get food and essential supplies," she said.

On Sunday, eight people playing loud music and partying in St Kilda East were fined, as were "a number" of overseas tourists partying in a short stay property at Cowes on Phillip Island, police said.

There were also "multiple instances of private gatherings at residential properties", according to police.

There were 1123 spot checks conducted as part of Operation Sentinel on Sunday, meaning 20,426 have been done since March 21.

Of the total 1265 COVID-19 cases in Victoria, there have been 1012 in metropolitan Melbourne and 234 in regional Victoria. On Saturday, Dr van Diemen confirmed an elderly man had died from COVID-19, bringing Victoria's death toll to 14.

There are 118 confirmed cases of COVID-19 in Victoria that may have been acquired through community transmission.

"We are by no means out of the woods yet, this is not the time to be becoming complacent. We will continue to monitor it very closely," she said.

Although she praised Saturday's wild weather as a 'great blessing' in keeping people inside, the Easter weekend proved too tempting for some. 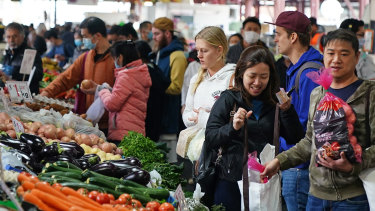 People shop at the Queen Victoria Market on Saturday.Credit:AAP

Phillip Island 72-year-old Vicki Basdekis noticed an influx of out-of-towners to her area.

"Yesterday or the day before it was quiet, it was a public holiday, but today there were a lot of cars, and more people. Yes, more than normal," she said.

She said the amount of people was definitely not as many as there normally are on the Easter long weekend, but there was a definite increase.

"Lots of people have holiday homes in Phillip island," she said.

"It's a bit worrying. People come from a big city and here… we want to feel safe, you know what I mean?"

Susan Hulme, who also lives in Phillip Island said people were not listening to the stay-at-home message.

"I know that some do have holiday houses down here and apparently are allowed to go to their homes here," she said.

But she said there have been some people renting out their homes to holidaymakers, or some people just coming up for the day.

"We have a lot of older people here and they do not need to get sick because others don't care," she said.

"I am staying home. I am not seeing family or friends. With my own health I have to be careful and it upsets me to think I could be compromised just because people really do not care."

"I could not see an influx of tourists at all. It's nothing like previous years. Normally Easter is as busy as Christmas, down here Easter is a huge, huge weekend, but no, very very quiet," she said.

“This is tough for many families, but no Easter holiday is worth a life. Stay at home, protect the health system, and save lives."