Felicidades! Real estate heiress Belén Corsini is breathtaking in a figure-skimming gown in first photos from her wedding to one of Spain’s richest men, the Count of Osorno, at Madrid’s Liria Palace

The grandson of Spain’s wealthiest woman tied the knot with his glamorous fiancée on Saturday in a high society wedding that was the picture of pared back elegance.

Carlos Fitz-James Stuart y Solís, the Count of Osorno, wed his fiancee Belén Corsini at Liria Palace in Madrid, an 18th century estate that has been in Carlos’ family for centuries.

Their union brings together two of Spain’s wealthiest families, the Albas and the Corsinis.

Official photographs released yesterday give the first glimpse inside the intimate ceremony, from the service to the first dance.

Guests were photographed arriving at the event on Saturday but photographers were not allowed inside the family compound. 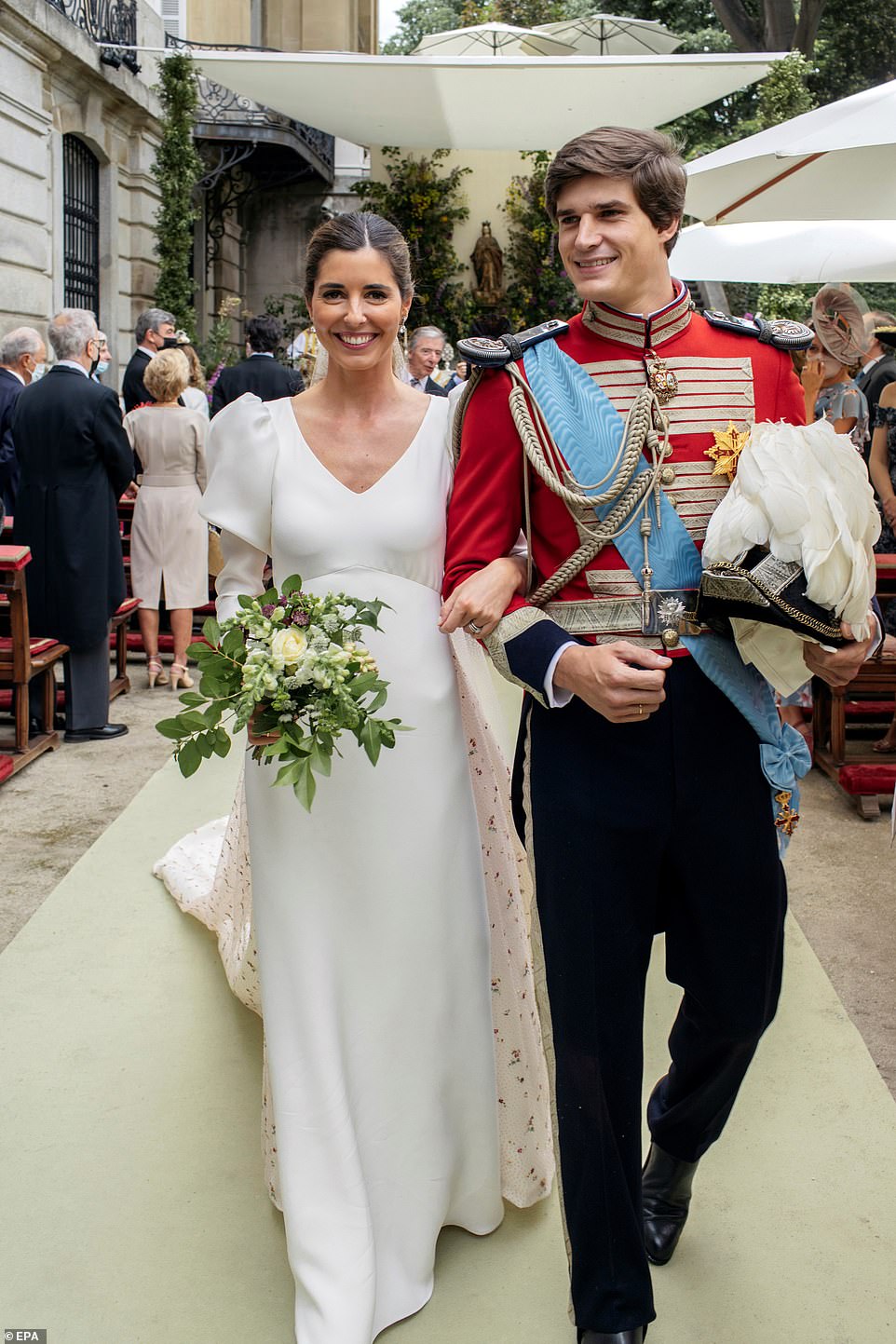 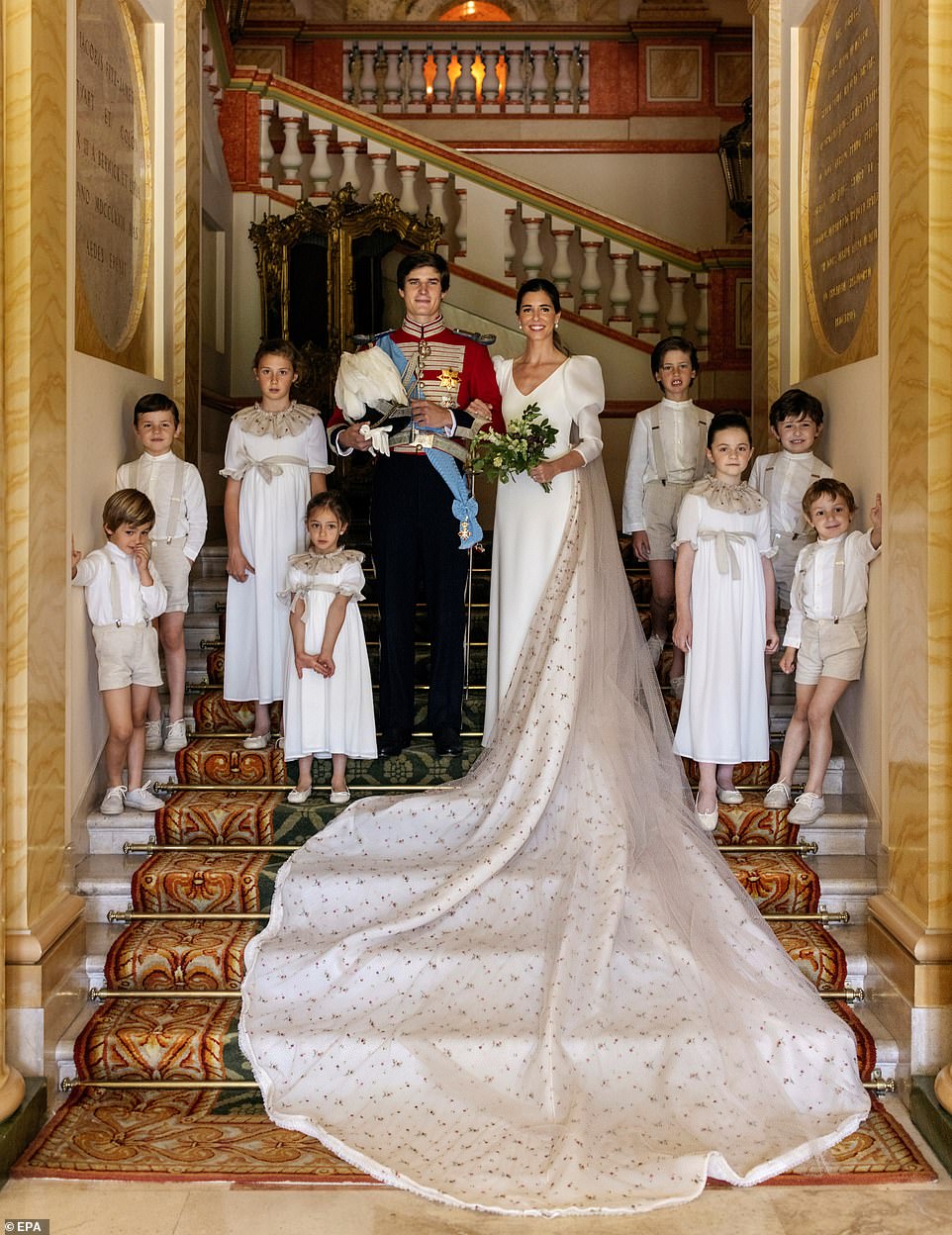 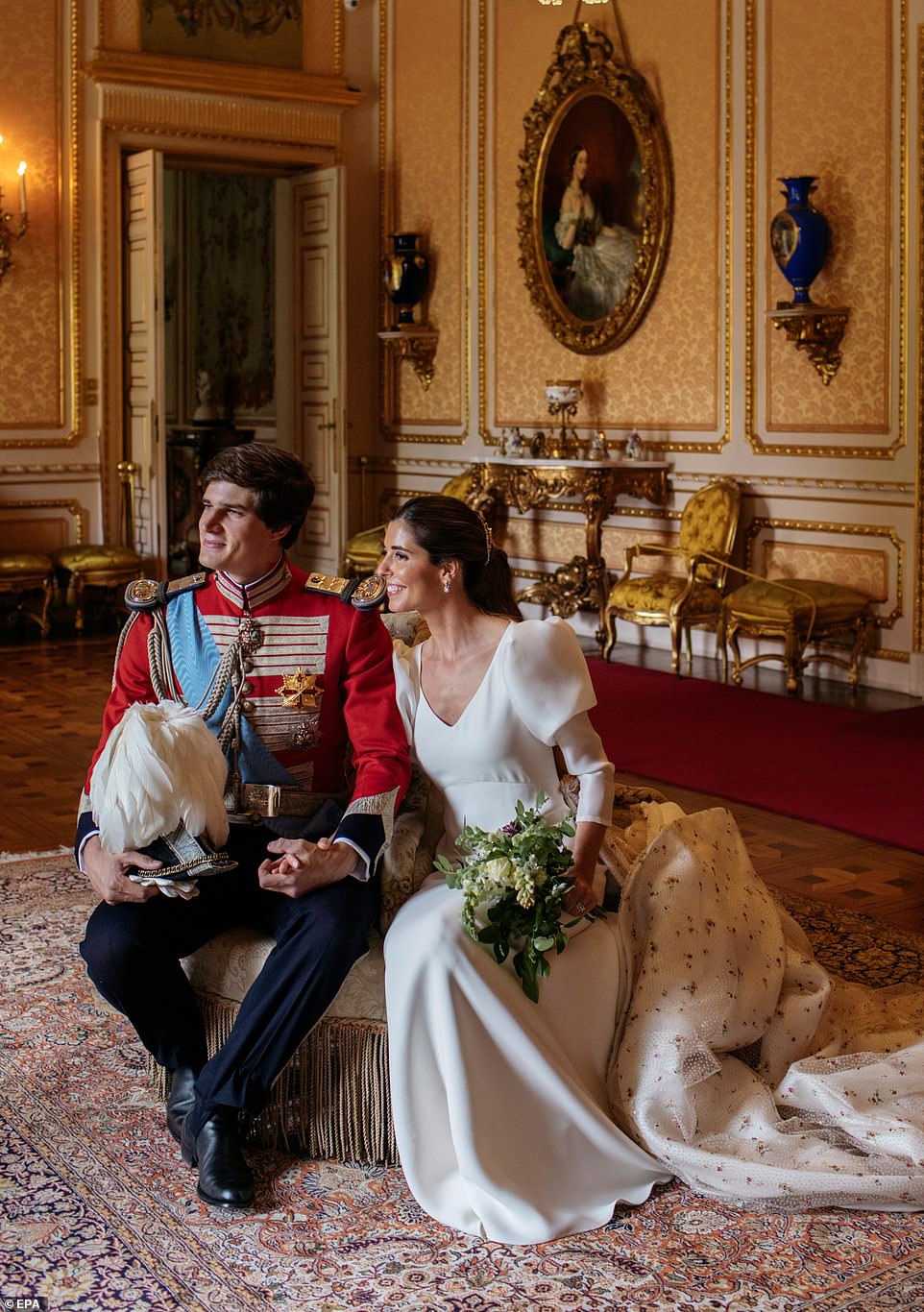 The look of love: Carlos and Belén shared photos of their big day, taken inside Liria Palace’s stunning reception rooms 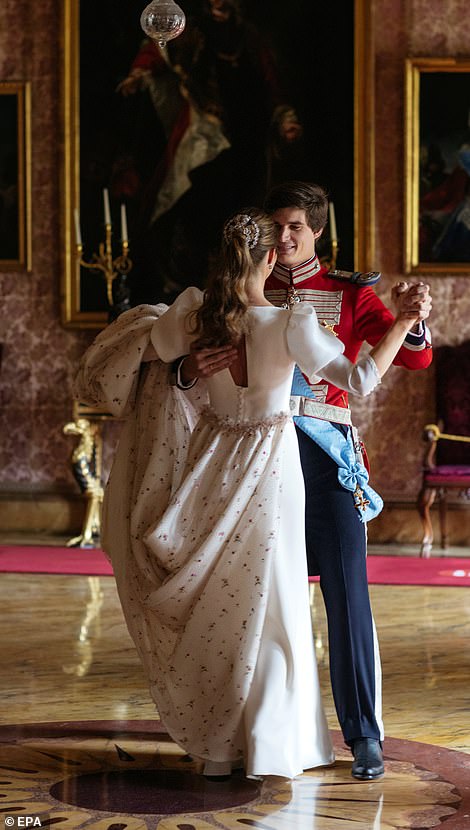 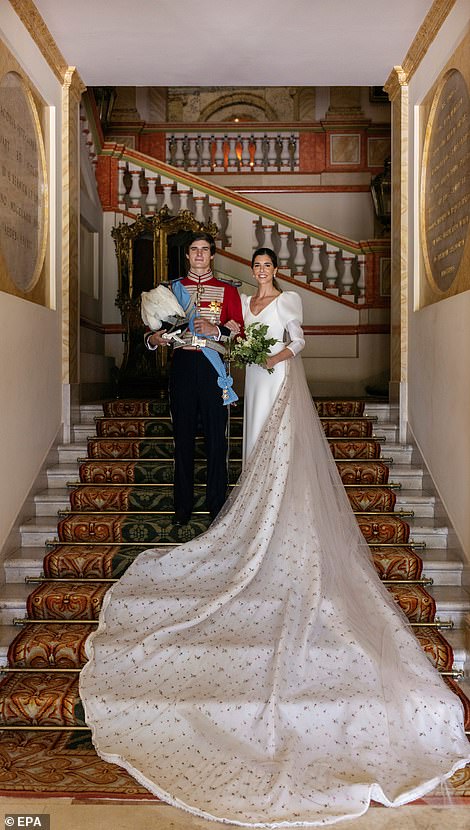 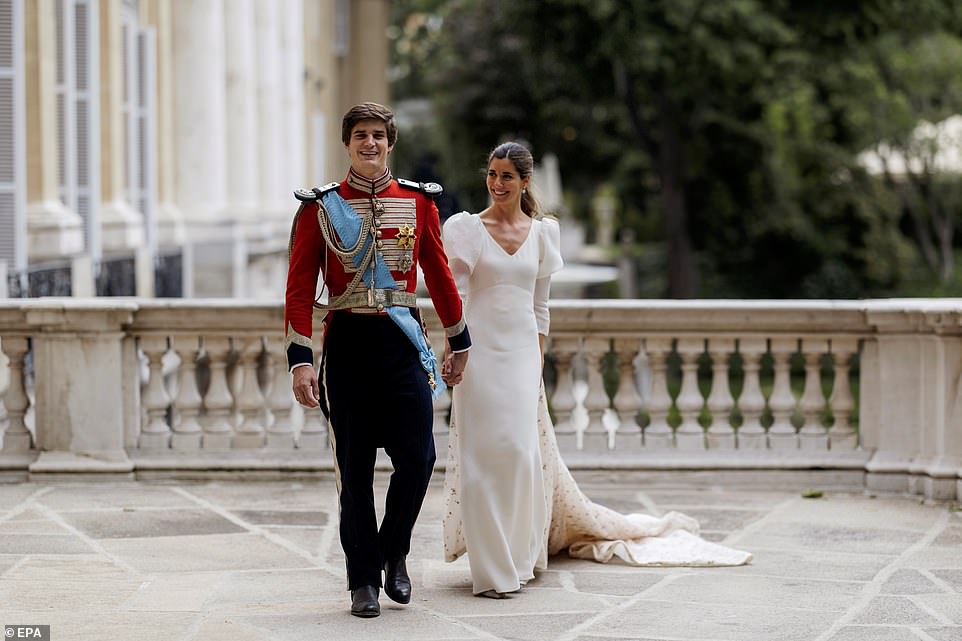 Hand-in-hand: The radiant couple couldn’t keep the smiles from their faces as they took some time together after the service

Typically understated, the bride kept her beauty, hair and accessories simple, choosing a pair of diamond earrings and wearing her hair swept back into a bun pinned with a glittering hairpiece.

Meanwhile the groom Carlos looked dashing in military dress uniform, carrying a hat in his hand as he walked his new bride back down the aisle.

Other photos show the couple walking hand-in-hand through the ornamental gardens and posing inside the palace’s grand reception rooms.

Belén is the great-granddaughter of Carlos Corsini Senespleda, engineer and founder of the construction and public works company Corsan, which was sold for 325 million euros in 2004.

The Count is the youngest son of the 19th Duke of Alba, who inherited an estimated £2.2billion worth after the late Duchess of Alba passed away in November 2014. 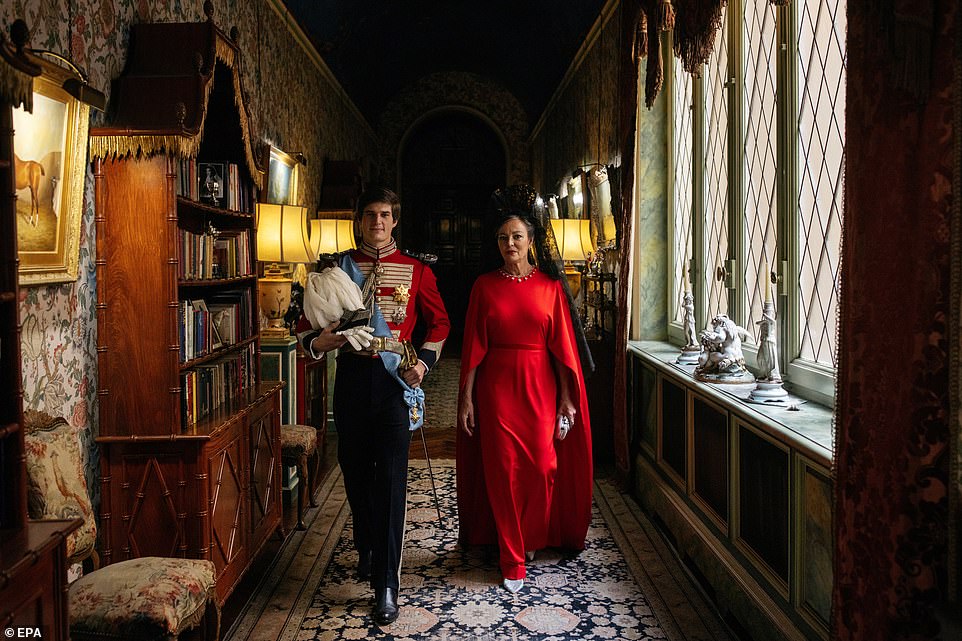 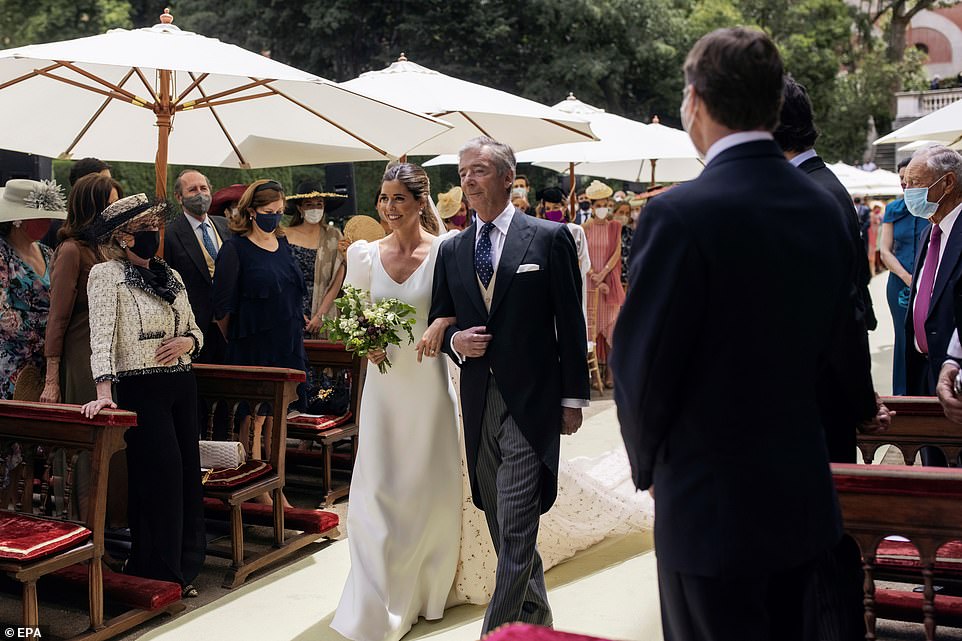 Father of the bride: Juan Carlos Corsini Munoz de Rivera walked his daughter down the aisle in the beautiful gardens 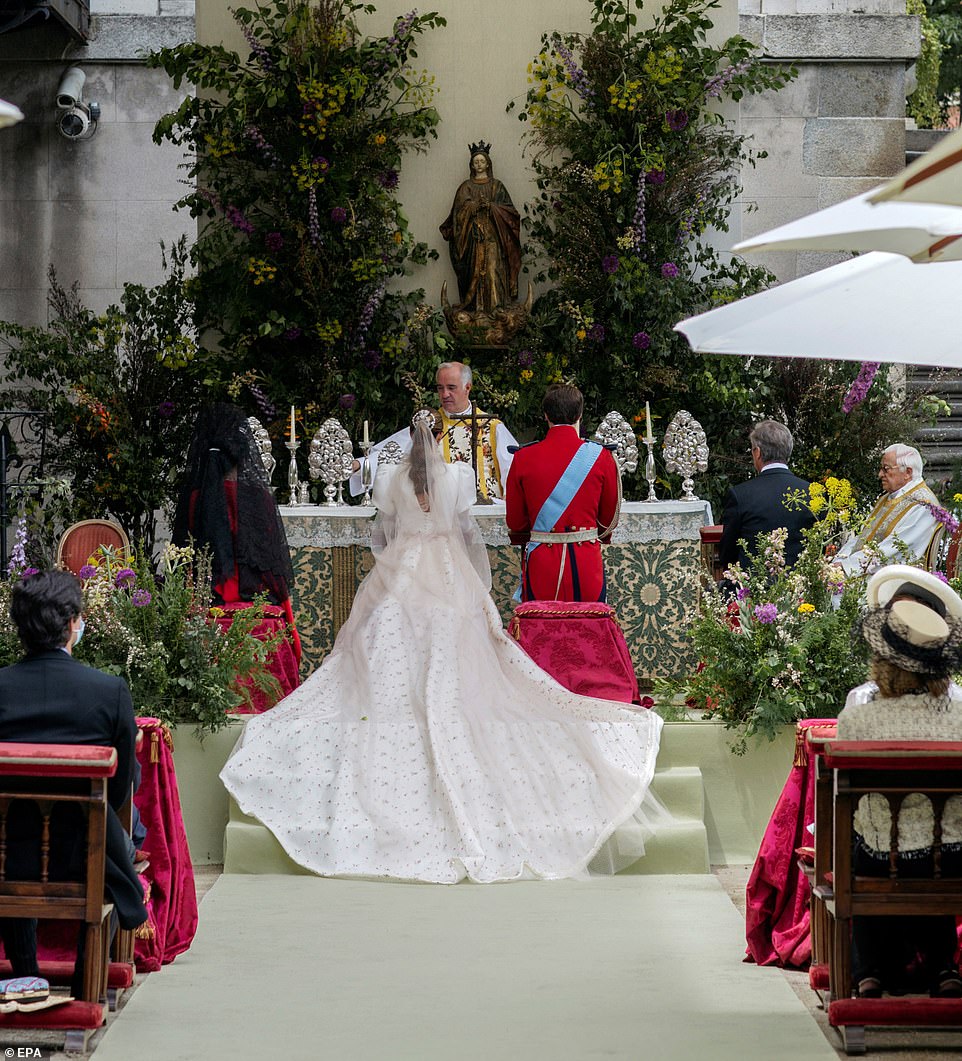 Marriage vows: The couple decided to hold the wedding outside in the gardens of the Liria Palace in Madrid 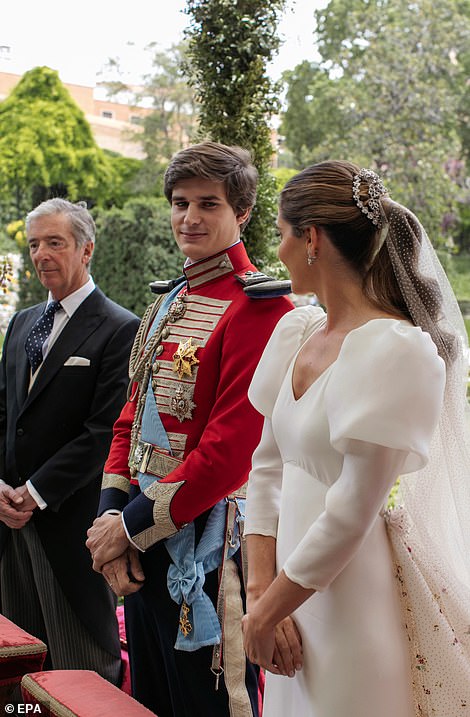 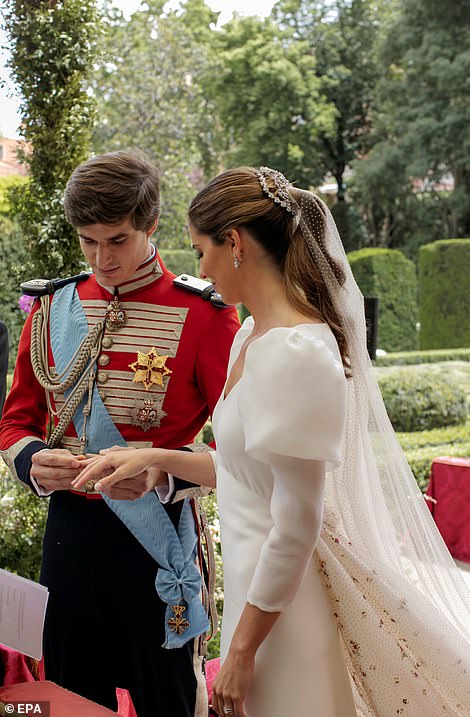 Exchanging of rings: Proud Carlos placed the wedding ring on his wife’s finger during the ceremony (right)

Spanish socialites, celebrities and other high profile individuals all turned out for the couple’s big day, which was only publicly announced last September.

The event marked the biggest society wedding of the last 18 months after scores of aristocrats across Europe were forced to put plans for their lavish nuptials on hold due to the pandemic.

Spain’s looser Covid-19 restrictions meant up to 300 guests could dance the afternoon away indoors, but it is understood the couple still kept numbers down and chose to have the ceremony outside in the Versailles gardens.

A handful of Spain’s biggest names flocked to the must-see event, including the Count’s older brother Fernando Fitz-James Stuart and his wife Sofia Palazuelo, who wed in 2018.

When the Duke of Huéscar married Ms Palazuelo at the same estate in 2018, there were 750 guests including Queen Sofia of Spain. 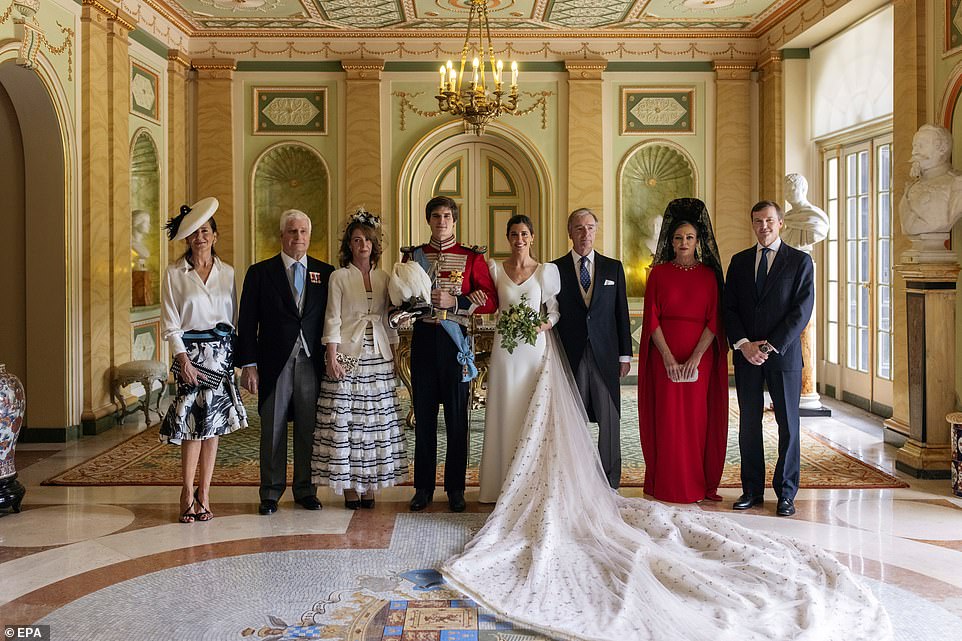 High society: The happy couple with (l-r) Monica de Lacalle, the Duke of Alba, the Duchess of Calabria, Juan Carlos Corsini, Matilde Solas and the Duke of Calabria 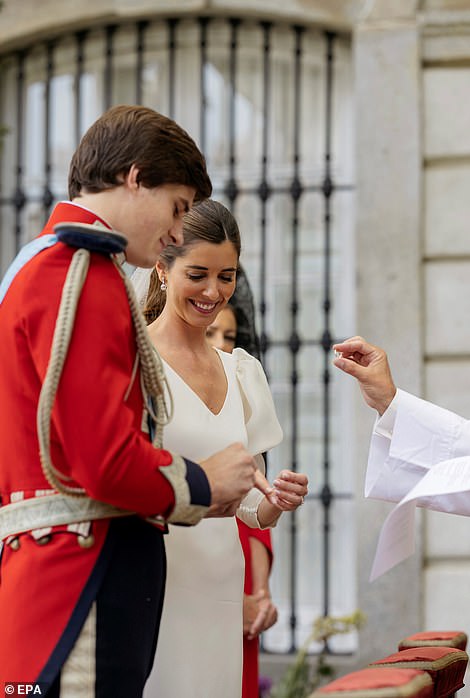 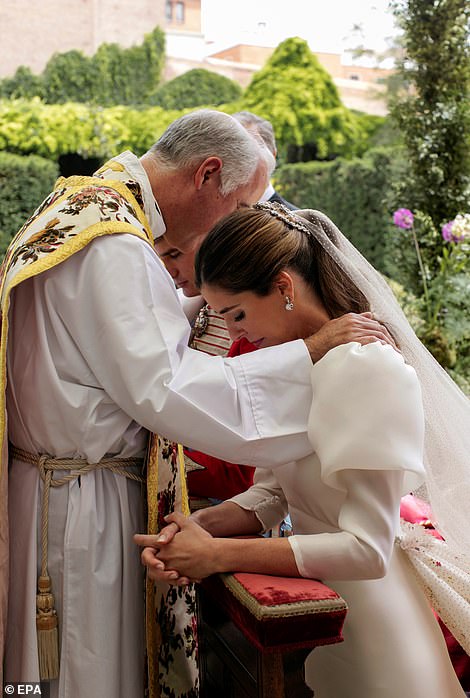 Bonded together: The marriage brings together two of Spain’s richest families. Right, the bride is blessed during the service 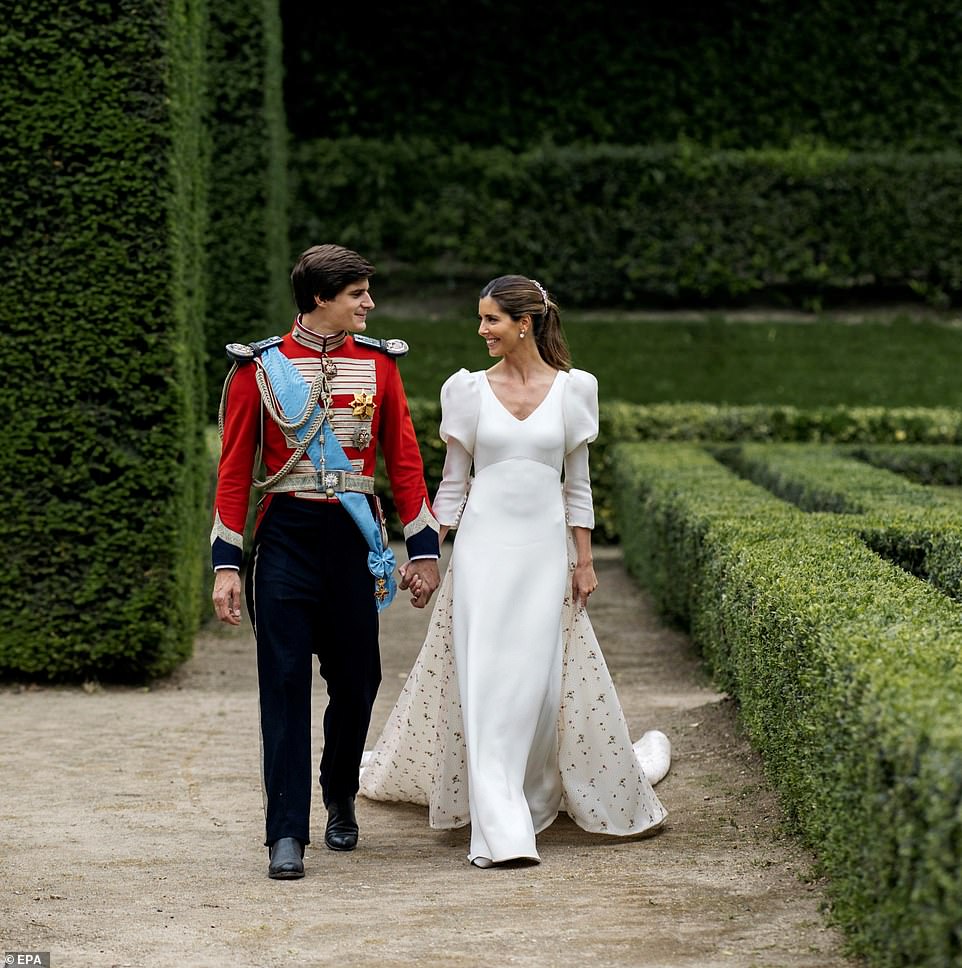 A quiet moment: The couple walk hand-in-hand through the gardens after the wedding service at the Liria Palace

Hundreds of people lined the streets and took pictures of those arriving, including the Duke’s niece, Brianda Fitz-James Stuart.

Belen’s family were also in attendance, with Alejandra Corsini and Alejandro Munoz celebrating the family affair in the Spanish capital.

The groom is the grandson of the late Duchess of Alba, or María del Rosario Cayetana Alfonsa Victoria Eugenia Francisca Fitz-James Stuart y de Silva, to give her the full name. 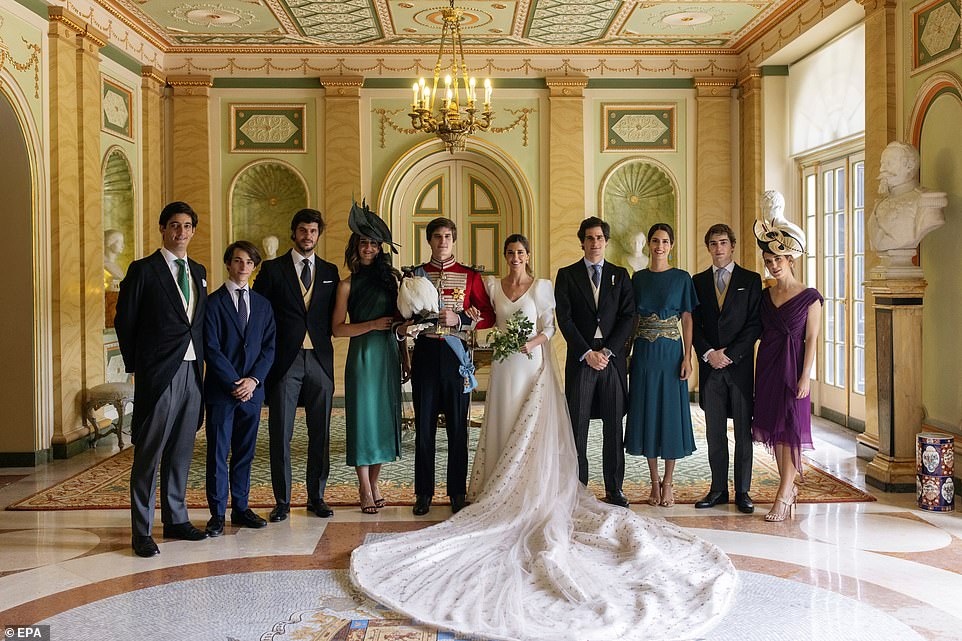 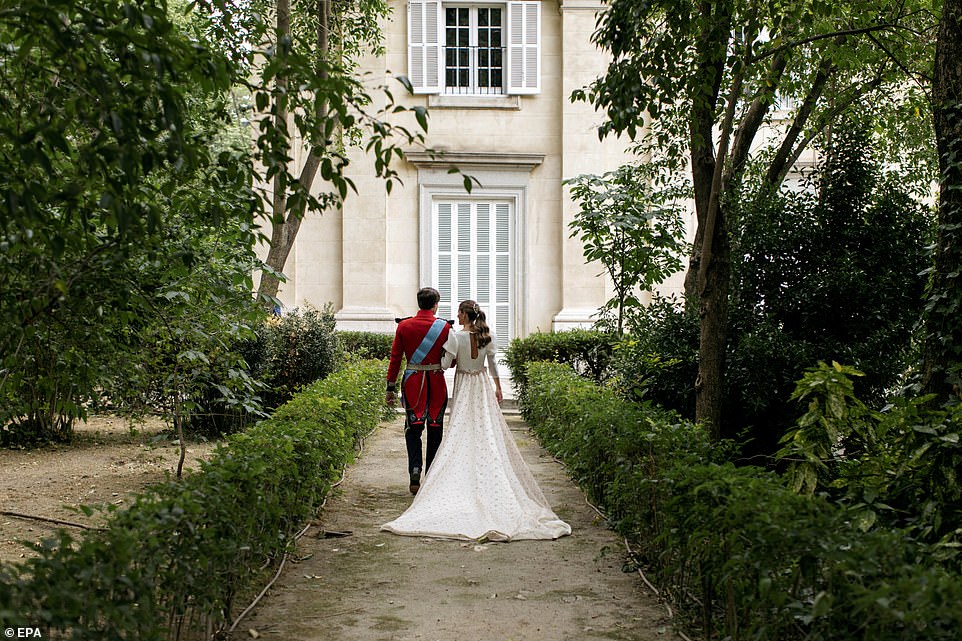 Happily ever after: The newlyweds shared these stunningly intimate photos from the wedding yesterday

Twice widowed before marrying a friend: The three husbands of Spain’s richest woman the Duchess of Alba 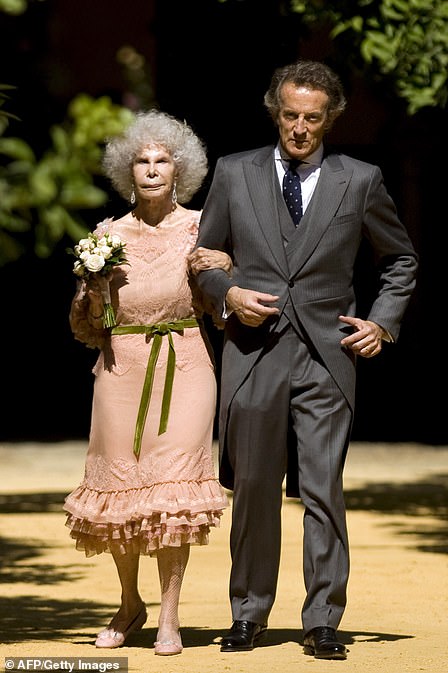 The twice-widowed duchess first married aged 21 in 1947 to fellow aristocrat Luis Martinez de Irujo in a wedding on a scale to rival that of Britain’s Princess Elizabeth later that year.

The marriage, to Don Pedro Luis Martines de Irujo, son of the Duke of Sotomayor, was described by the New York Times as ‘Spain’s most elaborate social event since the end of the monarchy’.

One thousand guests attended the formal banquet while free meals were served to another thousand needy locals.

Wearing a pearl and diamond crown, she rode to Seville Cathedral in a horse-drawn carriage with thousands of well-wishers lining the streets to cheer her. The couple had six children.

The marriage scandalised Spanish high society because she was marrying a former Jesuit priest, Jesus Aguirre, who was 11 years younger than her and had been her confessor.

Jesus Aguirre died in 2001. Her courtship with dashing civil servant Alfonso Diez then gripped the nation, aroused disapproval from Queen Sofia and was openly opposed by her six children.

Before tying the knot with 61-year-old Diez in 2011, the duchess divided her fortune between her offspring to silence their protests.

Worth an estimated £2.2billion, the Spanish duchess was one of Europe’s wealthiest aristocrats when she passed away in November 2014 at her Seville residence, Duenas Palace.

Friends, relatives and well-wishers paid their respects to the duchess, also known as ‘Cayetana’, after she died following a battle with pneumonia.

Her husband Alfonso Diez, who was 24 years her junior, is thought not to have received any of her fortune, which included an impressive property portfolio, 50,000 pieces of artwork and 18,000 rare books, after he signed a document renouncing any claim to her wealth prior to their marriage in October 2011.

Instead, the Duchess – who is a direct royal descent from King James II of England – left her entire estate to her six children, with them each receiving a palace, as well as thousands of acres of land. Her eight grandchildren are also said to have inherited a substantial chunk of her estate.

A relative of Winston Churchill, the duchess shared toys with England’s future Queen Elizabeth while living in England as a girl. 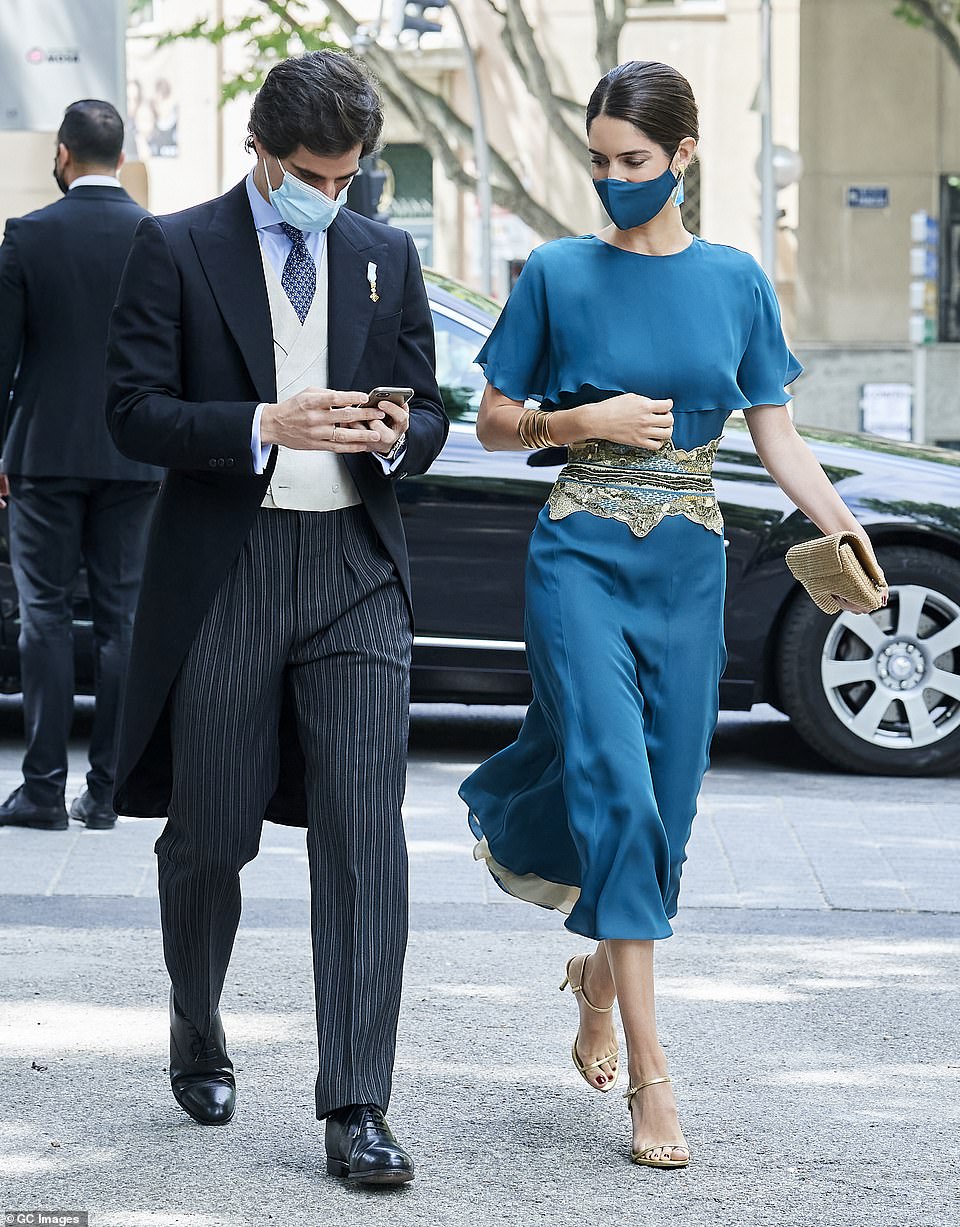 Dressed to impress: The groom’s brother the Duke of Huescar and his wife Sofia, arriving at the wedding on Saturday 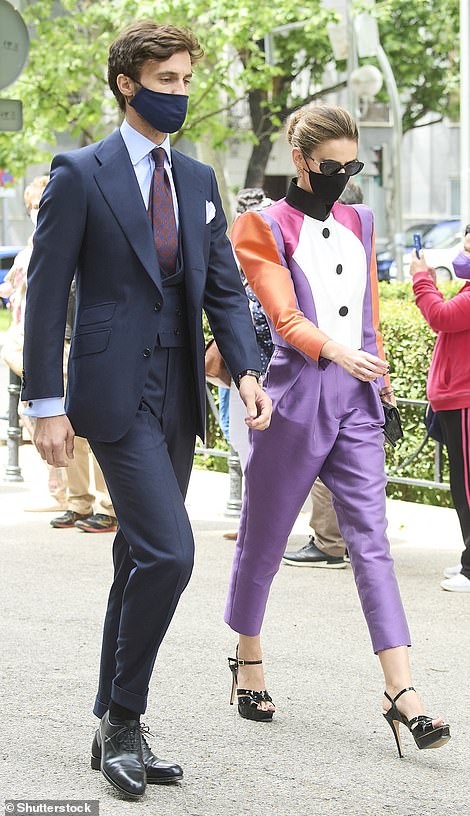 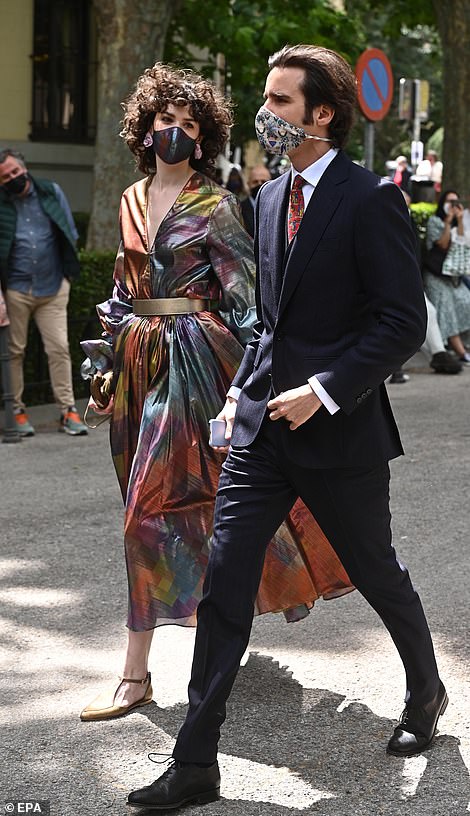 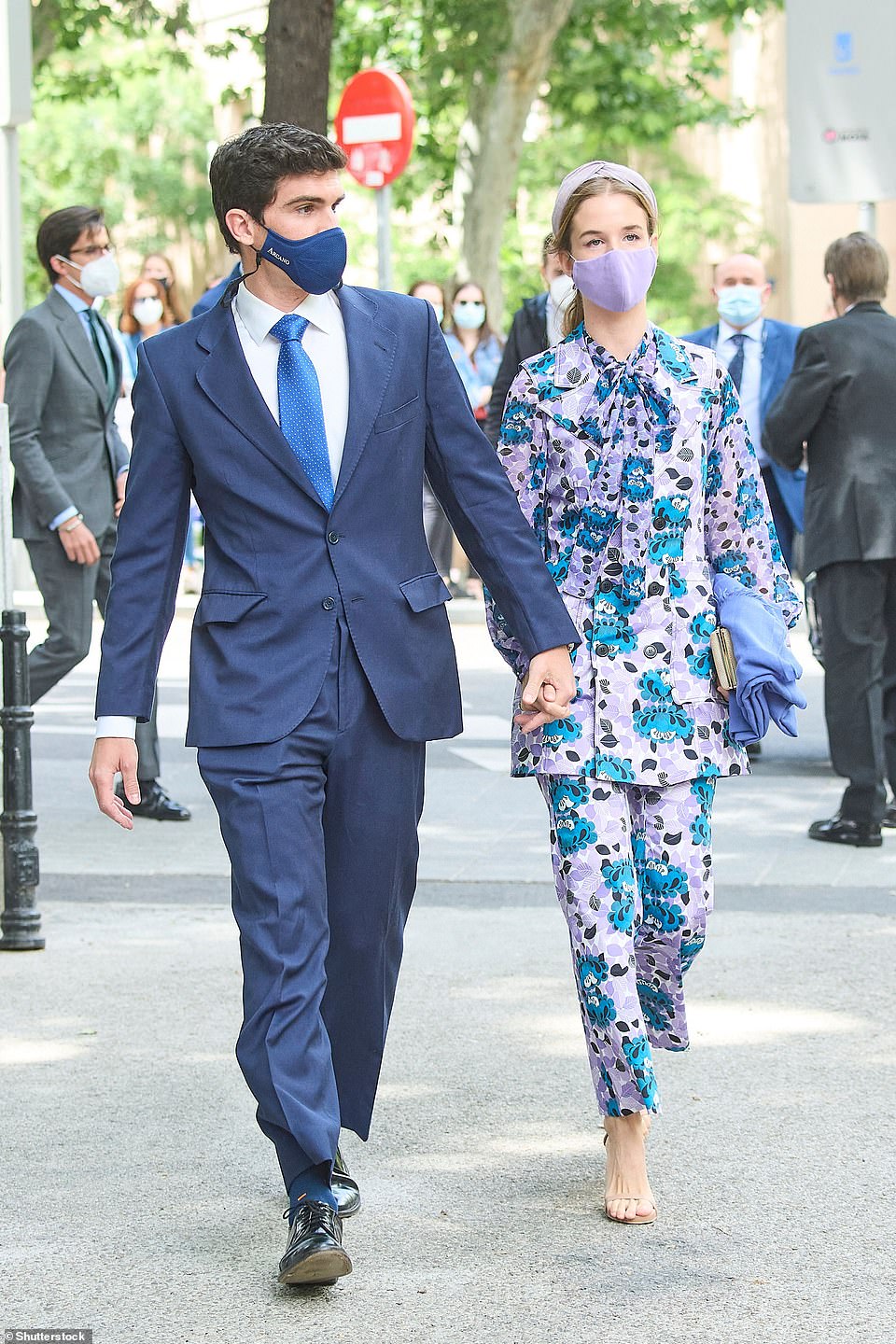 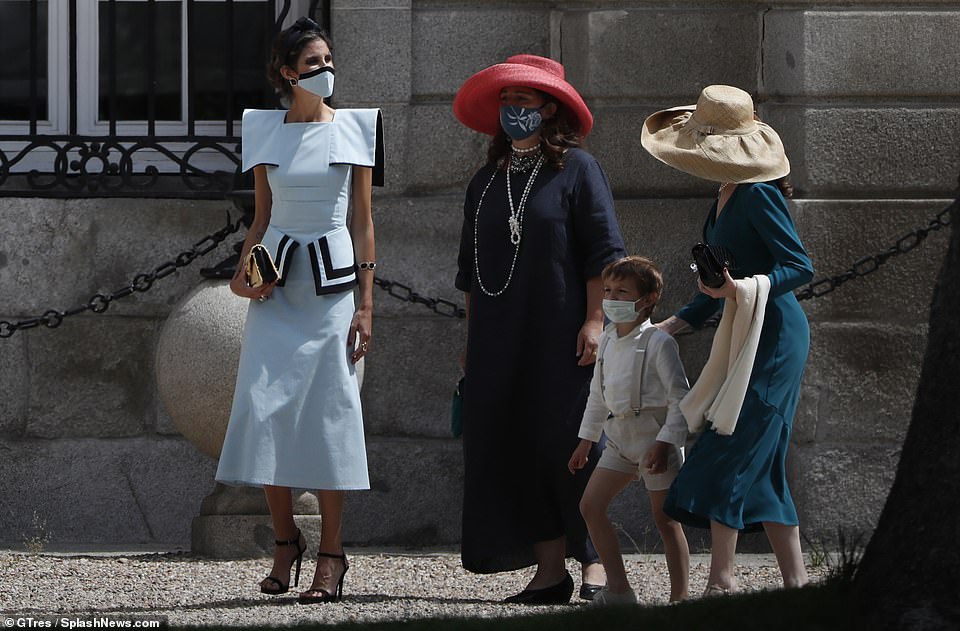 Bold: Ines Domecq (left) is pictured with other guests arriving in anticipation of the union of two of Spain’s wealthiest families 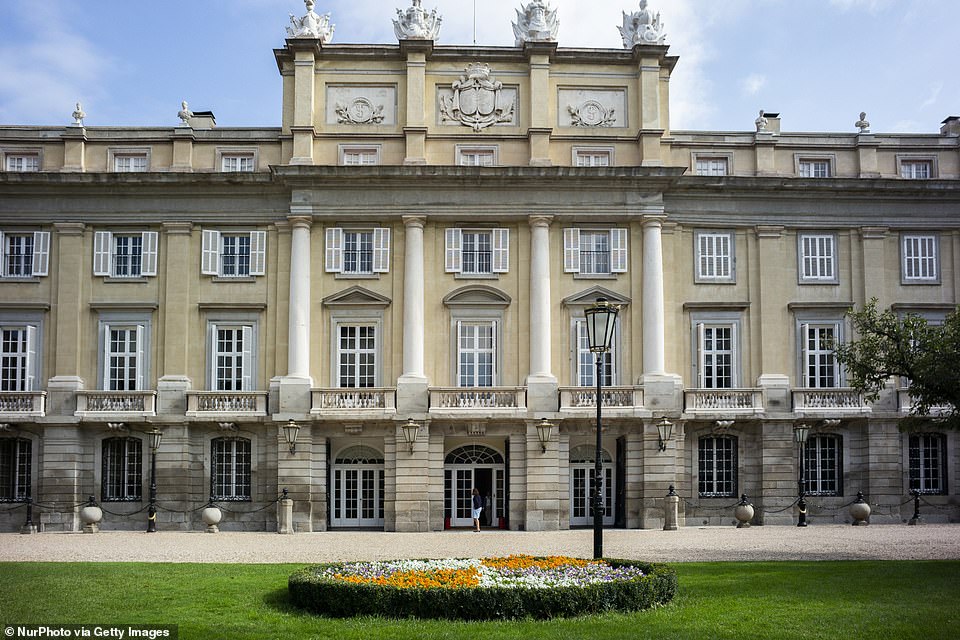