Some patients who recover from COVID-19 develop very few antibodies, a new early-stage study suggests, raising questions over the development of a vaccine and whether people get lasting immunity. 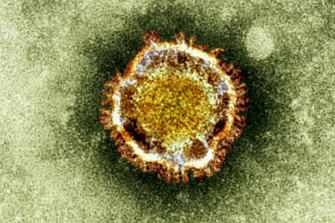 An electron microscope image of a coronavirus. part of a family of viruses that cause ailments including the common cold and SARS, which was first identified last year in the Middle East.Credit:AP

What this means for the fight against COVID-19 is unclear and experts differ on how to interpret the findings.

Some called them expected and reassuring, while others raised questions about what they mean for the development of a vaccine – or whether people who recover from the virus develop lasting immunity.

“Whether these patients were at high risk of rebound or reinfection should be explored in further studies,” the researchers said.

The team behind the new study, based at Fudan University in Shanghai, screened the blood of 175 Chinese patients who had recovered from mild forms of the illness to look for neutralising antibodies.

Their study, published this week, has not yet been subject to rigorous peer review, which means the findings need to be treated with caution. Flaws could yet emerge in the analysis and future studies may undermine its findings.

“This is not news. This is classical respiratory-virus shenanigans. The reason many of them circulate yearly is because of [their] inability to induce protective immunity,” she wrote on Twitter.

The goal of her team’s vaccine was to induce a much longer-lasting immune response, she wrote.

Neutralising antibodies are a key part of the body’s immune system. They are made in response to infection and are custom designed to stick to the infecting virus, gumming it up and stopping it attaching to human cells.

About a third of patients in the study developed antibody levels the researchers characterised as “very low”.

But all patients got over the virus and recovered just as quickly, no matter their subsequent antibody levels. That suggests the immune system is using a much wider arsenal of weapons to attack the virus, also known as SARS-CoV-2.

It is still not known if people who are infected with COVID-19 develop immunity.

There have been reports from around the world of patients who had recovered from the virus becoming reinfected, although this may be a result of errors in testing.

Some coronaviruses that infect humans – several cause common colds – do not seem to produce lasting immunity, which is why we are able to catch the cold again and again.

"Most respiratory viruses only give you a period of relative protection. I'm talking about a year or two. That's what we know about the seasonal coronaviruses," Ann Falsey of the University of Rochester Medical Centre told NPR.

On the other hand the deadly respiratory condition SARS appears to produce antibodies that last for at least a few years, studies suggest.

And a study that exposed two recovered monkeys to the virus found they could not be reinfected.