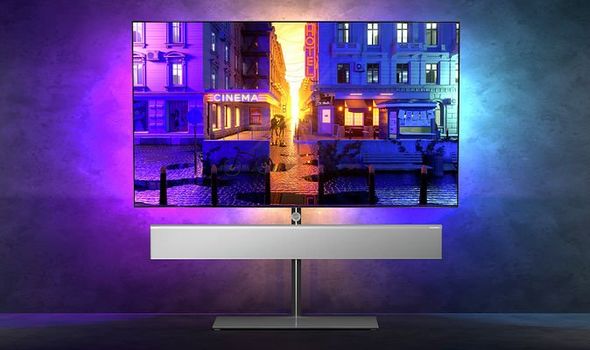 Samsung is the biggest selling Smart TV manufacturer on the planet …and has been for the past 15 years. However, Philips has come out swinging with its latest flagship telly range, the Philips OLED+ 936 and OLED+ 986.

Given these models are designed by Philips, you won’t be surprised to discover that both include Ambilight. For those who don’t know, Ambilight sees a strip of small of LEDs hidden behind the bezel around the screen. Clever software picks colours from whatever you’re watching on-screen and lets that colour bleed out onto the wall behind the telly.

There are a number of options in the main menu to tweak the intensity of the colour. You can even set the colour of the wall behind the TV in the settings, so that the AI can compensate and ensure the colour still looks accurate to what is taking place on-screen. If you have any Philips Hue smart lightbulbs around the house, everything can be synced together to set the mood for movie night.

Naturally, Philips OLED+ 936 and OLED+ 986 have the latest generation Ambilight, which can be found across all four sides of the telly.

As you’d expect, Philips OLED+ 936 and OLED+ 986 both sport a 4K Ultra HD resolution as well as a slew of HDR formats, including HDR10+ Adaptive – a first for Philips’ TVs. HDR10+ Adaptive is particularly clever as it not only the High Dynamic Range (HDR) picture signature in each scene, but it also checks your viewing circumstances and adjusts images accordingly.

To do this, Philips leverages the light sensor built into the telly to ensure whatever is on-screen is perfectly tuned to your living room, without any loss of detail or contrast. Until now, HDR has typically performed best in very dimly-lit rooms …but that’s not always how people watch their favourite movies or boxsets. Samsung announced support for HDR10+ Adaptive at the tail-end of last year, so Philips is nipping at the heels of the market-leader by bringing this functionality to the OLED+ 936 and OLED+ 986.

Both of Philip’s new models are well suited for gaming and include variable refresh-rate technology, Freesync Premium and G-Sync, with HDMI 2.1 connectivity. Dolby Atmos and HDMI eARC for soundbars and surround sound systems are found on both sets.

Both TVs are powered by Philips’ proprietary P5 processing engine, which uses AI to constantly tweak the images on-screen.

The main difference between the Philips OLED+ 936 and OLED+986 is the built-in sound system. The latter ships with an integrated system from audio brand Bowers & Wilkins. According to Philips, this system – which includes three 100mm mid/bass drivers – will result in cleaner, crisper dialogue and a much wider sound stage. For those who want some serious rumble when watching the next movie at home, there’s an optional subwoofer that can be added for a better bass response.

Unfortunately, the only detail we don’t know about these two top-of-the-line TVs right now is the price. Philips says we can expect to hear about the release date worldwide and price soon. Given that its predecessor, Philips OLED+ 935, costs £1,799 …we’d expect something similar, if not a little more given all the new features and performance boosts.