Follow all the latest action as the 43rd edition of the Ryder Cup finally gets underway at Whistling Straits.

Team Europe are defending the trophy after their triumphant victory at Le Golf National in 2018, however, they arrive on the shore of Lake Michigan as clear underdogs against one of the strongest American sides in memory. Steve Stricker’s Team USA contains eight of the world’s top 10 players and an abundance of major winners, although Europe still boast the best-ranked player of all in Jon Rahm. There remain questions, as ever, over whether the US team will be able to function as a unit, too, as Bryson DeChambeau and Brooks Koepka’s feud simmers in the background.

The pairings for the foursomes were announced by Striker and Padraig Harrington at the opening ceremony last night and the morning’s play will begin with a tantalising match-up between the formidable US pairing of Jordan Spieth & Justin Thomas against Spanish duo Jon Rahm & Sergio Garcia. The second match sees Dustin Johnson & Open champion Collin Morikawa take on Viktor Hovland & Paul Casey before Koepka & Daniel Berger challenge Lee Westwood & Matt Fitzpatrick. The final match of the first session pits Patrick Cantlay & Xander Schauffele against Europe’s heartbeat of Ian Poulter & Rory McIlory. Follow all the latest updates below: 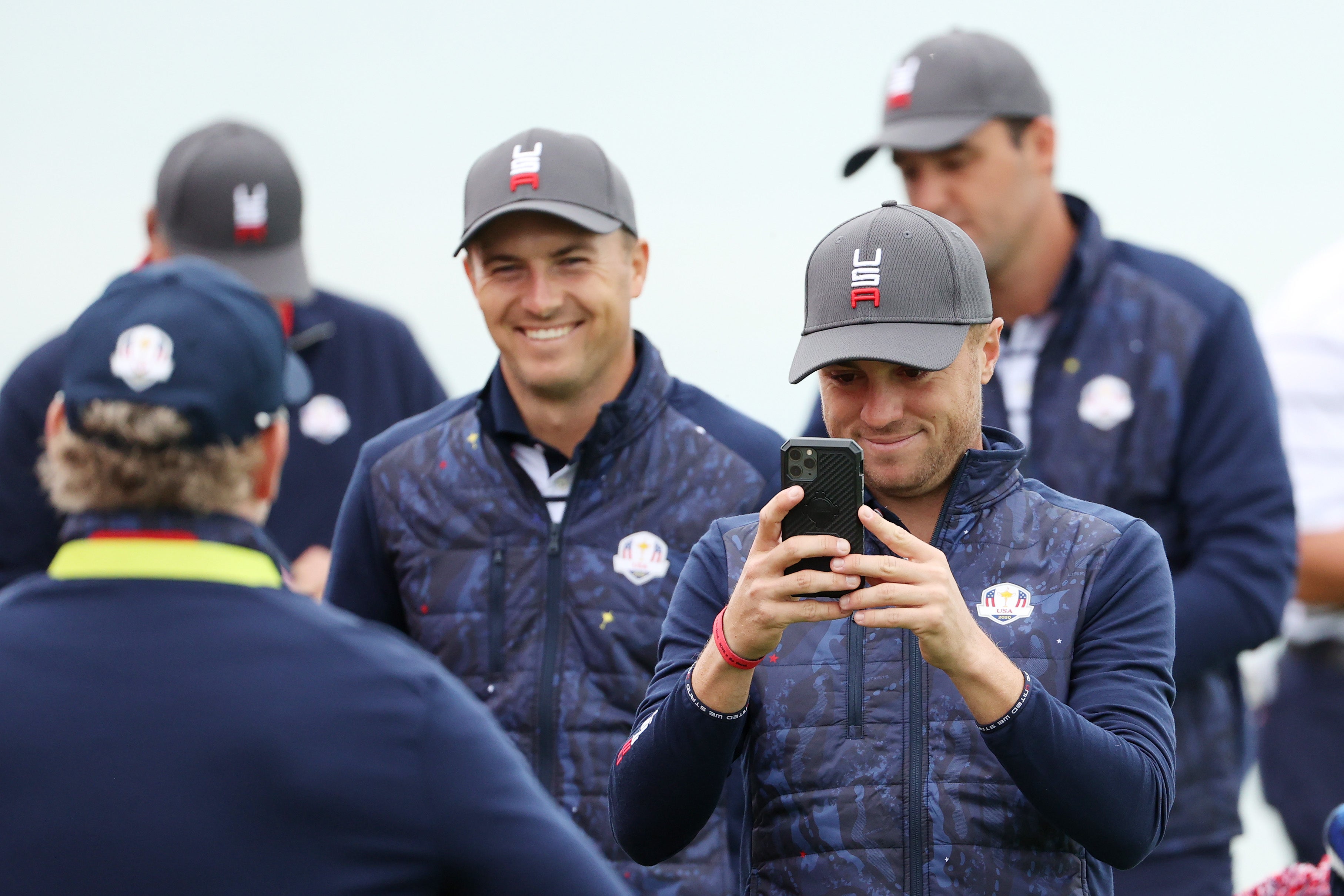 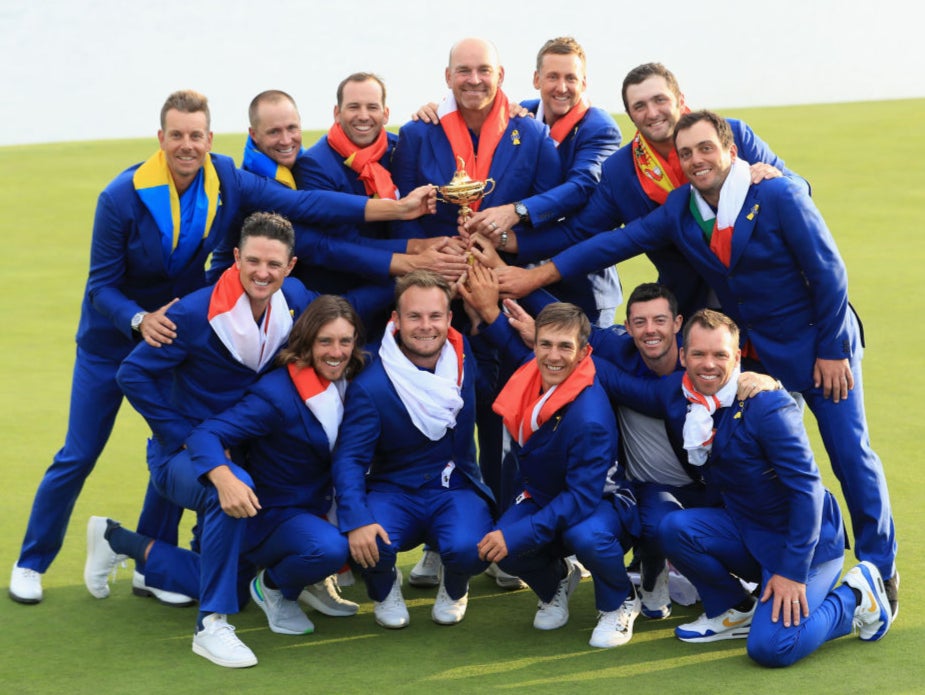 Welcome to the 43rd Ryder Cup

Welcome to The Independent’s live coverage as the 43rd Ryder Cup officially begins at Whistling Straits.

Team Europe are attempting to pull off another famous upset on home soil but are faced by one of the strongest American sides in recent memory, even if questions over their cohesive spirit remain firmly at the forefront.

The opening foursomes session will begin at just after 1pm (BST), with captains Padraig Harrington and Steve Stricker naming their line-ups at the opening ceremony last night.

All eyes will be on the electric opening match-up between Jordan Spieth & Justin Thomas vs Jon Rahm & Sergio Garcia while the closing game is no less exciting as Xander Schauffele & Patrick Cantlay take on Ian Poulter & Rory McIlroy.

Tyrrell Hatton on US fans

Tyrrell Hatton expects to be needled by U.S. fans at the Ryder Cup but the fiery Englishman said on Thursday he will try to keep a lid on his emotions at Whistling Straits for the sake of his European team mates.

Hatton, who has said his name would be “Headcase Hatton” if he was a DJ, can struggle to control his temper when things go awry on the course, bending and breaking clubs in frustration.

But the 29-year-old, who snapped a pitching wedge in half at the British Open in July, said being part of a team could help him avoid such blow-ups.

“For me personally, I can’t really do that this week because it’s almost not fair on your partner,” Hatton told reporters.

“Like, you don’t want to then almost essentially bring them down and that’s not what we’re about. That’s not what you do as a team. You’re in it together.”

Hatton, who made his Ryder Cup debut in 2018, acknowledged that some home fans might try to get under his skin in Wisconsin but said he was more critical of himself than any spectator could be.

“As the away team, I think we all expect a little bit of — well, not really any cheers. So we all take it in our stride and see how we go.”

Europe are defending champions after winning in 2018 but the players will not have the usual army of fans to support them this year due to COVID-19 travel restrictions.

The competition begins later on Friday.

Europe captain Padraig Harrington hailed his side’s strength in depth after leaving Tommy Fleetwood and Shane Lowry out of the opening session of the 43rd Ryder Cup.

Fleetwood won all four of his matches together with Francesco Molinari in Paris, but with the Italian not making the team for Whistling Straits three years later, Fleetwood joined former Open champion Lowry in sitting out Friday’s foursomes.

“That says a lot about our team that he is comfortable after going 4-0 and can look around his team and be confident that there’s other people that are taking up that strain,” Harrington said of Fleetwood.

“He’s prepared to sit there and wait his chance in the afternoon, which really just sums up our team how balanced it is and the understanding of the players that they have to give other people their opportunity, as well.

“I want every player on my team absolutely dying to play every match. But I want them to also understand that there’s other people in the team, they have to step aside, and they have done that brilliantly.”

World number one Jon Rahm will be sent out in the first match for the second Ryder Cup in succession, the US Open champion forming an all-Spanish pairing with Sergio Garcia against Justin Thomas and Jordan Spieth, who won three of their four matches together in Paris.

Norway’s Viktor Hovland is the only European rookie in action on Friday morning as he joined Paul Casey against Dustin Johnson and Open champion Collin Morikawa, with Lee Westwood and Matt Fitzpatrick taking on Brooks Koepka and Daniel Berger.

The final match will see Rory McIlroy and Ian Poulter, who first played together at Medinah in 2012, up against FedEx Cup winner Patrick Cantlay and Olympic champion Xander Schauffele.

Harrington admitted Friday’s pairings had been in his mind “for months” after acknowledging that the duos had played just once together in practice this week.

“We knew our partnerships well in advance and you don’t want to get bored playing with a guy,” Harrington said. “They did have a trial at foursomes but I just did not want them to overdo it.

“You want to turn up on Friday with a bit of freshness and excitement.”

US captain Steve Stricker said he had not tried to work out which European players would be paired together, but had expected Rahm and McIlroy to feature in the first and fourth matches.

“I feel great about our pairings, some teams that have played together over the years, whether in the Ryder Cup or Presidents Cup,” Stricker said. “We are really excited about how these guys are playing and the order they are going out.”

Former US Open champion Bryson DeChambeau was among the players to sit out the opening session but Stricker said no players had expressed any disappointment about his plans.

“These guys have been incredible,” he added. “I can’t stress that enough. It’s about the communication we have had, being upfront with them and letting them know what we are thinking so there are no curveballs.

“We have heard it multiple times from all the players, if you want to play me once or all five, that’s up to you, just so we can try to win this cup.”

Already 15 years a professional, Bernd Wiesberger is nobody’s idea of a stereotypical Ryder Cup rookie. He has seen the winner’s circle on several occasions and lost momentum to a debilitating surgery, he’s long made friends with those on the European team but seen chance become his enemy when trying to join them. He may be unfamiliar to most at home, the quiet face in the corner of team pictures, but that makes the steeled conviction required to mark Padraig Harrington’s team, on undeniable and perseverant merit, all the more remarkable.

That virtue of anonymity is all about to change this week at Whistling Straits when Wiesberger becomes the first Austrian in history to play in the Ryder Cup. There will be no avoiding the glare of attention and the unimaginable strains of pressure that sizzle through the joints of every player to step on that first tee. “I don’t think anything can prepare you for it,” he freely admits, but he’s also determined to embrace it. The 35-year-old might not shout it from the hilltop, but he has seen most of what golf has to offer from that vantage. Nothing else, though, is quite like this. “It’s going to be a life-changing experience,” he says. “Nothing is like the magnitude of the Ryder Cup. There are nerves, but first and foremost there is immense pride. I’ll really try to let that sink in.” 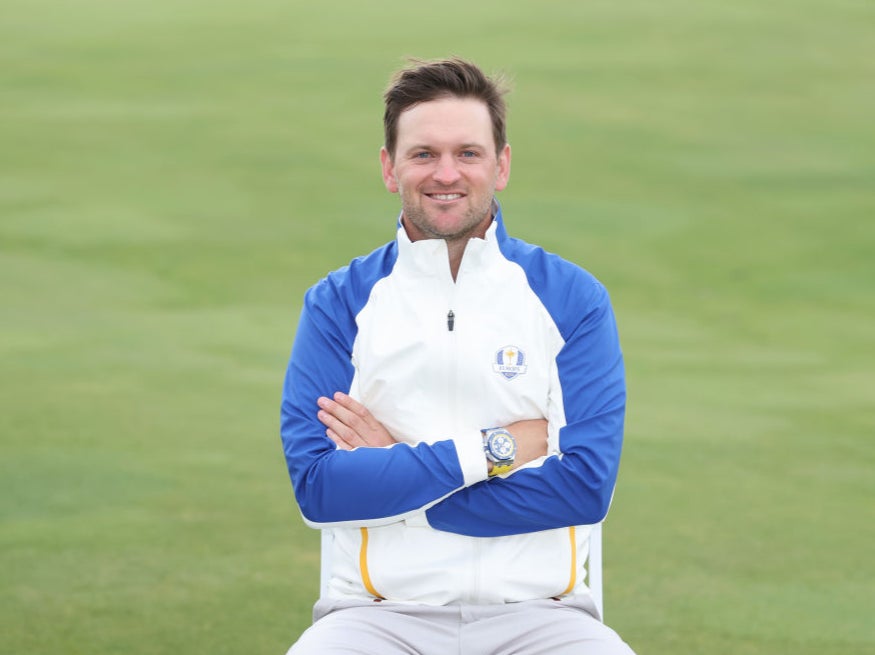 Bernd Wiesberger: ‘The Ryder Cup will be a life-changing experience’

Exclusive interview: The Austrian regards himself as a quiet character but believes achieving his long-held dream of reaching the Ryder Cup will bring out another side to him in the locker room and on the course