When Henry VIII dropped off the twig, he left behind three children in line for the throne. All three of them would get a shot on it – last, longest and most famously the young Elizabeth (Alicia von Rittberg).

Don’t expect Becoming Elizabeth to be one of those glossy, romantic re-imaginings of things. There’s a fair bit of grit here, and if the occasionally shrill piano in the score puts you in mind of Succession you’re on the right track. Young Elizabeth is about to find herself in a nest of vipers every bit as colourful and ruthless as Logan Roy’s offspring. 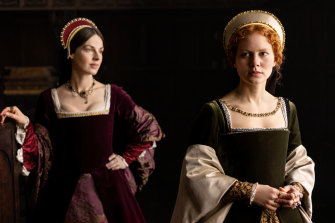 But where Succession leans into dark humour, Becoming Elizabeth leans into darkness in general, its chiaroscuro interiors adding weight to an atmosphere thick with foreboding and unwholesomeness.

As the young Edward (Oliver Zetterstrom) is plonked on the throne, young Elizabeth is shuffled off to live with Henry’s widow, Catherine Parr (Jessica Raine), and her lecherous lover, Thomas Seymour (Tom Cullen). The brazen Seymour is immediately flirting outrageously with the demure Elizabeth in front of the whole household, and then actively working to seduce her – hands-on.

It’s unsettling stuff, even more so when you remember that the real Elizabeth was just 15 (von Rittberg was 27 at the time of filming). Series creator Anya Reiss writes Seymour big, and Cullen jumps into the role with both feet, portraying a man whose ebulliently aggressive indiscretion almost amounts to a death wish. 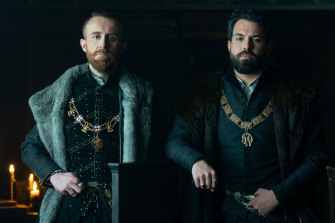 John Heffernan as the Duke of Somerset and Tom Cullen as Thomas Seymour in Becoming Elizabeth.Credit:Stan

Raine too seems to relish the wickedness of her ambitious, manipulative character, but she also gives Catherine a more vulnerable side when it comes to Seymour’s lust for Elizabeth.

Catherine and Seymour put themselves in the driver’s seat in the early episodes, but von Rittburg gives a poised, nuanced performance as Elizabeth, underlaying the princess’s sheltered inexperience with curiosity, daring and a nascent steel of which she will soon be in need.

With little Edward looking like a junior Joffrey from Game of Thrones with his blonde hair, piercing blue eyes and cruelty-tinged volatility, the last royal sibling is the deeply pained Princess Mary (Romola Garai), a devout Catholic in a lethally Protestant milieu – but not quite so isolated a figure as she first seems.

There’s a lot going on, but the writing is as assured as it is playful, and the sets and costumes are handsome and tactile. The casting is particularly astute, not least in the choice of Shakespeare and Marlowe veteran John Heffernan for the crucial role of the Duke of Somerset, Lord Protector of the young King Edward and older brother of the awful Thomas Seymour. It’s a Tudor feast as substantial as a leg of beef. 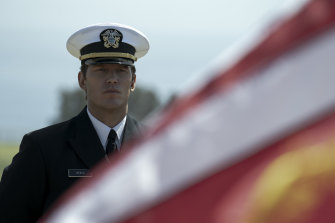 Chris Pratt is a former US Navy SEAL in the action-packed conspiracy drama series The Terminal List.Credit:Amazon Prime

The bullets fly in this action-packed international military-conspiracy drama series based on the novel by former US Navy SEAL Jack Carr. It stars Chris Pratt as US Navy SEAL James Reece, who leads his team into Syria on a mission that ends in bloody disaster. Back home in the States, concussed, traumatised and being grilled by Navy investigators about what happened, he learns that the recordings of his team’s radio communications don’t match his recollection of events.

Reece’s immediate conclusion: some unknown enemy has replaced the real recordings with fakes. Oh, and they’ve also sent assassins to kill him. Might there be a whiff of Jacob’s Ladder about all this? Is Reece just going mad?

Perhaps he’ll find out with the aid of the friendly US defence secretary (Jeanne Tripplehorn) and a reporter (Constance Wu) who has the kind of unlimited access available to only the most fictional of journalists. With director Antoine Fuqua (Training Day) at the helm for the first episode, the series arrives with impact, intrigue and interesting tradecraft, even if Pratt isn’t a terribly captivating lead.

The Art of Incarceration
Netflix, from Sunday 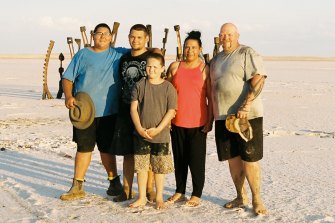 The Wirramanda Family in the documentary The Art of Incarceration.Credit:Netflix

This affecting documentary shows the power of art to change the lives of indigenous people in prison and improve their prospects upon release. Director Alex Siddons takes us inside the Fulham Correctional Centre in Sale, where Aboriginal inmates are able to make art and sell their work via The Torch (thetorch.org.au). The art is striking, and the inmates open and insightful about their backgrounds, their crimes and their challenges. As some of the men are released there are hopeful signs and a terrible tragedy. 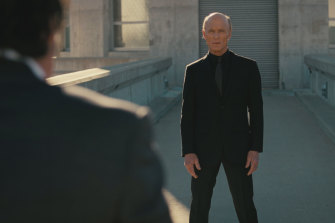 Pure, distilled malevolence: Ed Harris as the Man in Black in season 4 of Westworld.Credit:HBO/Binge

Westworld has returned in assured and brilliant style. The Man in Black (Ed Harris) is pure, distilled malevolence in a straw fedora, while the second episode reveals that he has seriously chilling back-up in the form of an old, familiar face. There’s great chemistry between Thandiwe Newton and Aaron Paul as the uncomfortably yoked Maeve and Caleb, and a mystery in Evan Rachel Wood’s seemingly new character. Just when you think you have a handle on what’s happening, a big twist shows that you don’t. 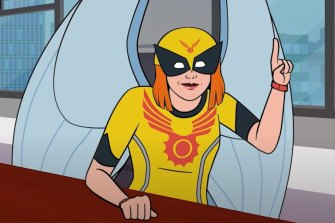 Birdgirl is a wacky spinoff of the cult cartoon Harvey Birdman, Attorney at Law.

There’s a manic energy to this wacky spin-off from the cult cartoon Harvey Birdman, Attorney at Law (itself a spin-off from the 1960s Hanna-Barbera Birdman cartoon). Impulsive superhero Birdgirl has inherited a giant law firm and industrial conglomerate, and she has her hands full dealing with a seriously oddball staff, her unresolved feelings about her father and the need to invest in new products. Such as a line of sinister talking teddy bears that offer rudimentary psychotherapy at inconvenient times. Enjoyably silly. 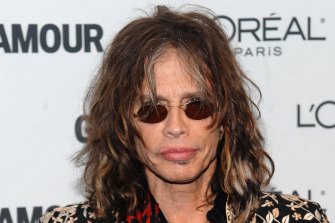 Steven Tyler is one of several heavy-metal rockers featured in The Decline of Western Civilization.Credit:AP/Evan Agostini

Docplay has all three of Penelope Spheeris’s Decline documentaries. Viewers who sheepishly recall enjoying the hair-metal bands of the ’80s will find this second landmark the most captivating. In Los Angeles in 1987 and 1988, Spheeris finds a new generation of ambitious metal bands mostly unencumbered by anything resembling self-doubt or a progressive attitude towards women. Spheeris has a keen eye for absurdity, and her interviews with older, wiser rockers underline the fact that you can’t put an old head on young shoulders.

* Stan is owned by Nine, the owner of this masthead.

Find out the next TV, streaming series and movies to add to your must-sees. Get The Watchlist delivered every Thursday.