As Prince Harry and his family adjust to their lives outside the royal family bubble, he’s made a lot of efforts to be candid about his mental health story — particularly how he’s sought help and support for himself and his wife, Meghan Markle, and advocates for mental health care for other people struggling. 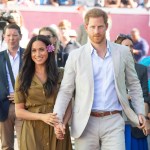 In clips from his Apple TV+ show with Oprah, The Me You Can’t See, Harry has shed new light on what he experienced in his childhood and adolescence. He even shared an example of the Eye Movement Desensitization and Reprocessing (EMDR) therapy he underwent, giving the cameras a glimpse of the process.

“I wasn’t in an environment where it was encouraged to talk about it either, that was sort of, like, squashed,” Harry said. “Every time I put a suit and tie on and having to do the role and sort of like go, ‘Let’s go.’ Before I even left the house, I was pouring with sweat, my heart rate was … I was in fight-or-flight mode. Panic attacks, severe anxiety — so 28 to probably 32 was a nightmare time in my life, freaking out.”

EDMR, according to the American Psychological Association (APA), is a form of therapy designed to help individuals struggling with post-traumatic stress disorder (PTSD) with the goal of a “reduction in the vividness and emotion associated with trauma memories.”

“Unlike other treatments that focus on directly altering the emotions, thoughts and responses resulting from traumatic experiences, EMDR therapy focuses directly on the memory, and is intended to change the way that the memory is stored in the brain, thus reducing and eliminating the problematic symptoms,” per the APA. “During EMDR therapy, clinical observations suggest that an accelerated learning process is stimulated by EMDR’s standardized procedures, which incorporate the use of eye movements and other forms of rhythmic left-right (bilateral) stimulation (e.g., tones or taps). While clients briefly focus on the trauma memory and simultaneously experience bilateral stimulation (BLS), the vividness and emotion of the memory are reduced.”

“People who are hurt, understandably hurt, from their upbringing, their environment, what’s happened to them, what they’ve been exposed to, what they’ve seen — whatever it is — if you don’t transform, if you don’t process it, then it ends up coming out and in all sorts of different ways and you can’t control.”

Finally getting the help he needs

Harry said that overwhelmingly he found that his larger royal family wasn’t equipped to help him and Meghan as they struggled: “Family members have said ‘Just play the game and your life will be easier,’ but I have a hell of a lot of my mum in me. I feel as though I am outside of the system, but I’m still stuck there. The only way to free yourself and break out to tell the truth,” he says, later adding, “If your parents don’t want to talk about it, and your friends can’t remind you about it, there’s no reason why you shouldn’t say, ‘Hang on a second, I may be the product of my upbringing.’

But he also says he’s made a lot of progress in better understanding his fears and the traumas (mostly connected to how he was raised and how suddenly and traumatically he lost his mom) and that going to therapy for four years has given him a better perspective.

“I am one of the first people to recognize that firstly, I had a fear of — when I first went to therapy — a fear of losing,” he said. “Four years of therapy for an individual that never thought that they would ever need or do therapy is … that’s a long time. I wasn’t in an environment where it was encouraged to talk about it either. That was sort of, like, squashed.”

Before you go, check out our favorite and some of the most affordable mental health apps: