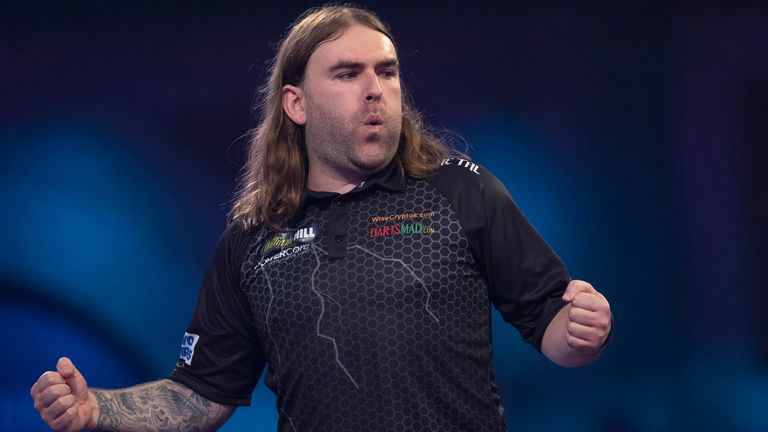 Ryan Searle was in sparkling form as he floated around a ton average across the night to claim Group Six in the PDC Home Tour.

World No 40 ‘Heavy Metal’ conceded just one leg to see off Andy Boulton in his first game, before fending off 2018 European Championship winner James Wade.

The win was confirmed in impressive style with victory over Andy Gray, who lost all three of his matches on the night, while it was Boulton who followed him in second.

Wade cruised to an opening 5-2 win over Gray with a 94 average having produced a superb 147 checkout to go two legs clear early on.

Searle, playing in the man cave at the end of his garden, began the evening in style with a 5-1 victory over Boulton following a 13-dart break in the second leg and a match-winning 120 checkout.

Game three saw Gray’s chances of winning the group ended as he was beaten 5-2 by Boulton, who had finished with a 100.9 average.

Searle’s momentum carried into game four when he overcame Wade 5-3 after firing a maximum followed by a stunning 155 checkout to win the second leg in 12 darts.

Not even the mid-match collapse of Gray’s camera tripod could halt Searle as he marched towards a 5-2 win to seal Group Six honours.

Boulton closed the night with a 5-0 white-wash of Wade to earn second place in the group, with some 80 checkouts on the bullseye leaving him wondering what could have been had he mustered that kind of finishing earlier on.

Thursday’s action takes us to the Jelle Klaasen household as the 2006 BDO World Champion takes on Gabriel Clemens, Ryan Meikle and Gavin Carlin.

World Champion and world No 2 Peter Wright was the first big name to taste defeat on the opening night, before world No 3 Gerwyn Price was also beaten on Saturday. Dave Chisnall claimed Group Three on Sunday night, while Geert Nentjes and Nick Kenny delivered perfect records to clinch Groups Four and Five, respectively.