Travellers under quarantine in hotels across Sydney say they are anxious about access to fresh air, laundry services and receiving fresh meals.

About 3000 international arrivals at Sydney Airport were greeted by police and defence force personnel at the terminal on Sunday, checked for fever, and bussed to hotels across the city where they will remain in isolation for 14 days, unable to step outside their rooms. In some instances, hotel keys have been confiscated. 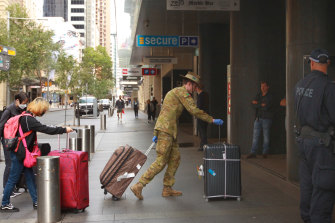 Travellers have been sent to hotels for a two-week quarantine period.Credit:Jacky Ghossein

While the prospect of being put up in a hotel with a $90 daily room service tab seemed like a good deal for some, others have expressed worry about the quality of the meals on offer for the price, the lack of fresh air, and the cleanliness of rooms – which will not be serviced.

Melbourne woman Catherine*, 38, is among the arrivals quarantined at the Hyatt Regency after flying into Sydney from London on Sunday morning, following Friday's announcement by Scott Morrison to quarantine all international arrivals after midnight Saturday.

Catherine said while the hotel is "a fancy address and very central" with a "grandiose entrance", her room was actually "very dusty and the window is sealed so [there is] no chance of fresh air".

Without cooking or laundry facilities, she said the hotel might be nice for a tourist but was not set up to be "lived in" for two weeks.

While the $90 room service provision appears generous, the options are limited and expensive. Catherine's dinner on Sunday, the first thing she had eaten since the plane, was a steak and salad that cost $51. "It doesn't take long to spend that money," she said.

"Obviously healthy food is crucial for preventing illness and recovering quickly from any potential infections, so lack of fresh fruit and veg and lack of variety are concerning."

Other arrivals had similar complaints, with one mother tweeting a photo of a "self care isolation pack" containing toiletries and teabags that she said "doesn't really help feed my toddler".

To protect hotel staff, those quarantined will not have any physical contact with them, and meals and fresh linen are to be dropped outside their door.

Without in-room laundry facilities, a note from the hotel indicated Catherine would be charged for laundering individual items. But she wasn't sure that would happen given concerns about transmission.

"Some people don’t have changes of clothes for the next two weeks," she said. "It's not clear if we'll be able to get any laundry done at all".

NSW Police Commissioner Mick Fuller said hotel staff "should be properly briefed and they should have the PPE [personal protection equipment] that they need," but that "the virus does not survive the most basic cleaning."

He acknowledged "there will be people who are unhappy with the bed, the pillow, the heater, dinner and all those type of things".

But he said the facilities "are five-star hotels" and authorities are "doing everything we can to make it comfortable".

"There are people after the bushfires still living in tents and caravans," Commissioner Fuller said.

Travellers stuck in rooms since Thursday

The lack of fresh air has prompted complaints from other travellers who found themselves locked in their hotel rooms after arriving on Thursday, prior to the new rule.

Darwin-based businessman Sakib Awan and his wife arrived in Sydney on a charter flight from Hawaii at 1.30am on Thursday after being caught on the Norwegian Jewel cruise ship, which was turned away from a number of Pacific ports.

Mr Awan was handed paperwork on arrival that indicated he was allowed to transit interstate, providing it was within 24 hours. But after spending the night at the Swissotel in Sydney's CBD, he said he discovered his door was under guard and he was not allowed to leave.

Mr Awan said on Sunday he is "resigned" to the fact that he will be quarantined in Sydney for the remainder of the fortnight.

While he said he "fully supports" the government's decision, he said without access to fresh air he felt like he was "in detention".

"Fresh air is everybody’s right, you get that even in prison," Mr Awan said.

Along with some fresh air, Mr Awan said he just wants an assurance he and his wife will not be forced into quarantine again after they return home to Darwin.