The perfect isolation treat for the whole family: Mum keeps her kids happy in lockdown with a foolproof four-ingredient recipe for vanilla bites

A mother entertaining her children in isolation has discovered a simple way to bake bite-sized vanilla pastries in an air fryer with four basic ingredients in less than 10 minutes.

Sydney mum Adela Lovrencic shared her recipe in a Facebook group on Thursday, showing others how to make the dessert with two sheets of ready-made puff pastry, milk, icing sugar and a packet of instant vanilla pudding – all of which can be bought for just $6.85 from Coles or Woolworths. 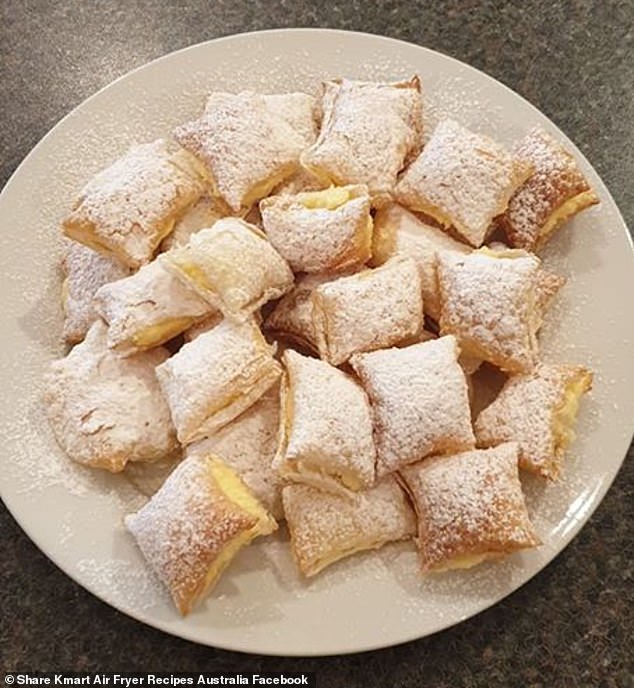 Sydney mother Adela Lovrencic made these bite-size vanilla pastries in an air fryer in 10 minutes from $6.85 worth of ingredients

Everything you need to bake DIY vanilla bites

(All available at Woolworths)

To start, Ms Lovrencic cut the dough into small chunks suitable for kids and cooked them in an air fryer at 180 degrees for roughly six minutes until golden and flaky.

‘Spread them out in one layer and make sure they don’t touch the edges of the air fryer,’ she said.

While the pastry crisped, she whisked 700ml of milk into Cottee’s instant vanilla pudding powder for one minute to create a thick, creamy custard.

Once cooled, she sliced each pastry shell in half and loaded one side with vanilla custard, sprinkling icing sugar over the top for decoration and extra sweetness.

The pastries can be filled with any condiments like Nutella, jam, traditional custard or pureed banana.

Her recipe has been ‘liked’ by more than 1,200 Australians experimenting with baking and creative cookery to pass time as the coronavirus lockdown continues nationwide.

‘This has been a family favourite for about 20 years,’ one woman said.

Another tagged her boyfriend and declared she would marry him tomorrow if he made the pastries for her.

One mother fried the pastries and arranged the empty shells on a wooden board beside pots of custard and other fillings to create a ‘pastry grazing platter’.

‘Beats dip and crackers,’ she said. ‘You just turn the pastry on the flat side and scoop your custard. [It’s] the best!’

Another said the recipe had finally convinced her to buy an air fryer.

‘This might be the one that tips me into purchasing – they look amazing,’ she said.

How to make Krispy Kreme doughnuts at home

– Half a cup of softened butter or margarine

– Three quarters of a cup of white sugar

– Half a cup of water

Before starting the dough, make sure you have a large, round cookie cutter to shape the mixture into individual pieces.

1. Add two cups of milk, one teaspoon of salt and half a cup of softened butter into a jug and heat in the microwave for one minute until warm.

2. Add half a cup of white sugar, half a teaspoon of nutmeg and four beaten eggs to the heated mixture and whisk until combined.

3. Pour the mixture into a large mixing bowl, adding two teaspoons of dried yeast and a quarter cup of sugar. Whisk again.

4. Add five cups of self-raising flour, one cup at a time, and mix well until the dough becomes thick and sticky. Leave dough to rest for one hour.

6. Roll out the dough and shape into individual pieces using a large, round cookie cutter, making a small hole in the centre to create the ‘ring’ doughnut effect.

7. Fry in canola oil in a deep-fat fryer or deep skillet pan at 340 degrees for two minutes on each side until golden brown and puffy, draining excess grease on a paper towel.

8. To make the classic Krispy Kreme glaze, add three cups of icing or confectionery sugar into a large bowl, along with half a cup of water and one teaspoon of vanilla essence. Mix until smooth.

9. Ice both sides of the doughnut and leave to set for 10 minutes before enjoying, still warm.