LORD BLUNKETT: Why we must stand up to Sir Nick Clegg and the shiny new Masters of the Universe who are neither liberal nor democratic

I remember first meeting a fresh-faced Nick Clegg in the lead-up to the 2005 General Election. He was the Lib Dem candidate for Sheffield Hallam, the constituency adjoining the one I was proud to represent for many years.

Clegg was seeking election to the Commons after his party’s sitting MP, Richard Allan, stood down to join an up-and-coming tech company called Facebook.

The new man struck me as someone worth watching: confident, articulate and clearly determined to do well for himself. The rest, as they say, is history.

Cosying up: Nick Clegg, David Cameron and George Osborne ‘are in thrall to the Californian tech titans’

Rising quickly through the ranks to become his party’s leader, he reached the heights of Deputy Prime Minister, somehow squaring his Lib Dem conscience to join David Cameron’s Conservative-dominated Coalition in 2010.

Of course, it might have helped that both men were Southerners from very rich families, educated at private schools and Oxbridge.

But then the good folk of Sheffield Hallam burst the Lib Dem bubble in 2017 and surprisingly returned the Labour candidate.

Chastened by defeat, and saying, ‘You live by the sword, you die by the sword,’ Clegg took a job with – guess who? – Facebook! A company so mighty that it has no fear of national governments, let alone mere citizens. A company, too, that he had previously criticised for its apparent approach to minimising the taxes it paid and what he called a ‘grating culture’.

I’m sure Sir Nick Clegg, as he is now, will be comfortable in Silicon Valley, California, and not just because he can cycle to work in shorts and sandals. This is, after all, the land of 24-hour virtue signalling, where preaching to others sits alongside the acquisition of enormous rewards. 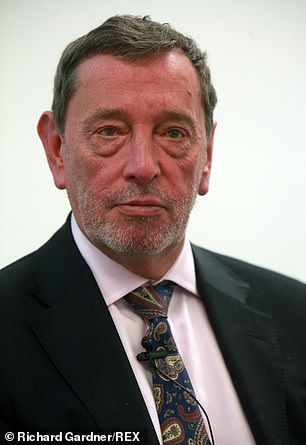 LORD BLUNKETT: I remember first meeting a fresh-faced Nick Clegg in the lead-up to the 2005 General Election

Like Google, Amazon and the other US tech giants, Facebook continues to expand its profits and its global influence over our lives with every passing day.

As head of global affairs, the genial Sir Nick is the liberal face of a profoundly illiberal organisation. And woe betide those who dare to disagree.

When, for example, the democratically elected government of Australia dared to say that tech giants should pay something to newspapers whose stories they routinely lift and recycle, the potentates of Facebook responded in the way we now expect. With a ban.

Facebook withdrew news from its service in Australia until the government reached a compromise, caring not a jot that it denied the public access to vital health and emergency information.

Equally disturbing was Facebook’s attitude towards free speech. When internet users attempted to discuss the growing evidence that Covid-19 might have first escaped from a Wuhan laboratory specialising in dangerous viruses – a story on which The Mail on Sunday has led the way – Facebook, which makes proud claims about its openness, censored the subject and barred mention of the claims.

Only now that President Joe Biden has endorsed further investigation into the Wuhan laboratory has Facebook changed its mind.

In a world of conspiracy theories and geopolitical power games, who knows the truth?

But Joe Biden needs to tread carefully, for the Silicon Valley giants can be fickle. Facebook spent years allowing incendiary statements by Donald Trump to drive up user numbers and advertising revenue. Until, that is, the President fell from office and the tech titan preferred to ‘cancel’ him completely, as did Twitter.

Of course, Sir Nick and Facebook say they are a ‘platform’, not a publisher. So, when faced with complaints that it hosts images of appalling child sexual abuse, lies spread by Russian trolls or damaging conspiracy theories about Covid vaccinations, Sir Nick and his team insist they are blameless because they have not created the material.

Freed from the strict rules that govern traditional publishers and broadcasters, Facebook can concentrate on making unimaginable profits ($9.5 billion, or £6.6 billion last year) as it imperiously professes to ‘give people the power to build community and bring the world closer together’.

This influence peddling has now reached a new and dangerous level, with reports that Facebook (which has denied involvement) and Google have secretly interfered in the appointments process of the British media regulator, Ofcom. It is absolutely not the business of global giants based more than 5,000 miles away to meddle in such appointments, even if they think it’s their God-given right.

So why would Californian tech giants care? Perhaps because Ofcom is about to be given the power to hold companies such as Facebook to account for any damaging content they publish – and publish is the correct word.

But the bigger question is this: how has Silicon Valley gained such a position of influence in the way we run our country?

For an answer, look no further than Sir Nick and his fellow Coalition partners, David Cameron and George Osborne, who went out of their way to cosy up to the Californian behemoths. The former Prime Minister, for example, is a close friend of Rachel Whetstone, a former Tory aide who became head of Google’s public relations. She is married to Cameron’s former strategist, Steve Hilton. Eric Schmidt, Google’s former chief executive officer, was on Cameron’s Special Business Advisory Board when he was Prime Minister.

Is that why, in 2016, Google was allowed to pay a mere £130 million settlement in unpaid taxes for a six-year period, despite the vast scale of wealth it generated in this country? That £130 million is said to have been an effective tax rate of three per cent at a time when corporation tax was 20 per cent.

Separately, Cameron and Osborne face questions about what influence they may have brought to bear when the internet-based taxi service Uber faced limits on its activities in London. Whetstone once worked there, too. No wonder that Facebook bosses think they, too, can hold sway in Westminster.

If the likes of Clegg, Cameron and Osborne are in thrall to these tech titans, so are a number of key Establishment figures and their supporters.

Who will stand up to these men and women if our politicians, the professional classes or the members of our increasingly out-of-touch elite seem so bewitched?

Our priorities should be reversing the disintegration of our towns and villages, the hollowing out of our institutions, and the steady destruction of national government by global financial interests.

Meanwhile, former Ministers earn seven-figures salaries to serve our new ‘Masters of the Universe’ who are neither liberal nor democratic.