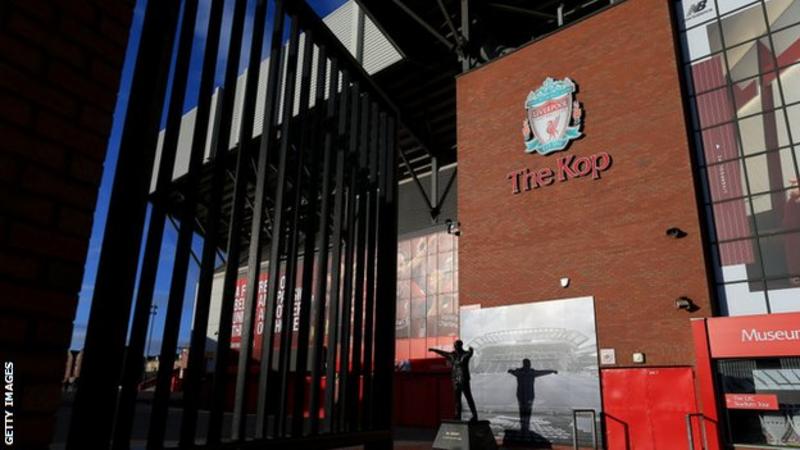 Staff affected will receive 80% of their salary through the government’s job retention scheme and the club will make up the difference.

Newcastle, Tottenham, Bournemouth and Norwich have already announced they will furlough some non-playing staff.

The league is suspended indefinitely because of the coronavirus pandemic.

A Liverpool statement said: “Even prior to the decision on staff furloughing, there was a collective commitment at senior levels of the club – on and off the pitch – with everyone working towards a solution that secures jobs for employees of the club during this unprecedented crisis.

“There is ongoing active engagement about the topic of salary deductions during the period matches are not being played to schedule. These discussions are complex and as a result the process is ongoing.”

There was criticism when Newcastle and Tottenham became the first Premier League clubs to announce they were placing non-playing staff on furlough.

Health secretary Matt Hancock said Premier League players should “take a pay cut and play their part” during the pandemic.

Since then, Premier League clubs have said they will ask players to take a 30% pay cut in order to protect jobs.

All 20 top-flight clubs have agreed to put the proposed “combination of conditional reductions and deferrals” to players, during a video conference call between the Premier League and players’ union the Professional Footballers’ Association on Saturday.

The Premier League has also said it would advance £125m to the EFL and National League, and give £20m towards the NHS.

Liverpool are 25 points clear at the top of the Premier League, needing two more wins to become English champions for the first time since 1989-90.

Their statement added: “While our priority from the outset has been to focus primarily on the health and wellbeing of our players, staff, supporters and local community, the club has also committed to playing as full a role as possible in the Premier League’s ongoing response to the crisis.

“As such, we welcome yesterday’s announcement from the Premier League which confirmed the provision of support for the National Health Service, the EFL and National League and a commitment for the 2019-20 season to resume only when it is safe to do so.”

A member of staff who works at Liverpool, and did not wish to be named, told BBC Sport: “The club call their staff their family – I’m not feeling like a family member.

“Why is a club that turns over £100m using a government scheme for its staff when other businesses are more in need of it?

“I feel disappointed and I’m feeling that this government scheme could be used by businesses in trouble.”

The member of stuff added that they were “disappointed, especially after Everton said they were not doing it”.

Liverpool said they were aiming “to protect the best interests of the club and our staff in both the short term and the long term, with all such actions being undertaken following various internal discussions”.

The statement continued: “In some instances, further measures will follow only once all parties are in a position to proceed and updates will be provided as and when this is the case.”