SOUTHAMPTON failed to get the morale-boosting win they wanted ahead of Sunday’s FA Cup semi-final against Chelsea.

Judging on the evidence of their latest pitiful performance, Antonio Conte’s men may as well book their hotel for the final now. 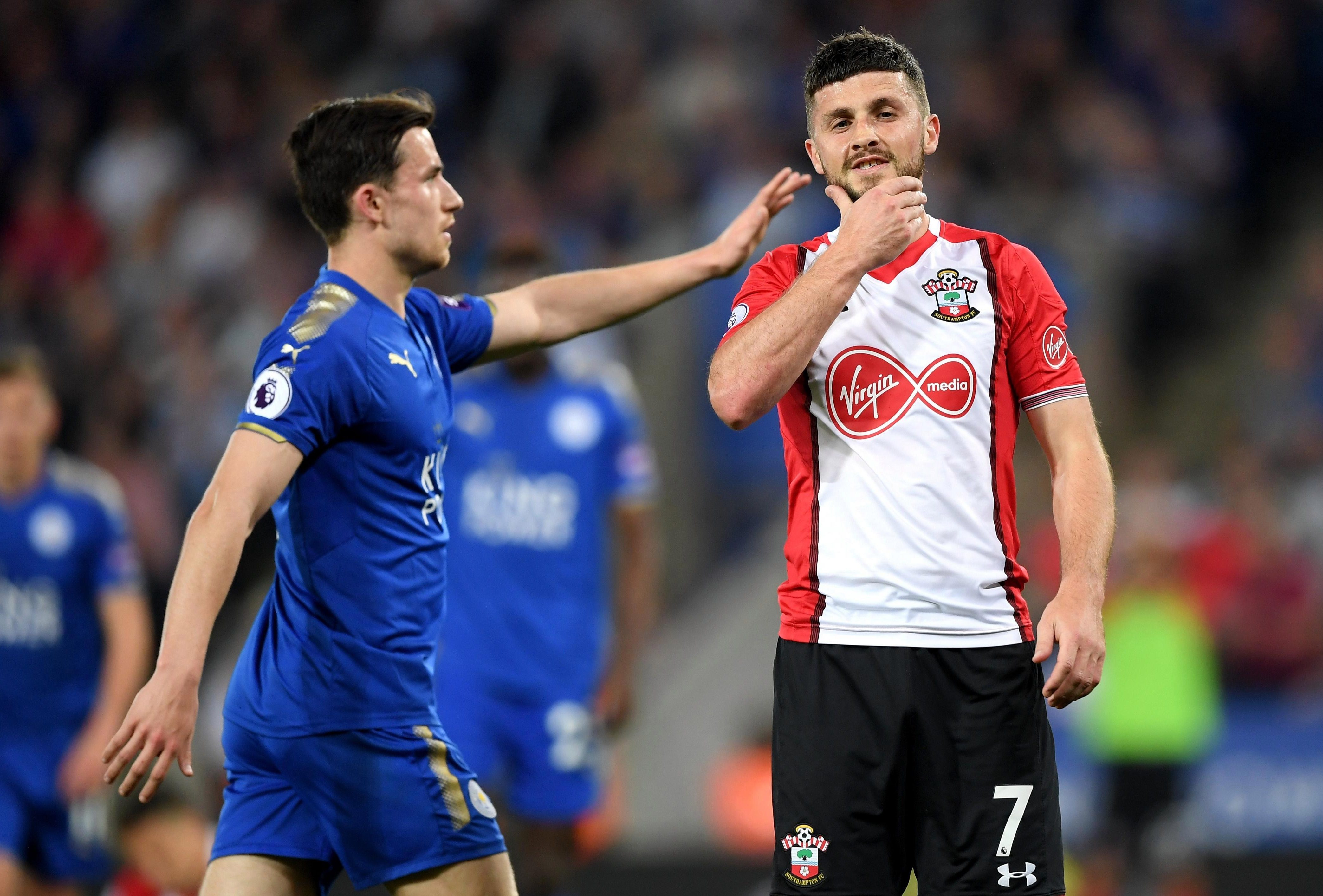 If the threat of imminent relegation couldn’t scare this sorry Saints side into a performance it’s unlikely they are going to trouble last season’s champions at Wembley.

Jamie Vardy came closest to breaking the deadlock in front of watching England boss Gareth Southgate, when he took Marc Albrighton’s through ball in his stride on the volley.

However his left foot shot was expertly tipped over by Alex McCarthy midway through the second half, while Riyad Mahrez flashed a shot narrowly wide near the end.

But that was about as lively as this tepid affair got and though Leicester could be excused – what the hell were Saints playing at? 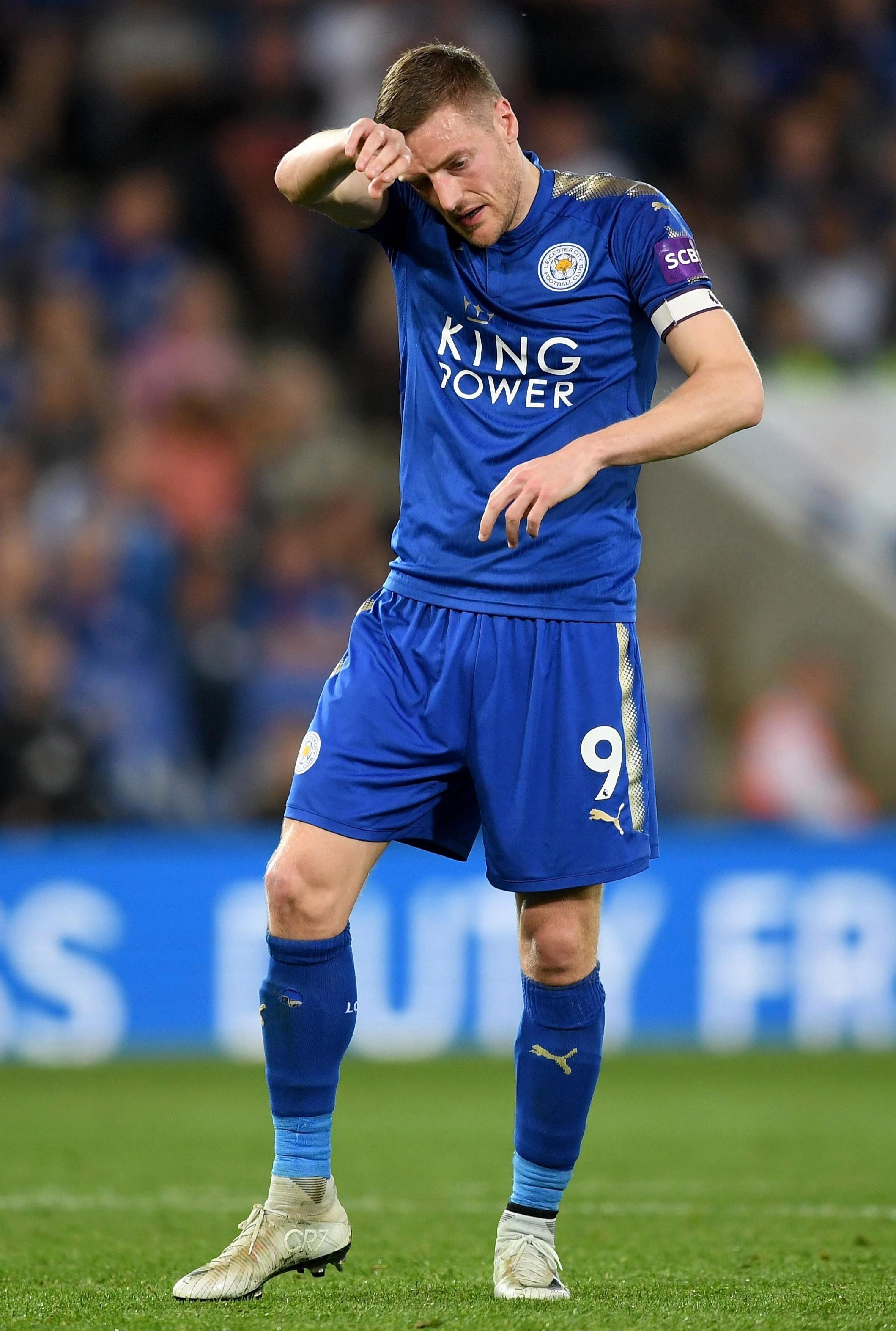 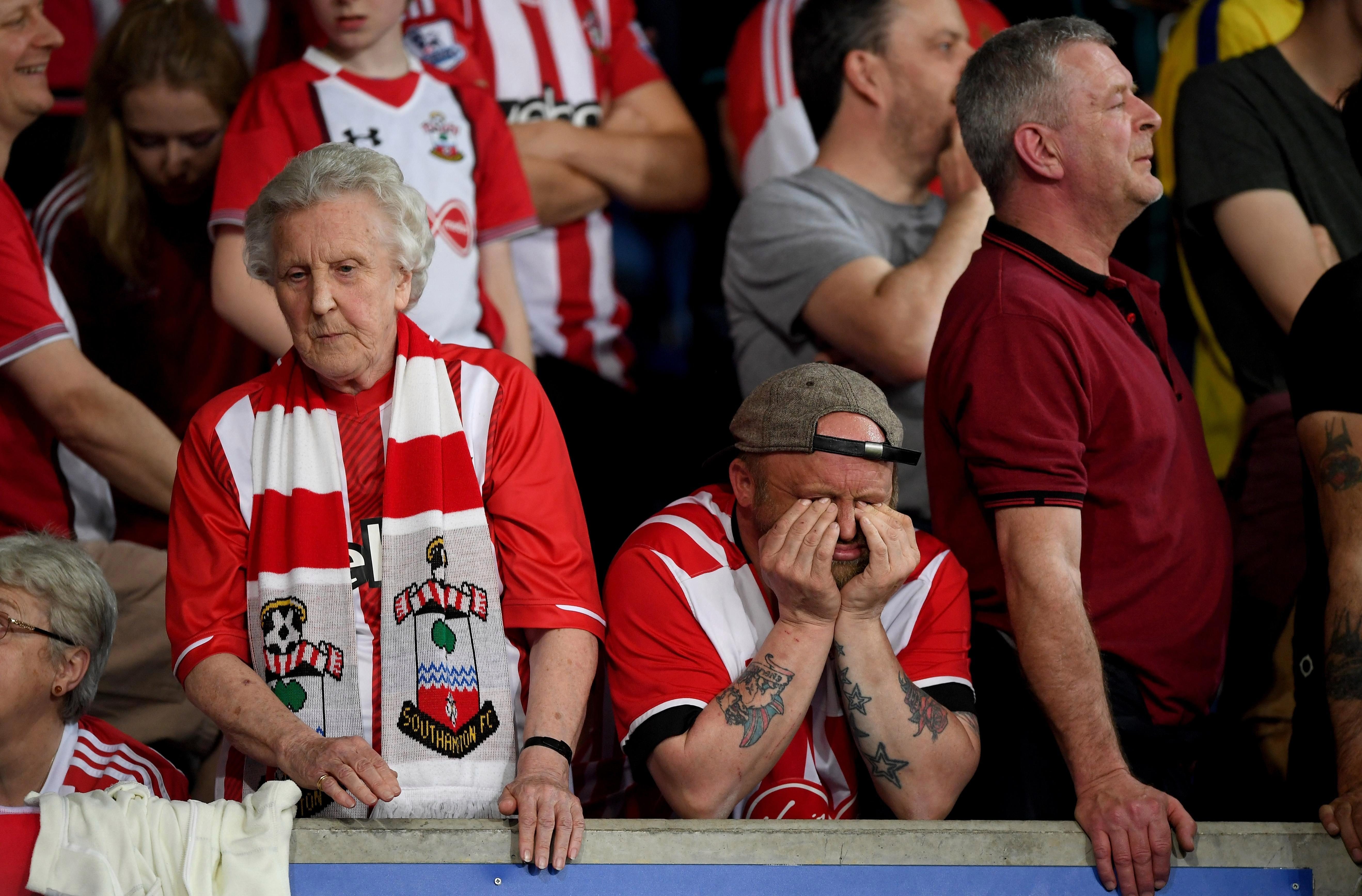 Mark Hughes' strugglers simply had to end a dismal run which had seen them win just once in their last 20 Premier League games.

Even that rare success had come in a 3-2 against rock bottom West Brom in March and clearly hadn’t provided the shot in the arm their anxious fans would have hoped for.

With five games left to pull out of their tailspin it was pretty much now or never for Hughes’ side who end the season with a treacherous final day fixture at home to champs Manchester City.

Four straight Prem defeats had done nothing for fragile confidence but Sparky kept faith with the same side which had stormed into a 2-0 lead against Chelsea on Saturday – before blowing it! 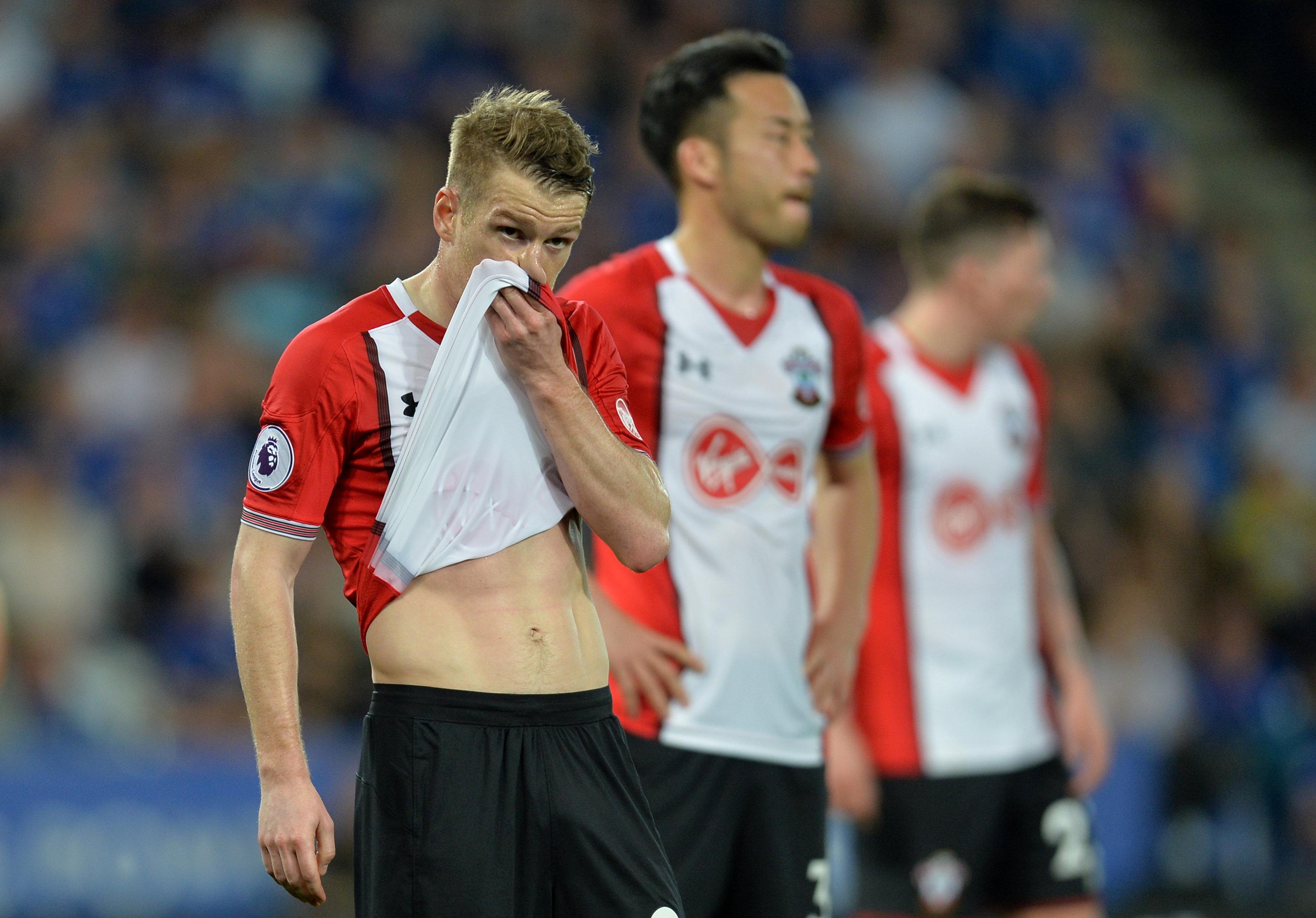 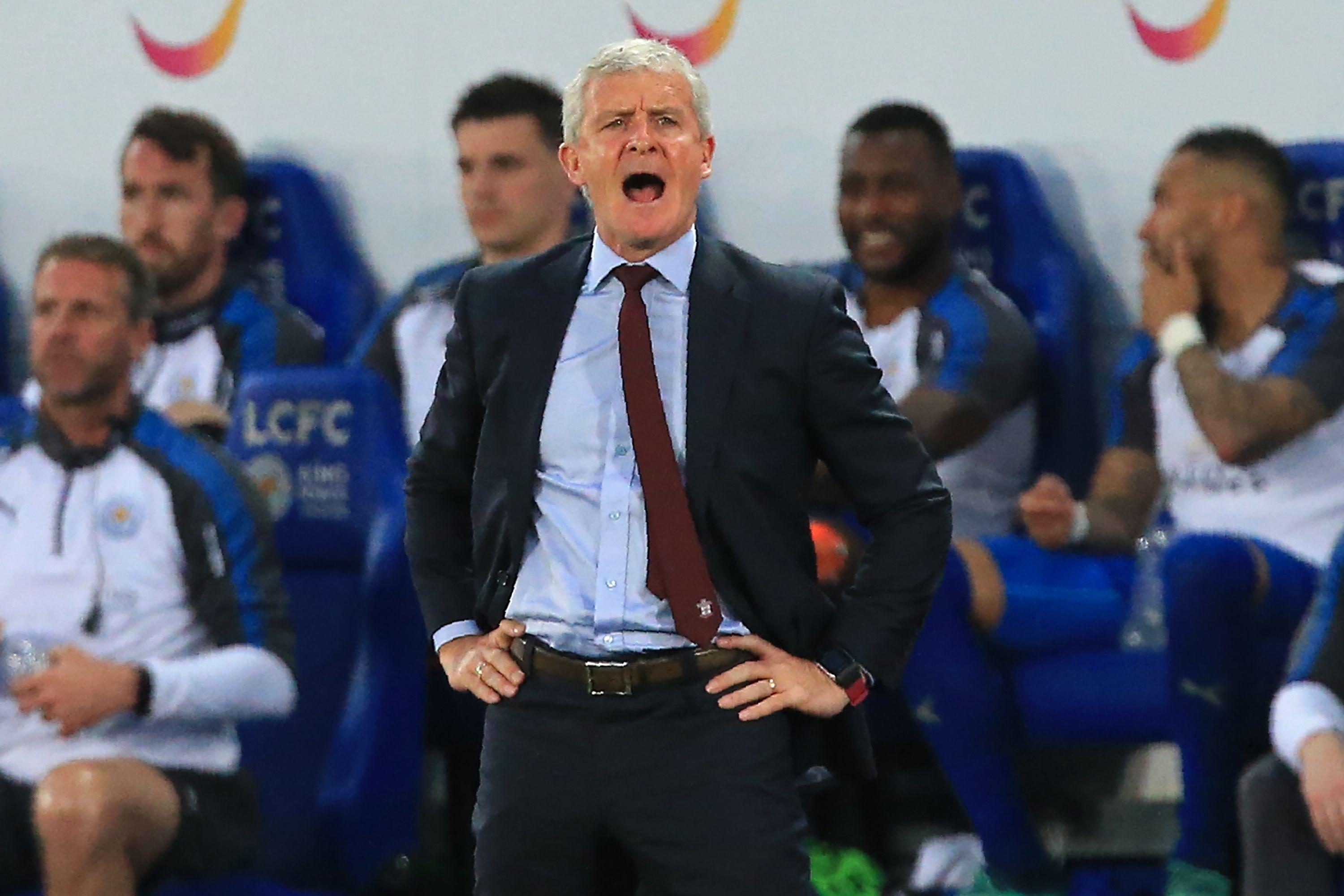 Leicester meanwhile were at the opposite end of the spectrum with little more than pride left to play for after their weekend defeat at Burnley left them nine points adrift of Sean Dyche’s Euro-chasing Clarets.

The fact Claude Puel made five changes from Turf Moor was seized upon as a sign the Frenchman was “changing the old guard,” especially as Wes Morgan was demoted to the bench, leaving Jamie Vardy to assume the captain’s role.

However Kasper Schmeichel was injured and so was Shinji Okazaki, so it could just as easily been a manager freshening up his side at the end of a gruelling season.

Where Mahrez fits into Puel’s plans is anyone’s guess.

However, most folk who are fond of a flutter would hazard a wild guess at Manchester City, the home of the champions. 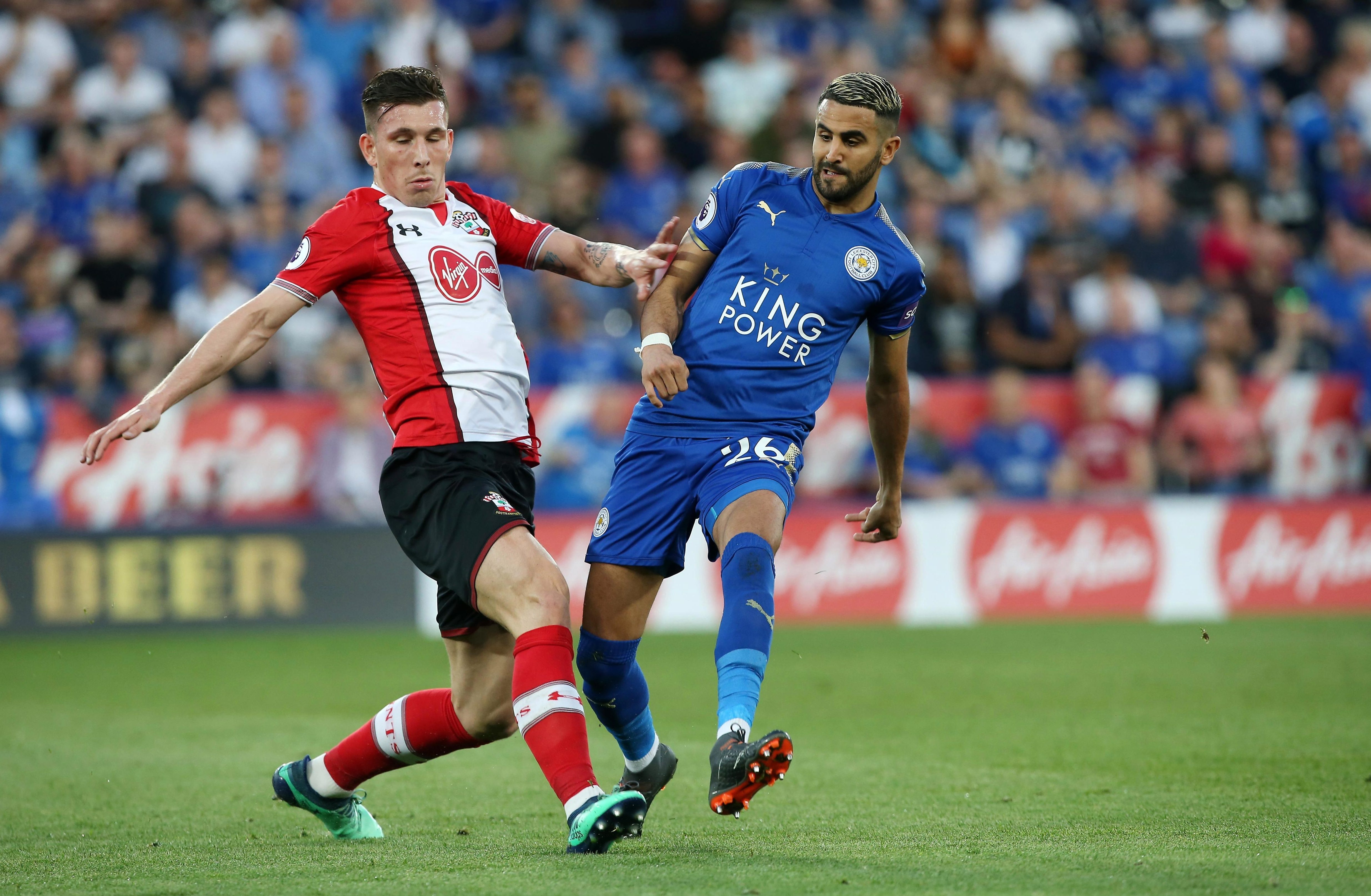 To his credit, Mahrez has kept his head down since recovering from his depressed state after the Foxes rejected City’s offer of £65million plus Patrick Roberts.

And he was the first to show any sign of intent when he drilled in a shot from the edge of the box which Alex McCarthy smothered.

Leicester were no great shakes and, frankly, looked there for the taking. But not by this Saints side who were too timid by far at the sharp end of the pitch.

You can only presume Hughes has pointed out the urgent need to start collecting three points rather than one. 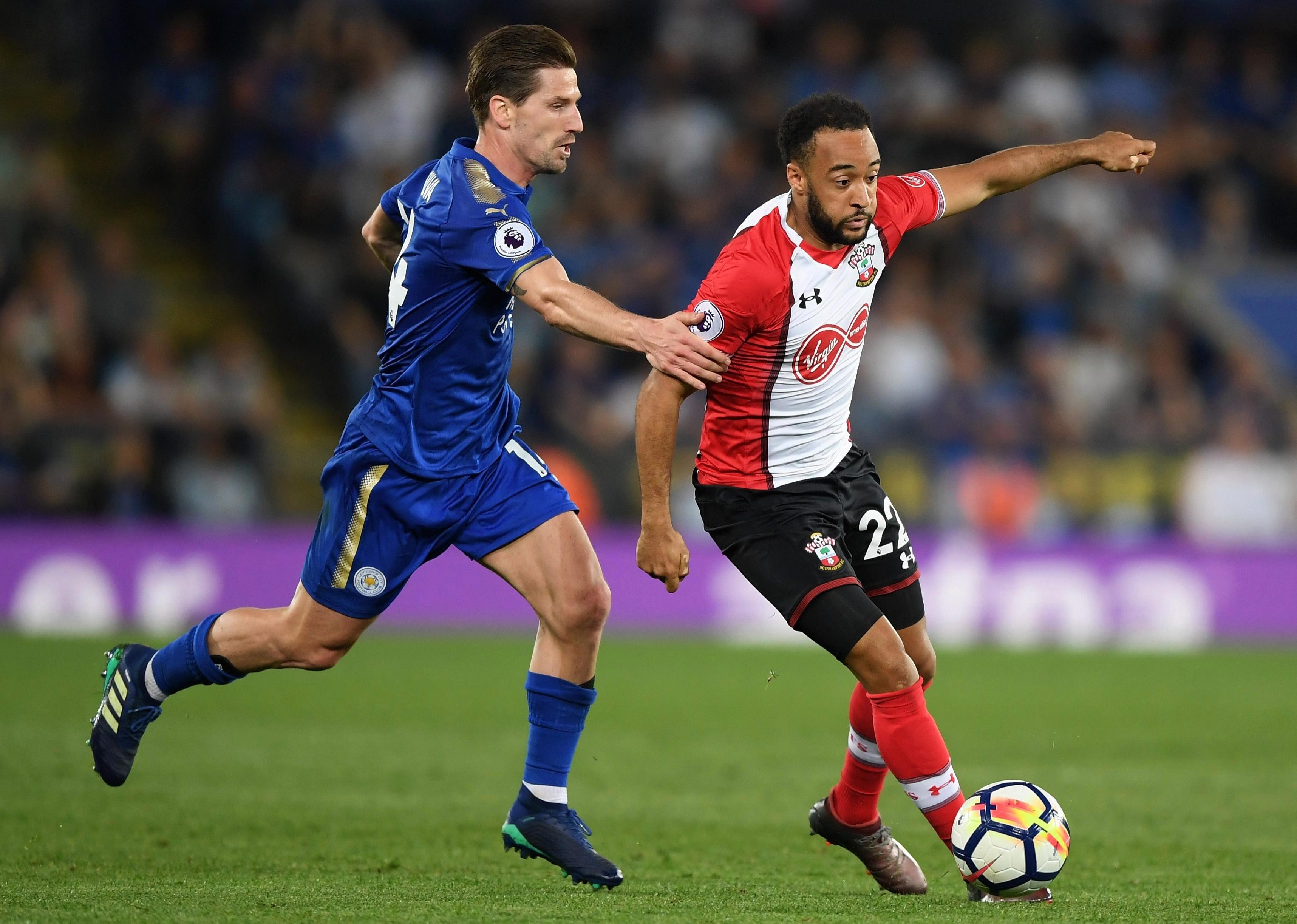 But there was one glaring example of Saints’ feeble attempts to trouble Leicester’s stand-in goalie Ben Hamer during a dismal first half.

Pierre-Emile Hojbjerg sent Shane Long away in the inside left channel and Harry Maguire, the only Foxes defender in the vicinity, hesitated.

Any other striker would have seized on the opportunity to rifle in a shot given so much time and space.

However Long showed all the confidence of a man who has scored just twice in 33 appearances this season. 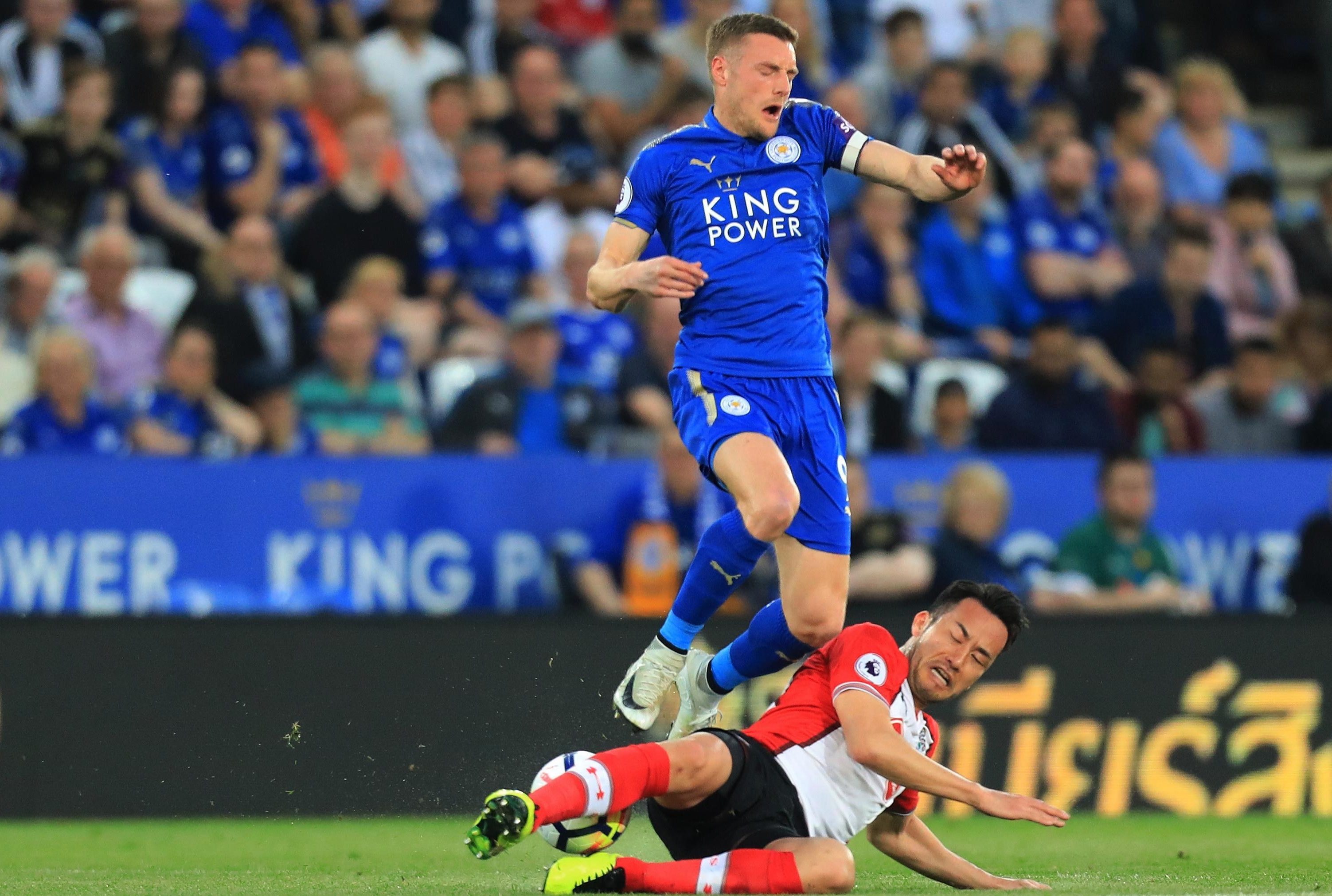 most read in football

The Republic of Ireland striker practically cork-screwed himself into the turf trying to produce the most complicated reverse pass to Dusan Tadic – and watched in anguish as his awful pass trickled into Hamer’s waiting gloves!

Hughes – not exactly known for such subtleties when he led the line – whirled round in frustration and looked as if he couldn’t wait for a ‘chat,’ at half-time.

At the other end Oriol Romeu was similarly hesitant when Kelechi Iheanacho had a shot blocked by Maya Yoshida. 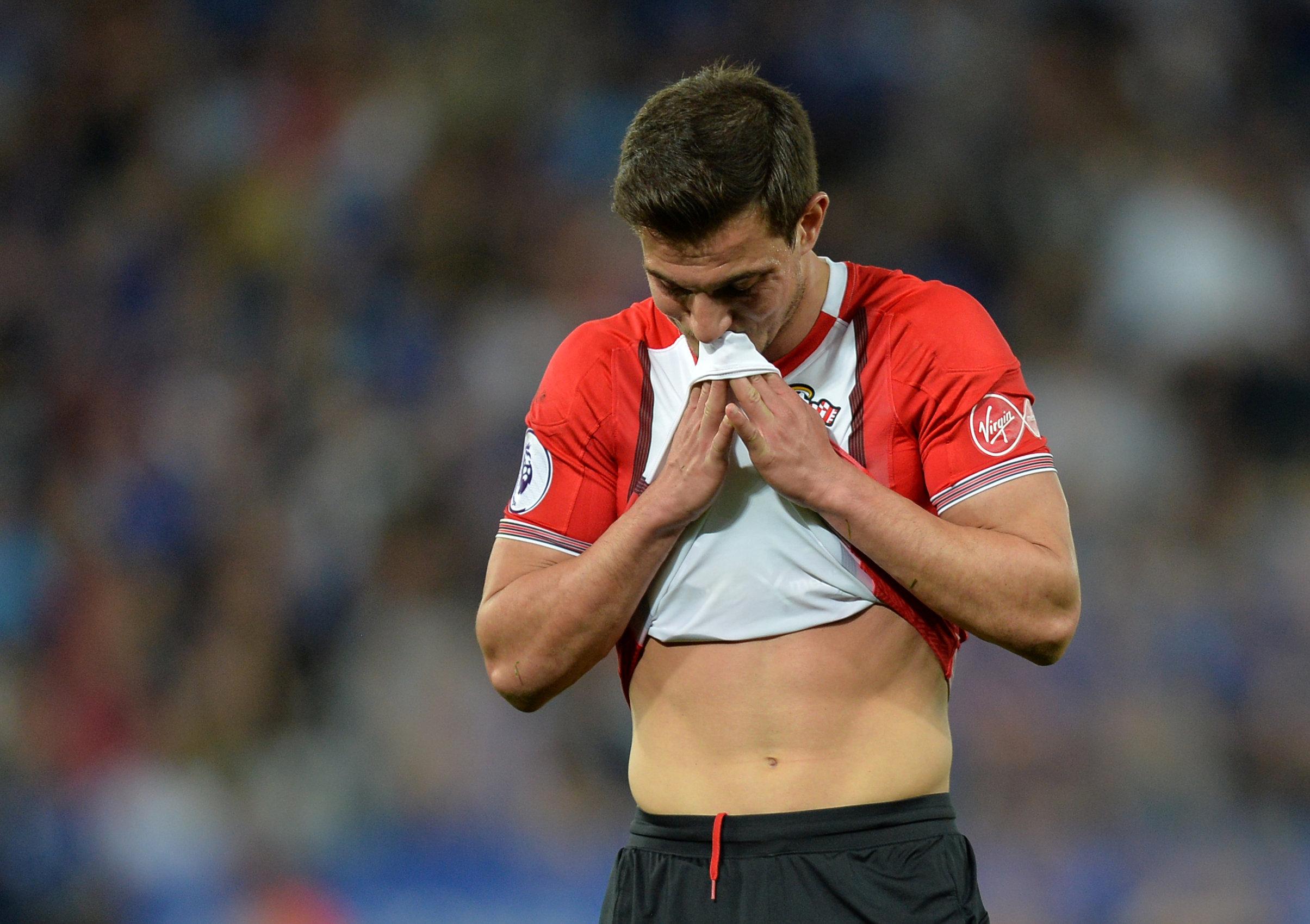 Although the Nigerian striker landed on his backside, he still found time to get back on to his feet and waltz round Romeu who seemed hypnotised as he watched and waited for events to unfold.

That I am afraid has been Saints' attitude for too long this season – let’s wait and see what’s around the next corner, our fortunes are bound to change soon.

However they look a club in free-fall after selling off too many family jewels and it’s hard to see how they stop the rot now.

Long was presented with another decent chance after the break when Tadic’s shot was deflected into his path. But his shot on the turn, from inside the six yard box, was blocked Schmeichel-like by Ben Hamer. 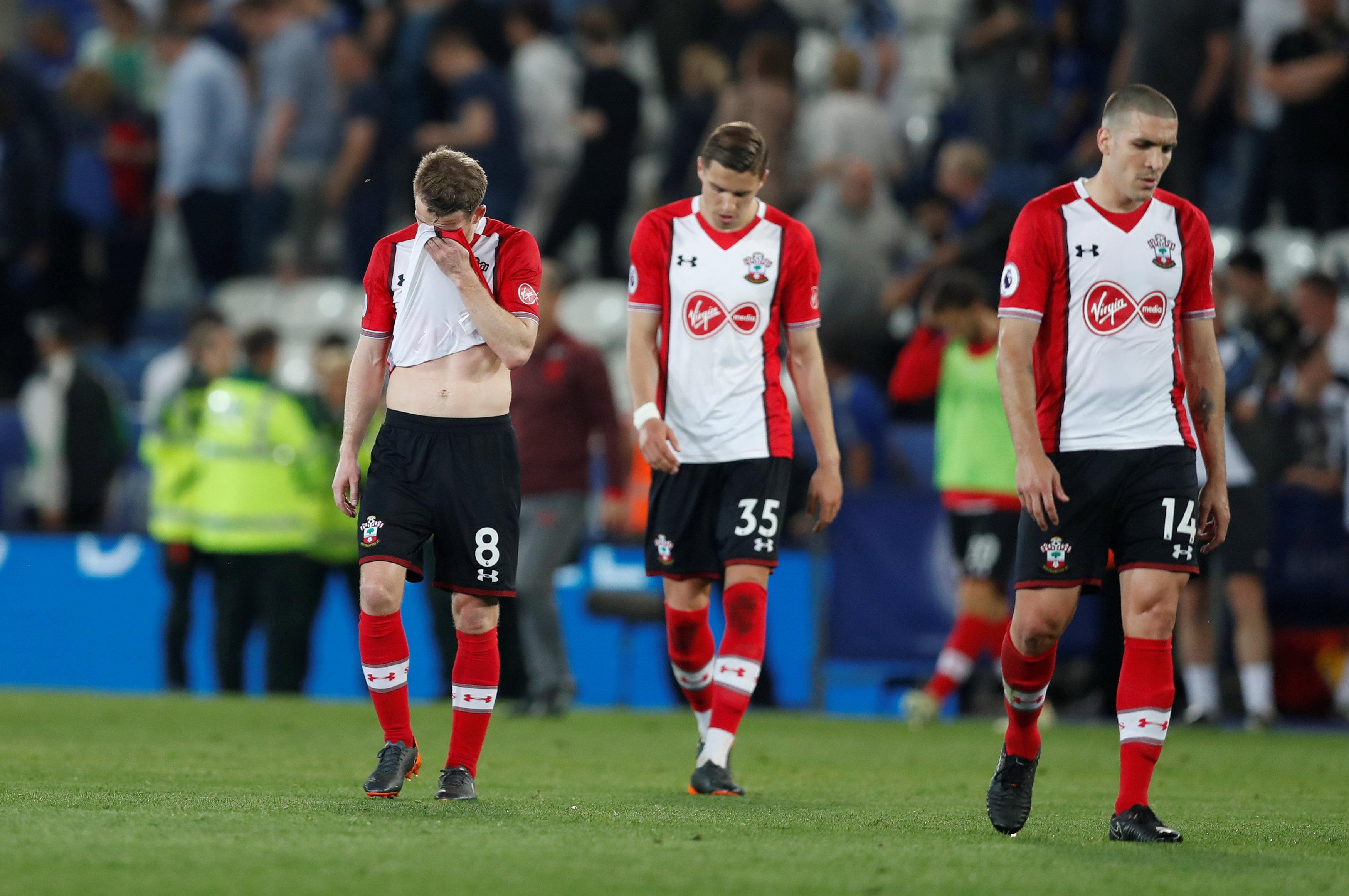 Hughes held his head in his hands and sent on Steve Davis for James Ward-Prowse who looked a shadow of the kid who was seen as a world cup hopeful not so long ago.

If Saints do fall through the trapdoor into the Championship this summer the ‘For Sale,’ signs will be looked out again.

Perhaps Saints Chairman Ralph Kreuger should have had a word with Foxes owner Vichai Srivaddhanaprabha, who knows a thing or two about resisting big-money offers for star his best players.

Canadian Kreuger used to be an ice-hockey pro and coach – which seems appropriate for a club currently on a very slippery slope.