It's not only the Prime Minister's family who regard jigsaws as "absolutely essential" to surviving home life over the next few months.

Retailers say sales of jigsaws are at record highs. And families working and studying in close quarters are never more likely to lose it. A piece that is.

Clare Gordon who is a shop assistant at Discount Toy Company is being rushed off her feet with orders for puzzles and games. Credit:Dominic Lorrimer

The hottest toys and games item in the "movers and shakers category" on Amazon.com.au is a jigsaw puzzle roll up mat. Sales are up 14,493 per cent.

Made out of felt, a reviewer said it did just what it promised: Made it easy to move and store puzzles – without losing a piece – of up to 1500 pieces.

After the Prime Minister Scott Morrison said on Sunday that his wife Jenny had ducked out on Saturday to buy jigsaws to entertain their two daughters over an extended period at home, sales rose further. 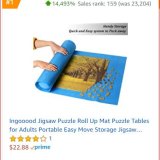 This mat allows an unfinished puzzle to be rolled up and put away is topping the sales of hot items in toys and games for amazon.com.au.

"Our kids are at home now, as are most kids, and Jenny went out yesterday and bought them a whole bunch of jigsaw puzzles. I can assure you over the next few months, we're going to consider those jigsaw puzzles absolutely essential," he said.

Owner Chris Marlow of the Jigsaw Store, an online store based in Sydney, said sales had increased substantially over the last fortnight. On Monday the company had its biggest day of sales. "So the PM's comments may have contributed to that," Mr Marlow said.

The Puzzle Palace is warning shoppers that due to extremely high demand, and low stock, dispatch time was six days.

Sales of puzzles are up everywhere. The Wall Street Journal in New York reported this week that nine of the top 10 items shoppers searched for on Amazon's American site last Tuesday were antivirus cleaning supplies or personal-hygiene products (toilet paper).

But "No. 7 was "puzzles for adults," reported the WSJ. "More people were hunting desperately for jigsaw puzzles that day than Clorox wipes."

Ruth Wormald, co-owner of the Discount Toy Co in Asquith, said sales of jigsaws were as busy as Christmas but without the usual stock and staff.

"We are mostly sold out," she said. The biggest increase in jigsaw puzzle sales was those for adults. The company has employed new staff, and has two shifts running.

In Canberra, the Webb/Rickard family rediscovered jigsaws when the pollution from the bushfires in February kept them inside. They are continuing the tradition. 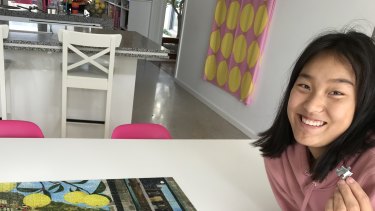 Jasmine Webb holding one of the thousand pieces of the jigsaw, Cats of Positano.

Public servant Delia Rickard said she often stopped late at night or early in the morning to add a piece to the puzzle, The Cats of Positano.

"They're such fun. It is great for mindfulness, and you just sit there as a family and work together," Ms Rickard said.

After a weekend of effort by the family, the thousand piece puzzle was finished and will be passed on to another family nearby.